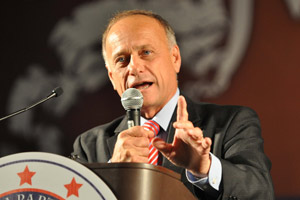 Rep. Steve King has compared border-crossers to livestock, asserted that President Obama “favors the black person,” and described illegal immigration as a “slow-motion terrorist attack.” Last summer, the Iowa Republican proclaimed that he would support amnesty for illegal immigrants under just one condition—that “every time we give amnesty for an illegal alien, we deport a liberal.” Since Tom Tancredo left office in 2008, King has risen to take his place as the right’s biggest anti-immigration flamethrower. Now he’s preparing to wage an even bigger assault under Republican-controlled House. King is very likely to become the next chair of the House Judiciary’s subcommittee on immigration, working together with Judiciary’s incoming chairman, Lamar Smith—another immigration hawk who’s vowed to put a crackdown at the top of his agenda.

King has already begun laying out his plan to get tough on immigrants in the next Congress, vowing to push legislation that would ban birthright citizenship. “[W]e will have the votes in the House to put an end to the anchor babies in this country,” King told conservative site Newsmax last week after the election, referring to the US-born children of illegal immigrants. He continued: “We need to put the marker down and push this thing forward. If we can’t get it past the president, then at least we will have made the case for the president, and have set the stage.” He’s also pledged to push bills that punish employers for hiring illegal immigrants and outlaw so-called” sanctuary cities” that have refused to target illegal immigrants.

Rep. Zoe Lofgren (D-Calif.)—the current subcommittee chair whom King will be replacing—calls his approach to the issue “over the top…he is very far out there.” Lofgren adds that she isn’t even sure if the House Republican leadership “will let him go that far,” describing King’s proposals as “very punitive, very anti-immigrant.” But there’s even more that King has in store. Echoing Rep. Darrell Issa’s impending assault on the Obama administration—promising to hold over 200 hearings as chair of the House Oversight Committee—King plans to grill the Obama administration about its immigration enforcement policy, telling Politico that he wants to bring Attorney General Eric Holder and Homeland Security chief Janet Napolitano before the committee, among others.

Immigration advocates say that King simply intends to create more rabble-rousing political theater and inflame the masses—particularly as nearly all of his proposals stand little chance of passing the House, let alone the Senate or the president’s desk. “A lot of it is theatrics, really using the bully pulpit of committee majority position to push these things out there and stir things up. It wouldn’t necessarily result in legislative [victories],” says Mary Giovagnoli, director of the Immigration Policy Center. She adds that the oversight hearings are meant to hammer home the message that “Obama has failed to enforce the law” on immigration—even though the current administration is deporting even more immigrants than under Bush, according to figures from the Department of Homeland Security.

King will certainly have a friend in Smith, the incoming House Judiciary chair, who’s pledged to place immigration front and center—and has also singled out the president for attack. Smith has a long track record as an immigration hardliner, leading the fight to pass a 1996 law that empowered the federal government to deport a much broader array of immigrants. And he’s already zeroed in on some of his targets. “Instead of enforcing the laws, the Obama administration continues to ignore them,” Smith wrote in September. “Workplace enforcement of immigration laws has fallen dramatically…the Obama administration is also scheming to allow millions of illegal immigrants to stay and work in the United States and not be deported. That’s amnesty for law-breakers.” The Texas Republican has reiterated such criticisms since the election, promising to launch a full-out assault on these policies once he assumes his chairmanship.

Advocates for more restrictive and punitive immigration policies are thrilled by the prospect of both King and Smith taking the helm. Conservative immigration advocates were disappointed when the House GOP only made a “scant mention of border enforcement” and failed to “mention any and all forms of amnesty” in its “Pledge to America,” which laid out the party’s goals in the lead up to the election, says Bob Dane, spokesman for the Federation for American Immigration Reform. Now FAIR is confident that their concerns will gain a broader hearing under the new leadership. “Neither of these guys are newcomers to the immigration issue, and the first order of business will be a thoroughgoing examination into why the Obama administration has systematically dismantled immigration reform,” says Dane, accusing the administration of “detaining and deporting criminal aliens while pretty much giving all others a free pass.”

Moreover, despite the impending congressional gridlock, there’s one arena in which Republicans could score a legislative victory. Giovagnoli says that she expects a bill requiring employers to verify the citizenship of their workers could stand a chance in the next Congress. King and Smith have both pushed for mandatory use of E-Verify—a citizenship verification system that’s already in use at the state and federal level—and Blue Dog Democrats like Rep. Heath Shuler (D-N.C.) have supported such proposals in the past.

To be sure, the GOP also risks self-immolation if immigration hardliners like King and Smith are allowed to dominate the conversation. In the midterms, Democrats managed to stem the Republican tide partly due to a “firewall” of Latino supporters who swung for them in California, Nevada, and other states where Republican candidates espoused extreme anti-immigration rhetoric. The party risks further alienating the Latino vote ahead of the 2012 elections if it continues to demonize immigrants. In addition, putting the spotlight on the Obama administration will also give pro-immigration advocates the opportunity to make their own case for immigration reform—and air their criticisms of the federal government’s immigration policy. “It’s dividing families when everyone is law-abiding,” says Lofgren, referring to the administration’s deportation policy.

Given how far right Obama has already moved on immigration during his presidency—pushing a bill to ramp up border enforcement without making concessions to the other side—liberal advocates will need to stand firm if they want to keep the administration from going even further under a GOP House. Their conservative counterparts are already gearing up for the push. When the Republicans take power in the House, says Dane, “We’re going to hold their feet to the fire.”