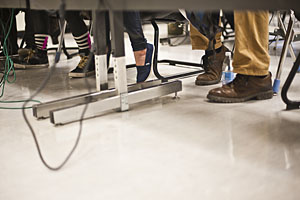 In the hot, crowded classroom of a San Francisco public high school one recent Sunday afternoon, a student I’ll call Yu twirls a yellow highlighter nervously while her 826 Valencia writing tutor, Kate Bueler, scribbles in the margins of her college application essay draft. Yu is stuck on the first paragraph. How best to convey the skills she acquired as a child translating for her Chinese immigrant parents? Or what it would mean to be the first person in her family to go to college, especially now that her father is out of work and her family is surviving on what her mother makes sewing alterations? The highlighter cap shoots off and bounces on the linoleum floor, puncturing the quiet intensity.

Bueler and Yu are sandwiched between dozens of tutor/student pairs here at Mission High, all peering with similar intensity at college application essay drafts, or huddled together around computer screens. This particular workshop—one of many offerings from 826 Valencia, the tutoring nonprofit founded by writer Dave Eggers—is meant to help low-income and immigrant college applicants like Yu, whose parents can’t afford private tutors and often don’t speak English. Since about half of the students in San Francisco’s public schools are considered low-income, and a third have lived in the US for less than two years, volunteers like Bueler can be enormously important. (PDF)

Because if Yu doesn’t impress the college admissions officers this year, she may lose the best chance she has to help her family escape poverty. “For most of these kids, this is their only shot,” explains Bueler, who also interns as a counselor at an inner-city high school in San Francisco. “Many of the low-income students I work with are asked to become adults very early in their life. They are pressured by their parents to make money. And if they don’t get into college right after high school, they won’t try again next year.”

After two hours of work, Yu finishes her first essay, and the three of us move to the snack room for a break. Local stores have donated apples, dried fruit and nuts, low-fat potato chips, sodas. I ask Yu what she wants to major in as we snack on potato chips. “Psychology,” she says without a pause. “Why?” I ask. She thinks for a while, but doesn’t respond.

We move back to the computer room, where Bueler asks Yu to describe an average day. Yu lists a densely packed schedule: Chinese, Economics, English honors, tennis. When she comes home at night, she helps her younger brother with his homework, then helps her parents translate mail correspondence or make online appointments that require English. She also does volunteer work, delivering food to seniors and cleaning up alleyways in San Francisco’s Chinatown.

Toward the end of the four hours I spend with her, Yu has a question. “I’ve had OCD (Obsessive Compulsive Disorder) since the eight grade. I was washing hands every 10 minutes then. Can I be a psychologist if I’m still in therapy?”

“Why do you ask?” Bueler wonders.

“My parents tell me that I can’t help others since I’m sick myself.”

Bueler responds without a pause. “But you’re doing so well now. You shook my hand, we’re working on this computer together, and you’re doing so much with your life.” Besides, she adds, “most psychologists are drawn to this work because they had some big challenges in their own life.”

Yu beams at Bueler and sits a little taller in her chair. 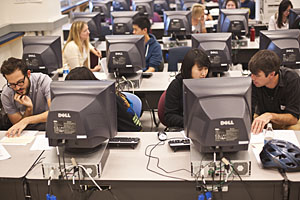