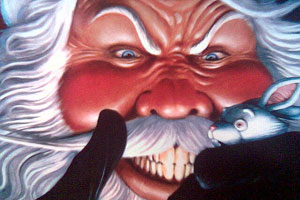 The Senate approved the controversial tax package on Wednesday, kicking the bill back to the House for a final vote. President Obama has asked the House to approve it without making any changes. The vote on the $860 billion tax package has proven controversial in green circles as well. The renewable-energy industry is cheering passage, while a coalition of the big environmental groups have united against it, arguing that the little good it does on energy is outweighed by major incentives for dirty power sources.

The green groups argue that the energy provisions of the bill “would, as a whole, take us backwards not forward on moving to a clean energy economy.” In a letter to representatives, the groups point to two portions—an extension of the incentive for turning coal into liquid fuel and the credit for corn ethanol. The former would provide a $0.50 tax credit for every gallon of liquid coal sold or used in the US—and liquid coal creates almost twice as much greenhouse gas pollution as regular old gasoline.

And, though corn-based ethanol is of dubious environmental benefit, the credit would cost more than $31 billion over the next five years. “Not only is the corn ethanol tax credit wasteful, but continuing to use scarce taxpayer dollars to support a mature, mainstream and polluting technology like corn ethanol will impede our ability to transition to the new, better-performing advanced biofuels we need,” wrote the groups, which included 1Sky, Friends of the Earth, Greenpeace USA, National Wildlife Federation, Natural Resources Defense Council and Sierra Club.

Meanwhile, the renewables lobby is cheering the inclusion of at least a few of the tax programs it was looking for to boost its industries. The package included a one-year extension of the Department of Treasury grant program for renewables, which gives businesses a cash grant for new projects, rather than making them wait for the 30 percent investment tax credit.

The Solar Energy Industries Association and the American Wind Energy Association both put out statements today praising the extension. SEIA noted that the program, which was originally created under the stimulus bill in 2009, has so far supported 1,100 solar projects in 42 states, leading to $18 billion in investment.

Does the grant program outweigh some of the not-so-great portions of the bill when it comes to renewable power? Not really. But at least there’s something worthwhile on energy in the package.