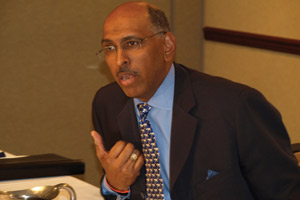 Photo from flickr user <a href="http://www.flickr.com/photos/wispolitics/3492062381/">WisPolitics.com</a> used under a Creative Commons license.

UPDATE 4:40 PM: Michael Steele dropped out of the chairman’s race on Friday afternoon and endorsed Maria Cino as his replacment. In the next round of voting, Wisconsin Republican Party chairman Reince Priebus pulled ahead of the pack with 80 votes, needing 85 to win.

ORIGINAL POST: Officially, Republicans are meeting today to select a new chairman of the Republican National Committee. Unofficially, they are about to finally purge the party of any last vestiges of moderation.

The RNC’s 168 members will decide the fate of Michael Steele in a major vote to select their next chairman. The election has been closely watched, as Steele has been highly unpopular in many corners of the party. The race is also drawing a lot of attention because, for the first time, outside groups like the tea party-allied FreedomWorks have sought to influence the outcome.

It wasn’t so long ago that the RNC was headed up by former tobacco lobbyist and current Mississippi Governor Haley Barbour, who irked social conservatives recently by suggesting that there was room in the party for pro-choice candidates. Ken Mehlman, the RNC chair during the second term of George W. Bush, turned out to be a closeted gay man who has come out in support of gay marriage. But it was clear even last month at two debates for the chairman’s race that neither Barbour nor Mehlman would have a prayer of winning back their old jobs today. In the last RNC chair debate, Steele, the lone black man, was the only one of six candidates who rejected a narrow view of the Republican Party. He argued the GOP has room for some ideological diversity and that it might actually need those voices to appeal to the larger American public. He’s likely to go down in flames today, toppled by someone who has supported platform purity. Steele’s ouster is being engineered by a host of conservatives, most notably Indiana RNC represenative and GOP legal eagle James Bopp.

Last month, Bopp, the longtime counsel to the National Right to Life, joined with the tea party group FreedomWorks to host a forum for RNC chairman candidates in a very public effort to help unseat Steele. Bopp did not support Steele in the last election because of his involvement with the Republican Leadership Council, a political action committee co-founded by pro-choice former New Jersey Governor Christine Todd Whitman and other moderate Republicans who sought to make the party more socially inclusive.

Bopp has been on the forefront of a movement to shrink the GOP’s big tent and ensure that it only supports candidates who commit to a fairly limited conservative agenda, and who notably also don’t support positions in conflict with the RNC platform on issues like abortion. His activism in the RNC chairman’s race is as much an anti-moderate movement as it is an anti-Steele campaign.

Last year at this meeting, Bopp attempted to pass a resolution, commonly called the “purity pledge,” though he insists that it really should be called an “80 percent pure” test or the Reagan Doctrine. This, he explained to me, refers to the principle that if someone agrees with you 80 percent of the time, he’s your friend. The resolution would have required a viable candidate to hold positions in line with at least eight out of the 10 laid out by the RNC. Bopp’s resolution failed, but a similar measure succeeded.

The tea party has also spurred efforts to purge the party of moderate Republicans, and those are on public display in the fight over the next RNC chairman. (Those sentiments have also prompted a rules change that might be called the “Arlen Specter resolution,” which will force RNC-backed candidates to sign a contract requiring them to give back any committee money if they change parties down the road.)

Bopp didn’t offer up any resolutions this year, but he was at the RNC meeting this week working behind the scenes to elect a slate of candidates for RNC offices who would make sure that the RNC didn’t back any candidates who strayed too far outside the social conservative platform. Publicly, he is backing former Wisconsin GOP chairman Reince Priebus, who is leading in the votes to become the next chair. Bopp told me he decided to endorse Priebus, who had been the RNC general counsel under Steele, because he had been assured by many of his pro-life clients in Wisconsin that Priebus is a true conservative who played a key role in merging the state’s Republican Party with the tea party movement.

But Bopp could have pretty much supported anyone running for chairman this year aside from Steele. At a recent debate, it was clear that the slate of candidates challenging Steele was almost entirely homogeneous, all white but also universally committed to a narrow view of Republican orthodoxy. Bopp, who was at Friday’s event wearing a suit decorated with a host of campaign stickers for his various candidates, explained that the Barbour/Steele days are pretty much over. “The last three elections have demonstrated we must adhere to principle,” he said. “The last election showed that conservatism is universally popular. We tried moderate—nominating McCain [in 2008]—and we got the shit kicked out of us.”