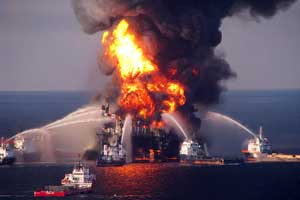 The April 20 explosion on the Deepwater Horizon that claimed 11 lives and unleashed 4.9 million barrels of oil on the Gulf of Mexico was caused by “a failure of management,” and the risk that resulted from a series of bad decisions “was both unreasonably large and avoidable,” concludes the National Oil Spill Commission in its final report.

The complete version of the much-awaited report isn’t due out until next Tuesday—but late Wednesday, the commission released one chapter of it that focuses on the causes of the blowout. It also released a list of the decisions made by rig operator BP, rig owner Transocean, and cement-provider Halliburton that could have contributed to the disaster. From the report:

The well blew out because a number of separate risk factors, oversights, and outright mistakes combined to overwhelm the safeguards meant to prevent just such an event from happening. But most of the mistakes and oversights at Macondo can be traced back to a single overarching failure—a failure of management. Better management by BP, Halliburton, and Transocean would almost certainly have prevented the blowout by improving the ability of individuals involved to identify the risks they faced, and to properly evaluate, communicate, and address them. A blowout in deepwater was not a statistical inevitability.

Among the bad decisions the commission highlighted: inadequate assessment and management of risks involved in the well design, the use of flawed cement provided by Halliburton, a misreading of a pressure test on the well, errant procedures on removing drilling mud, and “apparent inattention to key initial signals of the impending blowout.”

Draft portions of the report provided a preview of the latest release, which will be published in its entirety on Jan. 11. The commission’s chief counsel, Fred Bartlit, was careful to say in a pubic hearing last November that he did not see evidence that responsible parties on the rig had intentionally cut corners.

But the final report does make it clear that the commission has concluded that BP, Halliburton, and Transocean all made decisions that saved time when there were less risky (and more time-consuming) alternatives available. Of those nine critical decisions that the report lists, seven saved the drillers time. The report doesn’t assess motivations, however, and declines to state whether there was a conscious decision to cut corners: “Whether purposeful or not, many of the decisions that BP, Halliburton, and Transocean made that increased the risk of the Macondo blowout clearly saved those companies significant time (and money).”

But the report also does not reserve judgment just for BP and the other companies closely involved in the Deepwater Horizon; it indicates that industry-wide failures contributed to the disaster:

The blowout was not the product of a series of aberrational decisions made by rogue industry or government officials that could not have been anticipated or expected to occur again. Rather, the root causes are systemic and, absent significant reform in both industry practices and government policies, might well recur.

In the wake of the spill, a number of other oil and gas companies pointed the finger of blame at BP, arguing that the company had taken risks that they would not. But in a statement accompanying the chapter, commission co-chair William Reilly (former administrator of the Environmental Protection Agency under George H.W. Bush) indicated otherwise:

My observation of the oil industry indicates that there are several companies with exemplary safety and environment records. So a key question posed from the outset by this tragedy is, do we have a single company, BP, that blundered with fatal consequences, or a more pervasive problem of a complacent industry? Given the documented failings of both Transocean and Halliburton, both of which serve the off shore industry in virtually every ocean, I reluctantly conclude we have a system-wide problem.

The commission also concludes that the government’s efforts to prevent disasters like this were inadequate. “As this narrative suggests, the Macondo blowout was the product of several individual missteps and oversights by BP, Halliburton, and Transocean, which government regulators lacked the authority, the necessary resources, and the technical expertise to prevent,” it states.

The big takeaway from the chapter: “[T]he accident of April 20 was avoidable.” There will surely be much more to take away next week, when the commission releases the full final report—and policymakers suss out what the conclusions mean for the future of deepwater drilling.