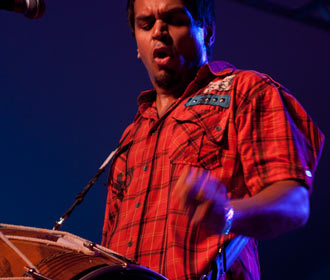 Enter tribal dhol beats on amphetamine followed by a race of trumpets, all percolating with the wanton energy of a two-year-old after a tray of Diwali sweets. That’s Red Baraat (baraat is the Hindi word for wedding procession). The nine-piece New York City-based dhol-n-brass band claims it’s the first of its kind in the United States, melding bhangra (see our recent interview with Panjabi MC) with brass-infused funk and jazz. Front and center is the dhol, a huge barrel drum that’s slung over the shoulder, using sticks to strike both heads, and the wooden sides, too.

Red Baraat’s 2010 debut CD, Chaal Baby, earned praise from music critics, and the band is headed back into the studio next month to record a second album, pretitled Shruggy Ji. The musicians also won bragging rights when one of their songs was selected as theme song for the closing credits to the recent movie The Yes Men Fix The World. I asked front man Sunny Jain for the lowdown on Red Baraat’s cultural and musical influences, and his social-justice side project, entitled Taboo.

Mother Jones: You mine so many different musical traditions for material. So who would you most like to bring back from the dead for a jam session?

SJ: “Analog Kid” by Rush, from their Signals album

SJ: I think I already have…haha. Coming from a jazz and Indian-music background, people don’t often think I’m into the type of bands I just listed. I also recently just started going on this Rush trip and I had forgotten how much that band made such an impact on me and how much I love their music just as much, if not even more now.

MJ: What’s your favorite 2010 release in your genre?

SJ: I’m not sure what my genre is, and to be honest, I’m not a huge fan of that word. I love all types of music regardless of what box it might fit in. Some bands I’ve been listening to a lot lately are Phoenix, Silversun Pickups, Bob Marley, Digable Planets, and a ton of Rush.

MJ: Your recent side-project album, Taboo, seems pretty controversial in the cultures (Sufi and Punjab) that the music is drawn from. How has it been received?

SJ: I honestly haven’t received anything but positive responses. Taboo is a set of new works I was commissioned for by Chamber Music America in 2007. I was then commissioned in 2009 by The Aaron Copland Recording Fund to release the music commercially. The project started through a desire and a sense of obligation to use my music as a platform to address social justice issues, and specifically speak to the South Asian community, where these matters are often considered taboo: sexual orientation, inequality, violence upon women, and the juxtaposition of religions. The artistic inspiration was derived from ghazals, love poems that have their origins in the Arabian Peninsula and eventually made their way to India in the 12th Century.

Each composition draws upon one Indian raga to present a mood specific to each work. While the music in its entirety is influenced by the Indian and African diasporas, the players bring their own unique musical personalities, and collectively we aim to blur the lines of genre. At the end, I hope this music reflects the creativity of humans, connects to one’s heart, and inspires people to greater heights of goodness towards all living beings. The players on the album are spectacular: Marc Cary (piano), Nir Felder (guitar), Gary Wang (bass); vocalists Achyut Joshi, Sheetal Karhade, Samita Sinha, Shayna Steele, Sachal Vasandani; and spoken word by YaliniDream. The lyricists are Ali Mir, Ifti Nasim, Vikram Seth, Erin Thomas, and Kishwar Naheed.

MJ: So does Red Baraat ever perform at weddings, as the name would imply?

SJ: Red Baraat actually has its roots in an Indian brass wedding band I started back in the summer of 2006. I was filling a void in what I thought was just the New York City metro area, but soon found out that this band was in great need across the country. In North India, it is not uncommon at all for a city to be home to 40 Indian brass bands. There is a very long and interesting history to brass bands in India dating back to the 17th Century, and you will typically find one at any North Indian wedding. For some years, I wanted to start a band like Red Baraat where the dhol was the lead Indian instrument, as opposed to a sitar, tabla, or Indian vocalist; where it was a big band; where all instruments were acoustic; where the sound and vibe of a large acoustic band would unexpectedly overcome people with exhilaration. I wasn’t looking to be an Indian brass band, but to be a band that reflected my complete identity as an American. The America I was born and raised in intersected with people of all ethnicities and beliefs and that, coupled with my parents’ instilling of good values, made me the individual I am now. Within Red Baraat, there are varied musical backgrounds and personalities and that lends itself to many great thoughts and ideas; it’s what makes social science, or more precisely, social interaction so interesting to me.

I specifically asked each member to join for the certain strengths each one brings. Drumset player Tomas Fujiwara had worked on the show STOMP for several years, in addition to being an accomplished jazz drummer. Percussionist Rohin Khemani has a background in Indian classical music as a tabla player. He has also played jazz, pop and been a drum-kit player to a world percussionist. Trumpet player Sonny Singh comes from a ska/reggae background and also adds dynamite vocals in Punjabi, Spanish, and English. Our sousaphone player, John Altieri, is a rare breed, bringing funky bass lines and rapping, too. Mike Bomwell plays tenor or alto saxophone, but mostly baritone sax. His flexibility and soloing ability is a great asset. Arun Luthra is our horn-section leader and plays soprano sax. Aside from his jazz background, Arun played South-Indian classical music and Afro-Cuban. Trombonist Smoota comes from a funk, R&B, and pop background. He has a sound that is unparalleled by any trombonist in the city. MiWi La Lupa, our bass trumpeter, is the glue in the horn section, hitting our melodies, soloing, but also creating some wonderful harmonies. He’s about to start singing and rapping in the group too. I handle duties on the Punjabi drum, dhol, rev up the audiences with vocal yells and punches on the mic, and lead the band into stories that unfold on the bandstand.

We made our first appearance in September 2008 and released Chaal Baby in January 2010. I still have an Indian brass wedding band that performs at weddings and Red Baraat will occasionally perform, but it’s getting harder because our touring schedule is really starting to pick up.