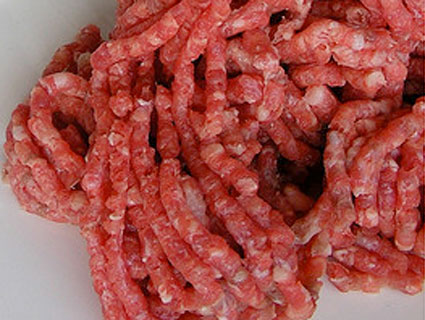 Would you like some salmonella with those budget cuts? If Republicans have their way, food safety could fall casualty to the congressional budget-cutting fervor. Buried in the House GOP’s budget bill, which passed last month and would axe $61 billion in spending, are major funding reductions for agricultural inspections. And consumer advocates warn that these cuts could escalate outbreaks of food-borne illnesses.

The House budget bill slashes $88 million from the agency that inspects the country’s meat and poultry, which could reduce its operations by 18 percent for the remainder of the year. The cuts to the Department of Agriculture’s Food Safety and Inspection Service could furlough thousands of inspectors and decrease the number of inspections at the nation’s slaughterhouses and meat-processing plants. With fewer inspectors on the job, the quality of inspections could also fall by the wayside, explains David Plunkett, a senior staff attorney at the Center for Science in the Public Interest: “They could be windshield inspections—when they show up, look through the windshield, and then drive off.”

Without sufficient monitoring, the risk of tainted meat in the nation’s food supply is likely to increase, Plunkett and other advocates say. “If the cows are not slaughtered appropriately and cleanly—if you’re not careful, manure is often on the hide,” which could in turn contaminate the meat with E. coli, salmonella, and other bacteria, says Chris Waldrop, director of the Food Policy Institute at the Consumer Federation of America. There’s also the economic impact to consider: Slaughterhouses may be forced to close if there are big cutbacks in inspections, since such facilities must be inspected daily to remain open. According to the USDA, the cuts would cost the industry some $11 billion in revenue and could raise the price of meat for consumers.

In addition to targeting the USDA, the House GOP’s bill also slashes $241 million from the food-safety budget of the Food and Drug Administration, which, among other things, could require the agency to furlough its 8,600 inspectors for an average of more than five weeks. The cuts could also gut the funding for the scientists responsible for examining contaminated products and determining how to detect tainted foods before they make people sick (or worse), according to Tony Corbo, a senior lobbyist for the group Food and Water Watch. And budget rollbacks could result in 10,000 fewer inspections of imported food, less than 1 percent of which is checked in the first place, according to Rep. Rosa DeLauro (D-Conn.), a member of a House appropriations subcommittee overseeing agriculture.

Children, the elderly, and those who are already sick face the greatest risk of becoming ill or dying from contaminated food. The Centers for Disease Control has reported that one out of every six Americans gets sick each year from food-borne illnesses—with 128,000 hospitalized and 3,000 dying from such ailments. In response to the growing public outcry over high profile recalls and deaths, Congress passed a bill in December to strengthen food-safety laws. But lawmakers still need to pass a separate bill to implement the Food Safety Modernization Act, which costs more than $1 billion to enact—money that will be that much harder to come by in the current political climate.

Republicans pushing such rollbacks insist that the country’s food supply is safe enough as it is, and they’ve railed against intrusive federal inspectors. Rep. Jack Kingston (R-Ga.) has been leading the effort to gut federal food-safety efforts as the new chair of the agriculture subcommittee of the House appropriations committee. “We have a lot of concerns about the necessity of putting 18,000 food police on the streets and the kitchens of America,” Kingston told Fox News’ Atlanta affiliate after the food-safety overhaul passed last year. He claimed that the country’s food supply is “99.99 percent safe,” adding: “Do you really need to hire 18,000 federal bureaucrats to tell the private sector what to do?”

Kingston’s criticisms echo those of the tea party activists who tried to kill the food-safety bill last year, warning that the government’s “food safety Gestapo” would crush small farmers and convert Americans to vegetarianism (see “The Tea Party’s Food Fight”). Though the Tea Party lost the battle at the time, they may be vindicated by Republicans who are now prepared to take an axe to existing food-safety efforts—and who are unlikely to back new funding for ramped-up inspections and regulations, even for a law that they voted through. Though Democrats have tried to defend food-safety inspections, there’s a $50 billion gulf between the GOP’s cuts and what the Dems have proposed, putting the funding at risk as both parties continue to wrangle over the budget.

State budget cuts could further endanger the nation’s food supply, advocates say. State officials are responsible for carrying out about half of the country’s food-safety inspections, as well as all inspections of restaurants, grocery stores, and other establishments. “State health departments are where we find out where the illness started from,” says Plunkett. “We need them on the state level to do those surveys—to figure out where the problem is and what to do about it.” Though states like Minnesota and New York have tried to ramp up their efforts in recent years in light of high-profile outbreaks, the fiscal emergencies facing states across the country are already weakening inspections. And some states have already started slashing food safety efforts: Indiana has taken an axe to its meat inspection budget, Iowa and Oklahoma have curbed restaurant inspections, and Pennsylvania has laid off egg inspectors.

“I’m worried,” says DeLauro. “The cuts are reckless—they both endanger our food supply and they endanger families and public health.”