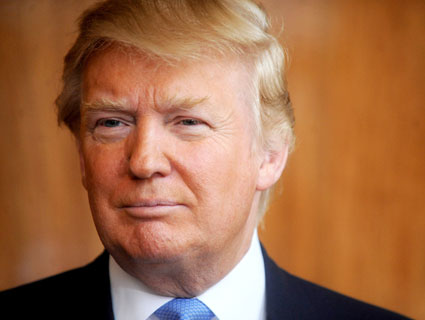 Donald Trump, the billionaire New York real estate magnate and presidential aspirant, is on a quest to court the hard-line social conservatives of the Republican Party. Recently, he has repeatedly questioned President Barack Obama’s citizenship, and has demanded to see Obama’s birth certificate. Interviewed by the Today show last week, he said he considers himself a tea partier. And after decades of supporting abortion rights, he has pronounced himself pro-life.

But Trump’s political makeover doesn’t end there. He has also changed his once-moderate stance on gay rights—a reversal that could spell trouble with the conservative base. Last month, Trump told the Des Moines Register that he opposes giving gay couples the same benefits as married ones, a position that’s in stark contrast to his past support for gay rights on everything from domestic partner benefits and civil unions to gays serving openly in the military. Asked about his position legalizing on gay marriage and giving “civil benefits” to gay couples, he replied, “No and no.” (A Trump spokesman did not respond to a request for comment.)

That’s a dramatic change to his past position on gay rights. In February 2000, Trump gave a long interview to The Advocate, a leading magazine covering the gay community. At the time, Trump was mulling a presidential run on the Reform Party ticket, the party founded by billionaire Ross Perot that counted former Minnesota governor Jesse Ventura among its members. In his response to The Advocate‘s questions, Trump laid out a decidedly progressive stance on gay rights issues for a Republican.

Trump told The Advocate he opposed legalizing gay marriage, but said he supported “a very strong domestic-partnership law” giving gay couples the same legal protections provided to heterosexual married couples. “I think it’s important for gay couples who are committed to each other to not be hassled when it comes to inheritance, insurance benefits, and other simple everyday rights.”

Trump said he cared more about a person’s capabilities than their sexuality, and insisted that “sexual orientation would be meaningless” if he were president, opening the door for gay employees in a hypothetical Trump administration. He told The Advocate he supported the idea of amending the 1964 Civil Rights Act to prohibit discrimination based on sexual orientation, and believed legislation to prevent hate-crimes was also necessary. “Amending the Civil Rights Act would grant the same protection to gay people that we give to other Americans—it’s only fair,” he said. Trump also said that he fully backed gays serving openly in the armed forces. “Don’t ask, don’t tell,” he added, “has clearly failed.”

Trump is expected to announce whether he’s running in June, coinciding with his headline speech at the Iowa Republican Party’s Lincoln Day dinner. If he does officially enter the race, could Trump’s past support for gay rights sink his presidential run?

Dave Peterson, a political science professor at Iowa State University, says Trump’s past position will seriously damage his campaign in the eyes of Iowa’s social conservatives, whose support can make or break the outcome of that state’s curtain-raising caucus. “Those kinds of social positions in the past are going to do him in,” says Peterson, who calls Trump’s presidential aspirations a publicity stunt.

Chris Barron, founder of the gay conservative group GOProud and a supporter of Trump’s would-be candidacy, says it’s too early to judge Trump on the issue of gay rights. He downplays the importance of Trump’s interview with the Des Moines Register.* Barron, who believes Trump is “dead serious” about running, pointed to the “gay people who work for him and gay people in his life” as evidence of Trump’s ties to the gay community. “I don’t think there is a bigoted bone in his body,” Barron says.

Barron says Trump’s climbing support in polls shows that his message is resonating with voters. As for how Iowa voters take to Trump’s past, Barron adds, “We’re going to have to watch and see how it plays out.”

Steffen Schmidt, an Iowa State political science professor who’s studied the caucuses for 40 years, says the fate of Trump’s candidacy is a no-brainer once Iowans learn of his past positions on issues including gay rights. “The moment at which Donald Trump’s campaign collapses is the moment the 18 or 20 other candidates bring up these views and chop him off at the knees,” Schmidt says. “I have no idea why he thinks he could launch his campaign in Iowa, but he’d probably be successful launching it in Las Vegas.”