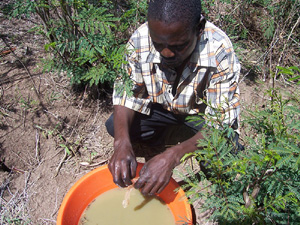 Rep. Chris Smith (R-NJ) may have taken his anti-abortion message to Kenya last week, but the policies Smith and other Republicans in Congress are pushing here at home are actually quite likely to increase the need for abortions there. The GOP budget included a 32 percent cut in funding for international reproductive health and family planning programs. It would also stop US contributions to the UN Population Fund, which provides family planning supplies and services.

Seeking to restrict abortion access while at the same time cutting funds for contraception, sex education, and other programs that help prevent unwanted pregnancies is nothing new for conservatives. But as I was writing on Smith’s trip to Kenya earlier this week, I came across this horrifying story about men in northern Kenya washing and recycling condoms. From IRIN:

Local TV channels recently showed images of men in Isiolo, in rural northern Kenya, washing condoms and hanging them out to dry; the men said the price of condoms meant they could not afford to use them just once. Other men in the village said when they had no access to condoms, they used polythene bags and even cloth rags when having sex.

What’s distressing about this story is not that the men are doing this; indeed, that shows that education campaigns are working. IRIN talks to one man, Hosea Motoro, who is HIV positive and who walks 3 miles to the nearest health center to get condoms so he can avoid infecting and impregnating his wife. Sometimes, though, the health center doesn’t have any to give him when he gets there. “When you go and you are lucky to get [condoms], you use, then you wash and use another time,” says Motoro.

So while Smith was in Kenya pushing an anti-abortion agenda, back in the states he and his allies are trying to defund the very programs that could help prevent people like Motoro and his wife from needing an abortion in the first place.

Also among the anti-abortion inclusions in the House-passed budget bill is the reinstatement of the global gag rule, a policy that bars organizations that receive government funding from offering abortion services or even discussing abortion as an option. The gag rule, also known as the Mexico City Policy, has been in place under executive orders issued by every Republican president since Ronald Reagan first instituted it in 1984. Both Bill Clinton and Barack Obama rescinded the rule as one of their first actions in office, but congressional Republicans now want to reinstate it through legislation.

The 1973 Helms amendment bans using foreign aid money to pay for abortion services. But the gag rule puts global health organizations in an even tougher spot: They can either offer abortion services and forgo federal funds, or they can take the money and not provide abortions. Since Obama repealed the order, international organizations that offer abortions can at least get funding for other vital services, like health care and family planning. But if House Republicans get their way, that will no longer be the case.