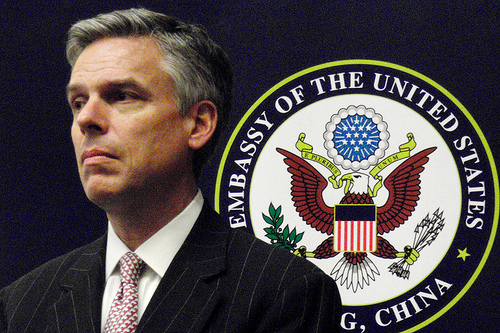 Jon Huntsman is gaining traction as the notably less-unelectable potential GOP presidential candidate. So far, he hasn’t said or done anything (ahem, Gingrich) that hurts his prospects. Unless, that is, you count his remarkably sane comments on climate change.

Time‘s recent profile of Huntsman, until recently the Obama adminstration’s ambassador to China, is most notable for all the policy areas that Huntsman declined to weigh in on (including Afghanistan, Libya, or any specific issue on which he differs from either Obama or his fellow Republicans). But in excerpts of the interview released this week the potential candidate does offer his thoughts on both climate change and the policies with which to address it. And while he now rejects cap and trade, he doesn’t dispute the underlying science:

This is an issue that ought to be answered by the scientific community; I’m not a meteorologist. All I know is 90 percent of the scientists say climate change is occurring. If 90 percent of the oncological community said something was causing cancer we’d listen to them. I respect science and the professionals behind the science so I tend to think it’s better left to the science community — though we can debate what that means for the energy and transportation sectors.

It’s a refreshing position coming from mainstream (if moderate) Republican, but does it go too far for his partymates? So it seems. The Competitive Enterprise Institute’s Chris Horner unleashed a storm of barely readable crazy at the American Spectator lambasting Huntsman’s statement. Writing at Commentary, Jonathan S. Tobin demand a Tim Pawlenty-style apology from Huntsman renouncing his climate views. (Lisa Hymas has more on the right-wing response over at Grist.)

Huntsman and Pawlenty aren’t the only GOP contenders with green skeletons in their closet. Romney has taken a similar position Huntsman, maintaining that climate change is happening but disavowing his previous support for measures to address it. Newt Gingrich, meanwhile, prefers to pretend that whole climate kumbaya moment on the couch with Nancy Pelosi never happened.

But Huntsman also has an additional problem. He doesn’t think that gay people are the scourge of the earth and perhaps may even be entitled to some basic rights, which could turn out to be a bigger headache for him than that whole climate thing.