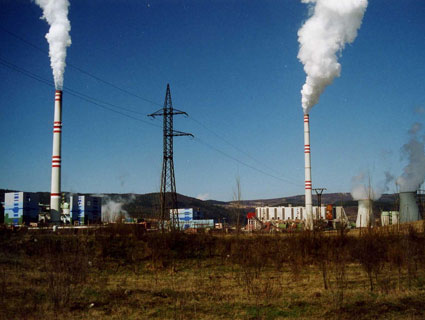 The Federated States of Micronesia (FSM), an island nation scattered across the Pacific north of New Guinea, has already had to confront the tides of climate change, which have eaten away at its coasts and left its food and water security in shambles. When leaders in FSM heard that the Czech Republic planned to extend the license on its biggest polluter, the Pruné?ov power station, they decided that a coal plant halfway across the world had everything to do with their fragile island country’s health. In January of 2010, FSM legally intervened in the extension of the plant by calling for a Transboundary Environmental Impact Assessment, which required the Czech government to take into account the environmental impact upon another territory when deciding whether to approve the project.

While it’s common for neighboring states to call for assessment impacts, FSM’s action marked the first time a transboundary country—a non-neighboring nation—attempted to intervene in a project. FSM, Greenpeace, and the Environmental Law Service presented the legal theory behind their precedent-setting move this week at the Threatened Island Nations Conference in New York in hopes of inspiring other nations to take a more proactive stance. (You can see the video stream of the conference here.) “Vulnerable nations have long been the moral voice on climate change, now they have a legal one too,” said Jasper Teulings, General Counsel at Greenpeace International. “Governments and corporations need to accept that it is indefensible to pursue dirty energy, when a clean and secure future powered by renewable energy is achievable now.”

FSM has good reason for concern. Most of its inhabitants live on coastal stretches, which currently contend with erosion and unusually massive tides that have been making it impossible to grow their staple crop, taro. According to a Center for Island Climate Adaptation and Policy report (PDF), after flooding from these tides swept through in 2007 and 2008, crops were destroyed on 60 percent of inhabited atolls. In late December, 2008, a nationwide state of emergency was announced and food security was declared the country’s top priority.

Unfortunately for FSM, the Czech government ended up approving the extension of the carbon-belching Pruné?ov plant in April. But FSM’s litigation did not fall on deaf ears; the Czech government welcomed the TEIA request, and awarded FSM the status of an “affected state” under Czech law. The Ministry of Environment also required CEZ—the state utility company in charge of Pruné?ov—to offset 5 million tons of CO2 in attempts to mitigate the environmental impact of the project. Most importantly, the FSM case may have paved the way for other countries to contest the effects of potential energy projects across the globe.

In a Mother Jones article about FSM’s litigation from last year, journalist Rachel Morris probed how environmental lawyers look for new ways to pressure large emitters to consider the countries they affect around the world. The pursuit is not without its thorns. As she wrote of one of the globe’s biggest polluters: “US judges have swatted down most climate lawsuits either by ruling that global warming is for Congress to address, or by finding that it would be unfair to hold a handful of companies responsible for damage caused by centuries of pollution across the world.”

But FSM’s action seems to indicate that smaller nations are gaining courage as their country’s situations become more dire. “How long can we continue to take the position that it is urgent and not do anything about it?” urged Stuart Beck, the Ambassador to Palau, a republic close to FSM, during Monday’s conference. Beck spoke of the importance of “testing the mettle of the international court of justice.”

“Sometimes you hit your head on a lamppost, and sometimes you make a little inroad,” suggested Antonio Oposa from the University of the Phillippines. “It’s time for us to do something.”