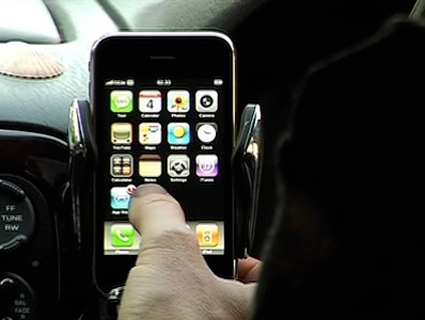 The prevalence of spyware in mobile technology and social networking sites has huge implications as a privacy issue, since users have no way of knowing who’s peeping, or for what purpose. New concerns over mobile and Internet privacy have been raised at the federal and state level, and there’s already push-back from some of the major players in the tech industry.

As Sen. Al Franken (D-MN) writes for Care2, recent studies indicate smart phones and other mobile apps are being used as remote spyware. Franken, one of the leading advocates for Net Neutrality and other media policy issues on Capitol Hill, notes that researchers found that “both iPhones and Android phones were automatically collecting certain location information from users’ phones and sending it back to Apple and Google—even when people weren’t using location applications.”

One particularly disturbing aspect of these revelations is that location information could be used by cyberstalkers. Franken notes he’s been contacted by battered women’s organizations on this issue, but as the senator states, there are “a range of harms that can come from privacy breaches.”

The widespread popularity of social networking has also resulted in widespread concerns over privacy. Yet, as Truthout’s Nadia Prupis reports, “Facebook, Google, Skype, and Twitter have joined forces to oppose an online privacy bill in California that would prevent the companies from displaying users’ personal information without explicit permission.”

The bill in question is SB 242, a.k.a. the Social Networking Privacy Act. Introduced by California State Senator Ellen Corbett (D), the bill would create stronger privacy guidelines, and also require social networking sites to remove personal information, if the user requests, within 48 hours. A failure to do so would result in a $10,000 fine per instance.

Facebook and other sites say such privacy protections could harm their business. But legislators weren’t so sure. California’s Senate Judiciary Committee, which passed the measure on May 16, called the threat to privacy “serious,” adding, “[It] is unclear how requiring that default settings be set to private would unduly restrict the free expression of users who elect to disseminate their information.”

Tweeting Back at Comcast

“Following Reel Grrls’ Twitter post,” Scheerer says, “a local Comcast vice-president immediately rescinded its annual $18,000 donation to the girls’ program. Comcast then apologized, calling it an action by an ‘unauthorized employee.’ By then, says Reel Grrls director Mallory Graham, the media had picked up the story and support came pouring in.”

The story goes on to note that non-profits like the Center For Media Justice (CMJ) helped to raise more than $14,000 for the program, allowing Reel Grrls to politely decline Comcast’s offer to restore the funding. The upshot of the whole episode: Reel Grrls’ will focus its summer program on free speech issues.

An Open Internet, Communities of Color, and Astroturf Orgs

Afro-Netizen recently picked up an op-ed by CMJ’s Malkia Cyril on digital diversity as it relates to Net Neutrality. Cyril writes:

In the fight over who will control the Internet, big companies like Verizon, AT&T, and Comcast are hoping they will win a pass on FCC oversight and public interest protection leaving them free to make as much profit as they can even if the service they provide is gated and discriminatory. Some civil rights groups are legitimately concerned that protecting the public from discrimination online -especially the poor and people of color- from the proven abuses of Big Media companies will result in those companies refusing to build out high speed broadband to rural communities and poor urban communities.

She goes on to express her concern over media advocacy organization the Minority Media and Telecommunication Council (MMTC), calling it an “Astroturf” outfit whose positions on the open Internet issue happen to coincide with those of the telecommunication companies, while appearing to champion increased minority broadband access.

As Cyril points out, there’s a perplexing disconnect there. “What doesn’t make sense is that groups like MMTC would deny that the financial relationship between them and the same media companies that are blackmailing the communities MMTC claims to represent, has an impact on their position on open Internet protections.”

Who You Callin’ a Slut?

On May 24, MSNBC talk-show host Ed Schultz referred to conservative radio personality Laura Ingraham as a “right-wing slut.” Though Schultz was publicly rebuked and quickly suspended by MSNBC after his remark, Yana Walton of the Women’s Media Center blogged that sexism isn’t OK, even when it’s directed at someone whose politics you don’t agree with. Though Walton says Schultz has historically been a supporter of women’s issues, she also notes:

In a media climate where Talkers Magazine’s “Heavy Hundred” list of the top talk radio hosts only included 12 women with their own programs, (plus two women co-hosts), such comments dissuade women from entering into political talk radio careers. Thus, such comments widen gender disparities in media even further and contribute to a climate where half of America’s voices and priorities are not heard.

Walton also praised MSNBC for their handling of the issue, saying the cable network’s “decision to place the issue of media sexism front and center was commendable, and today they set the example for other networks who are often guilty of media sexism, yet aren’t even beginning to address the problem.”

This post features links to the best independent, progressive reporting about media policy and media-related matters by members of The Media Consortium. It is free to reprint. To read more of the Wavelength, click here. You can also follow us on Twitter.