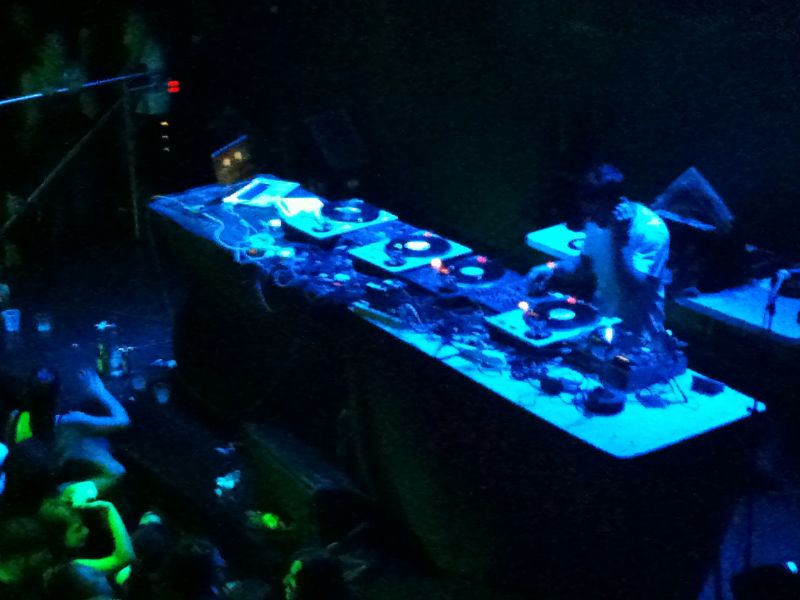 Somewhere between late Friday and early Saturday, an atrium overflowing with dedicated RJD2 fans waited out the last stretch of a long anticipation. They had driven in from out of town, endured brisk winds standing in line behind velvet ropes, and hurdled testy bouncers outside San Francisco’s 103 Harriet nightclub. Once inside, there was more waiting but much sensory stimuli to be occupied with, from the three fiery opening acts and accompanying laser-and-strobe-light shows, to the dance parties in adjacent rooms, three wet bars, and girls twirling around in glow-in-the-dark hula hoops. It seemed only fitting when a guy asked me if I had any cocaine.

By around 1:17 a.m. when RJD2 (finally) took the stage, the room was so packed that when I lifted my hand I wiped the sweat off a stranger’s forehead. After one last soundcheck fix and a hurried introduction, a murmured “Alright, here we go,” RJD2 jumped into the set. And with one scratch of a record he captured the focus of a few hundred loosely attentive people.

RJD2, né Ramble John Krohn, doesn’t oblige much by way of crowd interaction, but like a good bartender his precise hand movements say it all. The most mesmerizing part of his performance, besides his two hands simultaneously manipulating four turntables, two mixers, a beat sampler remote, and a laptop over 60 minutes, was the undivided and uninterrupted attention the crowd gave him from start to finish. When not bopping and waving to crowd pleasers like “Ghostwriter” and “A Beautiful Mine,” the familiar opening tune of Mad Men, all eyes were glued to RJD2’s fingers delicately dropping a turntable needle or swiftly contracting and extending against a record’s ribbed surface. Once in a while his hands broke into a solo, dancing over the 16 buttons on his Akai MPC (music production center) as though they were preprogrammed. Even when he turned around to dig out the next record in the set, all eyes fixated on his back.

And not a moment could be missed, since for some fans, the anticipation had been building for many hours, even years. One curious attendee told me he had first heard about RJD2 back in college, when friends raved about one of his on-campus shows. Only now was he here to see what all the fuss was about.