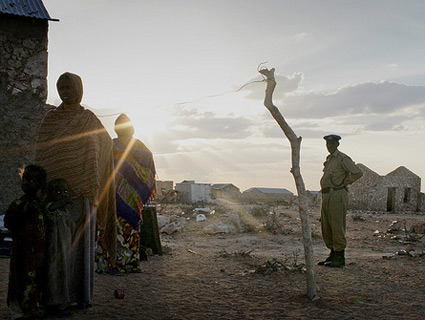 Should the United States coordinate with members of a known Al Qaeda-affiliated group in order to help ameliorate one of the world’s worst humanitarian catastrophes?

That’s the question the US government and other Western powers face, especially since the UN declared a famine in two southern regions of Somalia last week.

The worst drought the region has experienced in nearly 60 years has severely impacted several East African nations such as Ethiopia and Kenya, but Somalia—a failed state plagued by a decades-long civil war—is strapped with the toughest conditions, with millions in need of emergency aid.

The World Bank released this statement on Monday:

On the eve of the international emergency summit on the unfolding tragedy in the Horn of Africa, the World Bank today announced it is providing more than $500 million to assist drought victims, in addition to $12 million in immediate assistance to help those worst hit by the crisis…

“The recurring nature of drought and growing risk it poses to social and economic gains in this region calls not only for immediate relief from the current situation, but also for building long term drought resilience,” said Obiageli Ezekwesili, World Bank Vice President for the Africa Region.

But here’s where things get complicated: the afflicted regions of Somalia is largely controlled by the militant Islamist group Al-Shabaab, which is considered a terrorist organization by the US and other Western governments, and has been linked to Al Qaeda and deadly bombings in Uganda and elsewhere.

And even after the United States pledged nearly $30 million in emergency assistance to Somalia last Wednesday (though the pledge was contingent on assurances that American aid would not be delivered to anyone in Al-Shabaab-held areas, which includes roughly 60 percent of affected inhabitants), Al-Shabaab still continued to block aid groups trying to operate in southern and central Somalia.

These two factors represent an impossible impasse: The US Office of Foreign Assets Control and the post-9/11 Executive Order 13224 both restrict providing aid to key parts of Somalia, and Al-Shabaab generally views foreign donors as imperialist spies or “Christian crusaders,” anyway, and has installed a ban on assistance for the past two years.

Even with this two-way snag, those who advocate lifting the US restraints should not be so easily painted as naïve, soft-on-terrorism lefties. For example, in June 2008, the Bush administration shipped 37,000 tons of wheat to North Korea as its first step in expanded foreign aid. (The Obama administration has been reluctant to restart these installments of food shipments.)

The US helped deliver aid through the North Korean regime in spite of concerns similar to those regarding Al-Shabaab. Some officials were uneasy about whether they would be able to monitor the deliveries, and were afraid that the shipments would benefit the despotic rulers far more than the oppressed, malnourished citizens. Sadly, much of this turned out to be the case. But still, in the case of the humanitarian cataclysm in North Korea, the American government lent a hand.

Granted, this isn’t an apples-to-apples comparison. The Democratic People’s Republic of Korea is a member state of the UN, and the US does have some degree of open diplomatic back-channels to their state actors, while Al-Shabaab’s jihadist ideology and dedication to suicide-bomber tactics make it virtually non-negotiable. But directing aid to warlords and Muslim extremist entities isn’t exactly unprecedented, and because immediate action is required in drought-stricken areas, suspending our own aid restrictions might be the only option for preempting much greater suffering. EJ Hogendoorn and Ben Dalton of the International Crisis Group explained why in an op-ed for CNN on Tuesday:

It is true that armed groups were “taxing” humanitarian aid, but this is unavoidable in complex emergencies. Whatever marginal benefit Al-Shabaab derives from foreign aid, it is far outweighed by the goodwill and increased stability that aid generates. This is also an important way to show Somalis and the Muslim world at large that the West cares about more than waging a “War on Terror”.