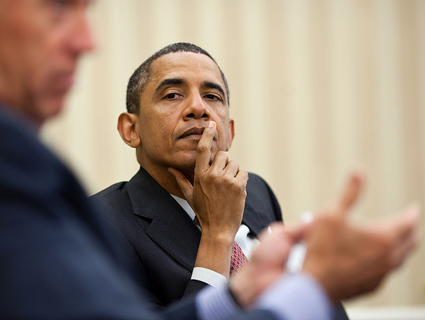 Yesterday’s fringe is the new mainstream, so it shouldn’t come as too much of a surprise that prominent Republicans are stepping up calls for President Obama to be impeached. Over what? They’re not entirely sure, but the details can come later. Rep. Michael Burgess (R-Texas) raised eyebrows last week when told a constituent it “needs to happen,” because “it would tie things up” (he has since backtracked). Sometime presidential candidate and former Speaker of the House Newt Gingrich suggested back in February that the President could be impeached for his decision not to enforce the Defense of Marriage Act.

And now, via Politico, here’s GOP presidential candidate and tea party favorite Herman Cain, musing that impeaching Obama would be a “great thing to do”:

[I]t would be a great thing to do but because the Senate is controlled by Democrats we would never be able to get the Senate first to take up that action, because they simply don’t care what the American public thinks. They would protect him and they wouldn’t even bring it up,” Cain said, citing the administration’s position on the Defense of Marriage Act as an impeachable offense.

Still, not everyone on the right is banging the impeachment drum. Here’s former Pennsylvania Sen. Rick Santorum, who is touting the momentum of his fourth-place finish in the Ames straw poll (third among candidates who are still running!), talking about impeachment in the context of Rick Perry’s rhetorical, um, flair:

[T]o me the rhetoric that Rick Perry used was sort of the rhetoric I would expect from a John Conyers, talking about President Bush and saying he should be impeached. We don’t do that. We don’t impeach people, we don’t charge people with treason because we disagree with them on public policy. You might say that they’re wrong, you might say lots of things about how misguided they are, but you don’t up the ante to that type of rhetoric.

Rick Santorum did vote to impeach someone once before, so maybe this jab is just part of his new effort to criticize everything Perry and Michele Bachmann do or say. But if there is a movement to impeach the president, there’s still a lot more work to be done. When I asked Rep. Louie Gohmert (R-Texas)—who recently stated that the Libyan intervention was a false flag operation to allow the implementation of Obamacare—about Burgess’ comments last week, he declined to comment. Rep. Steve King (R-Iowa), perhaps the president’s biggest critic in Congress, told me he didn’t think impeachment just for impeachment’s sake made much sense, and that there was nothing, at least at the moment, that would necessitate such proceedings.

That isn’t to say that things won’t pick up again should President Obama win reelection. But for now, Republicans looking to throw the president out of the Oval Office have a much simpler path: the ballot box.