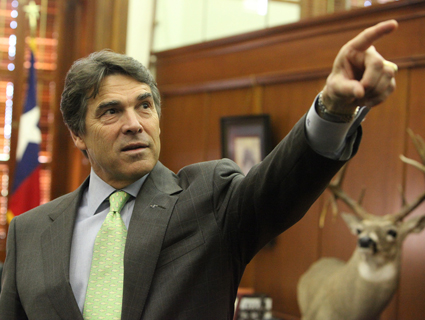 Yes, that's a stuffed buck in the background of this photo of Texas Gov. Rick Perry pointing at something.<a href="http://www.flickr.com/photos/scobleizer/3367455078/sizes/l/in/photostream/">Robert Scoble</a>/Flickr

The Values Voters Bus Tour kicked off with a good deal of hullabaloo on Tuesday with a rally in Des Moines starring Tim Pawlenty. But by the time the bus pulled up for at the central square in Atlantic, about an hour east of Omaha, it had petered out. Just 10 supporters showed up to hear Rep. Louie Gohmert (R-Texas) speak along with representatives of the tour’s sponsors—the Family Research Council, the Susan B. Anthony List, the Iowa Values Alliance Faith Family Freedom Fund, and the National Organization for Marriage. They were joined by 10 protesters (with signs like “if you cut off my reproductive choice, can I cut off yours?”) who heckled the speakers and challenged them on their opposition to gay marriage.

And, as has been a trend at events here in Iowa for the last week, there were five volunteers for a campaign that does not currently exist—that of Texas Gov. Rick Perry. Nate Crain, the national finance chairman for Americans for Rick Perry, has been driving around an otherwise unmarked white van plastered with homemade “Rick Perry 2012” signs, attempting to sell Iowans on the candidate with whom (per FEC rules) he is allowed no formal contact. At Atlantic, Crain bounded out of the van in a button-down shirt patterned on the Texas flag and introduced himself. “This is a grassroots effort, man,” he said. “Those guys, Bachmann, Pawlenty—those guys, they’re busing people in. This is all grassroots. I mean, look at our damn signs! The kids made ’em with markers in the hotel room.”

The kids, as he calls them, are his volunteers: Three female undergraduates from the University of Texas at Austin, all dressed in jogging shorts and identical burnt-orange, “Americans for Rick Perry” t-shirts. “People really love the shirts,” Crain says. They are, save for one protester, the only young people in attendance.

Perry has not made any appearance in Iowa this week, but his presence has been felt at every event I’ve attended. “I’m really up on Rick Perry,” said Thersa Wig of Des Moines when I asked her whom she’ll be voting for at the Iowa State Fair. “He held the prayer thing, and I did see him on TBN. I dunno, I’ve got to see more, but he looks presidential. I think his physical looks are important.” Wig voted for Fred Thompson in 2008, a candidate to whom Perry is (unfavorably) compared. Donna Oakley, a Missourian I spoke with a the Iowa State Fair, said much the same thing: “So far he looks the best. He’s ringin’ my bell. He just comes on strong to me on what my values are. I liked his record on the jobs in his state—and I like that he has God in his life.”

One of the big arguments against the Ames straw poll is that the race is just too unsettled for the event to mean much of anything: Candidates haven’t quite figured out how to connect, voters haven’t really started paying attention, donors are still looking for something more, and the field isn’t even set yet. Rarely has that problem been more pronounced than this year, with Perry scheduled to announce his candidacy today, some 1,500 miles away in South Carolina, right as the candidates are heading onstage at Hilton Coliseum to make their pitches to straw poll voters. That’s why today’s winner, whether it’s Michele Bachmann, Ron Paul, or Tim Pawlenty, won’t have much time to gloat; Perry’s about to hit the restart button on the whole thing.