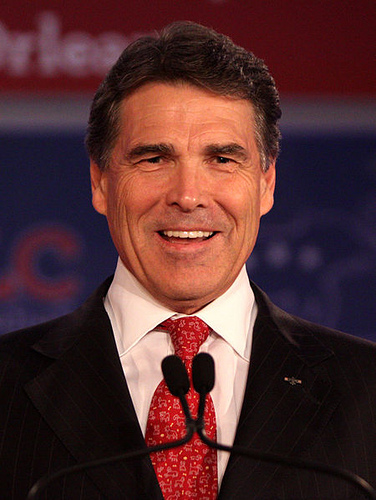 In a visit to New Hampshire earlier this month, Texas Gov. Rick Perry, now the frontrunner in the GOP presidential field, urged the Federal Reserve to open up its books to the public and “be transparent so that the people of the United States know what they are doing and how they are doing.” If only Perry would do the same for his decade as the governor of Texas.

Despite paying lip service to transparency and open government, Perry has gone out of his way to mask his activities in the Texas governor’s office. As the Houston Chronicle reported, Perry is unlikely to hand over the kind of information—travel and meeting records, schedules, donor contacts, and more—that George W. Bush provided, more than 3,000 pages in all, when he left the Texas governor’s mansion for the White House. “He has been governor longer than anyone in Texas history,” the Chronicle said, “but there is a lot the public does not know about Rick Perry.”

Perry and his administration have withheld information in 100 public-records requests during his time in Austin, and on occasion failed to respond on time to other records requests as required by state law. His administration has also refused to hand over notes and records about how the state’s two honeypots for economic growth, the Emerging Technology Fund and the Texas Enterprise Fund, decided to dole out grant money, including on one occasion to a company owned by a Perry donor. The Chronicle went so far as to sue the Perry administration for refusing to hand over notes on its decision not to grant clemency to Cameron Todd Willingham, a man who was executed in 2004 after being convicted of multiple murders on the basis of flawed arson pseudoscience.

Perry also closely guards records of his own travel as governor:

In contrast to Bush’s extensive appointments records, Perry has left the country without it being reflected on his public schedule. Reporters learned that he took a 2004 trip to the Bahamas with San Antonio businessman James Leininger, a Perry campaign donor, and anti-tax advocate Grover Norquist after being spotted scuba-diving by a tourist. The trip did not appear on his schedule released under the state Public Information Act. At the time, press secretary Kathy Walt acknowledged that Perry had begun releasing a far less complete report of his time after hiring a new scheduler. She also noted that “the Open Meetings Act and the Public Information Act have certain exemptions.”

Most of Perry’s travel is paid by campaign funds and detailed reports are not required to be disclosed. After the Bahamas trip, newspapers requested and got copies of the expenses paid for Perry’s Department of Public Safety security detail—and noted that the state picked up the tab for scuba equipment to accompany the governor. Since then, Perry has blocked public viewing of his security detail’s travel expense reports.

The Chronicle and the San Antonio Express-News have sued for the records. Two lower court rulings favored the newspapers, but the Texas Supreme Court in June agreed with Perry that his personal safety concerns were grounds for withholding the information.

Before that ruling was announced, proposed legislation keeping the governor’s travel security expenses private drew controversy in the Texas Legislature. The bill died in a Senate committee after lawmakers objected that the public should know if a state official misused a travel security detail.

Perry leaned on lawmakers to include language in a school finance bill passed in the Legislature’s special session that would keep secret for 18 months the travel vouchers of his security team. Until then, the public would be able to view only summary reports that disclose a trip’s destination, but not specific businesses visited or the names of family members accompanying the governor.

A Rick Perry presidency, it appears, could deal an even harsher blow to transparency and openness in federal government than seen under President George W. Bush and, to some extent, under President Obama. In March, Ellen Miller, the director of the Sunlight Foundation, a DC-based organization committed to more open government, blasted Obama’s record on transparency, saying his administration was “tremendously disappointing” in 2010 and that 2011 wasn’t looking any better. Transparency and openness, Miller worried, had tumbled far down the priority list for President Obama. For Rick Perry, it appears transparency was never particularly important from the start.