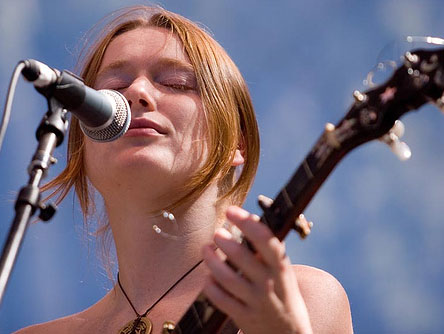 “That was one of the craziest shows we’ve ever played,” guffawed The Be Good Tanyas‘ Frazey Ford. Guitarist and lead vocalist Ford was referring to the band’s recent show at the Independent in San Francisco, part of a reunion tour by the otherwise defunct Canadian neo-folk trio. On stage, one of the ladies had let slip that the band had a dirty counterpart to every song. “I didn’t know it was going to turn into a riot,” added banjo/guitar player Trish Klein. “It was a fan riot. They were really, like, rabid.”

The group was commemorating Blue Horse, its first album—a collection of hobo anthems and playful reflections inspired by the members’ wanderlust and attraction to 1920s and 1930s American folk music. “It’s like a carry-forward of history,” explained Ford. “For me, it was my mom’s history. I think music is energy and it kind of reappears energetically in different generations almost like ghosts.”

Those ghosts left a haunted timbre on The Be Good Tanyas’ music, though fans have told Klein that the show has gained a new energy since the band split up three years ago. Ford is known for eerie vocals that traipse through the air with an exaggerated vibrato. Her lyrics are often indecipherable, but a lot of people at their sold-out show knew all the words. Klein’s guitar exuded the energy of a locomotive gaining speed—a bold complement to Sam Parton’s mandolin and whispery vocals, which softened the effect.

The set consisted of a few songs from the albums Chinatown and Hello, Love, but mostly songs from Blue Horse, an album tied together by themes of traveling and hope. The joined double-O on the cover she designed, Klien told me, is a Depression-era symbol hobos would leave one another to say, “Don’t give up hope.”

During our conversation, Ford and Klein were full of nostalgia for the band’s early years. Klein admitted they’d had no intention of making it big. “We didn’t have any idea there was any commercial viability for folk music,” she explained. Mostly, they just wanted to see “mythic America—places steeped in Steinbeck novels, historical narratives, Appalachia.” When they did so, they were taken aback: “There’s really down and out places, a lot of desperation and sadness, and an eroded landscape that is pretty barren.”

But the road trips weren’t all sociological reflection. Many hours were dedicated to the lewd lyrics that were nearly divulged at the San Francisco gig. When I tried my best to extract those words from Ford, she started laughing. “I’m sworn. I can’t. They’ll kill me,” she said. The dirty ditties were the product of hours and hours stuck in a tour van. “It’s kind of a tradition that someone would write a song and someone else would come up with a dirty version,” Ford said.

On stage, Ford had stepped to the mic all prepared to give the crowd a spicy alt-version of “The Littlest Birds.”

“Oh No!” Parton interrupted, finger thrust into the air. “Forbidden!”

The crowd stomped and shouted, begging to hear it.

Since I struck out with Ford, I thought maybe I could get a smutty lyric or two out of Klein, but she was an impermeable fortress: “No!” she said, and then continued to bait me. “It became a game at who could come up with the most gross lyrics. It would have to be in the same rhyme scheme with the same melody. It turned into this really vulgar pastime.”

An album of these nasty numbers, needless to say, is not forthcoming.

It’s hard to say, especially given the orneriness of their recent show, but perhaps they’ve been tempered by their present, more rooted lives. Klein stays busy hunting for chanterelles and scallops, cultivating her Japanese pottery skills, and composing botanical illustrations. She still records music, but besides some collaborations with folk band Po’ Girl, she mostly does it for her own listening. Ford is a mother now, and last year produced a jazzy-folk album titled Obadiah. Parton still writes and plays, but maintains a low profile, as she told an interviewer in June.

The band’s best-known song from Blue Horse, “The Littlest Birds,” predicted its members’ settling down all along…