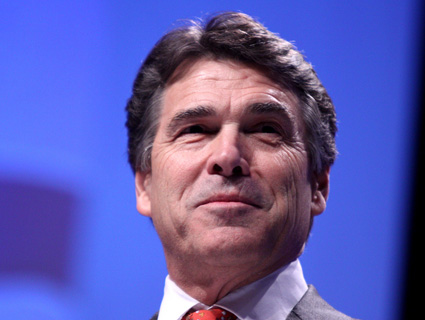 As demonstrated in last week’s GOP presidential debate, Gov. Rick Perry appears fully prepared to stick with his position that Social Security is nothing more than a “Ponzi Scheme” and a prime example of federal government “tyranny.” So sure is the Governor of his take on America’s most popular government program that you can’t help but ask the obvious question: Could Governor Perry be right?

The entire Ponzi Scheme argument was dispelled in a recent Venn diagram from MoJo’s Nick Baumann.

But the true centerpiece of Perry’s argument is that there currently exists no money in the Social Security trust fund. Zip. Nada.

Thus, the program is, in reality, already broke and only manages to stay afloat thanks to the government borrowing and printing more money to pay its Social Security obligations. Therefore, according to the Texas Governor, it is a lie and a scam when the government tells us there is lots of money in the trust to pay out Social Security benefits for many years into the future.

But, as is so often the case, being technically right can be hugely misleading.

If one were to imagine that there existed a large vault where the trillions of dollars that comprise the Social Security Trust Fund were stacked in neat rows, you might be surprised upon entering that vault to discover large stacks of IOU’s in the place of cash money or even bank depository slips.

Those IOU’s represent the loans made from the Social Security Trust Fund to the United States Government.

Accordingly, should Uncle Sam default on his debt obligations, Perry would not be overstating the case when suggesting that Social Security would, indeed, be busted.

Thus, if you’re looking for a good political pitch line, you can stop reading right here and press on with the right-wing meme that is the Perry Doctrine, safe in the knowledge that there is the possibility of truth in your argument.

However, if you are inclined toward a more reasonable assessment (shared the world over) that United States debt remains the safest place on Earth to put your money, you will find that while our Social Security program does have some funding issues coming up, they are nowhere near as severe as Governor Perry would have us believe.

According to the non-partisan Congressional Budget Office report, Social Security can continue to pay benefits at their current level—without experiencing any shortfall—through 2039. At that point, were we to have done nothing to address the issue, payments would be reduced by 20 percent to then eligible beneficiaries.

Taking an even longer view of the program, the CBO estimates the shortfall for the next 75 years would total about .6 percent of GDP.

Certainly, that figure reveals we are facing a long-term funding issue, but hardly an insurmountable crisis. Indeed, the problem can be remedied in a number of different ways without causing any pain to present beneficiaries and very little pain to those who will participate in the future.

Check out the potential solutions that the CBO has put forward as listed in this chart: 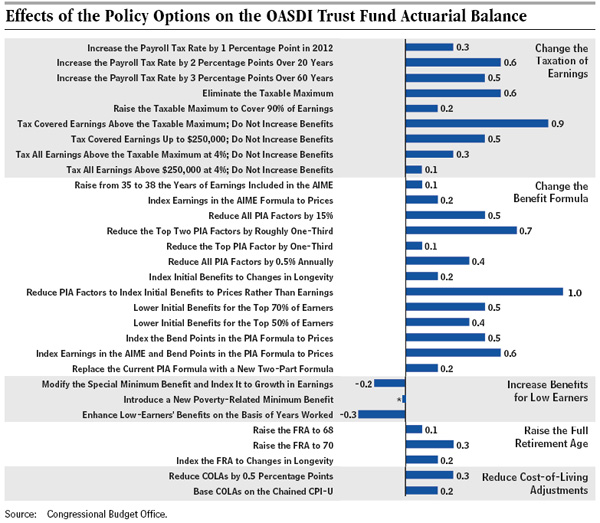 Interestingly, the one proposal you will not find on the list is privatization of Social Security.

While this approach tends to be popular among those with a more libertarian approach to life while making for a fabulous political talking point that suggests you can do better with your money that the government bureaucracy, you might be surprised to find that the idea sounds far better than it actually may be.

For starters, when politicians talk about shifting all that money to the private sector, all I can think about is how this would be the greatest influx of money to Wall Street in the history of banking—a benefit that the investment bankers’ lobbyists would gladly pay mega-dollars to political campaigns to achieve.

Forgive me for being suspicious but, come on, just look at the recent track record.

As you further think through privatization, ask yourself where you would want your money, were you to take over control from the government, to be invested. As you do so, imagine what would have happened to you had your broker been permitted to invest your retirement funds in derivatives or mortgage backed securities.

If you have a 401(k) plan, you likely already know what happens. If you do not, let’s just say that it isn’t pretty.

Thus, most rational Americans, the ones who understand that it is necessary to save for retirement and not take big risks with that money, would want their savings put in the very safest investment which remains…wait for it…United States backed debt instruments.

That is precisely where your Social Security money is right now!

The difference would be that while Wall Street will charge you a commission to buy your government bonds for your account, the Social Security Administration does not.

Now, some will still say that they want the right to do what they want with their own money. If they screw it up, it’s on them to figure out how to live in retirement.

If you lose your retirement savings, or fail to save at all, the rest of us will be on the hook to take care of you in your old age, whether by way of our tax contributions that pay for the Medicaid that covers your nursing home care, the food stamps that will feed you, etc.

So when you blow your retirement because you are convinced that investing your life savings in Mexican cantaloupe fields will surely make you a millionaire, it’s not going to be on you—it’s going to be on the rest of us.

The bottom line for those who are more interested in facts than they are in political hype, is that Social Security shortfalls do require resolution and it is well within our power to solve the puzzle.

What’s more, it is in every American’s best interest that we do so.