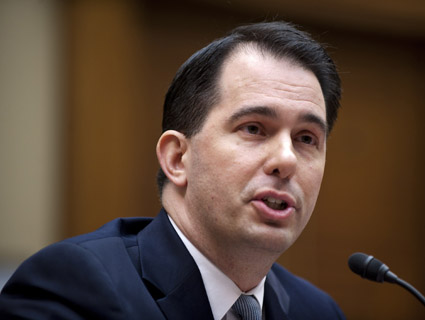 The fight to recall Wisconsin Gov. Scott Walker begins November 15, when the 60-day window opens for progressives, Democrats, and other Walker opponents to gather the more than half-million signatures they’ll need to trigger a recall election. Conveniently for Walker, a loophole in Wisconsin elections law opens up the same day and spans the same 60-day window. For that two-month period, the state’s $10,000 donation limit for individuals giving to gubernatorial candidates is out the window. That’s right: Walker can raise unlimited campaign cash for his recall defense as his opponents round up support to recall him.

Going on a 60-day money bonanza is at the heart of Walker’s recall defense strategy—at least that’s how Wisconsin GOP chairman Brad Courtney put it at a GOP event in Milwaukee last Friday. According to an audio clip provided to Mother Jones, Courtney says Walker stressed to him the importance of being able to rake in unlimited funds to run ads defending his record—especially his controversial budget repair bill. That, of course, was the legislation that kneecapped public-sector unions and sparked a month of protest, including an occupation of the state Capitol. “What Scott says is we’re gonna raise a lot of money—we can accept unlimited money for a 60-day time period, so you’re gonna see a lot of positive, wonderful ads about what’s going on in Wisconsin,” Courtney told the crowd. (A Walker spokesman didn’t respond to requests for comment. A Wisconsin GOP spokeswoman, Nicole Larson, declined to comment.)

Listen to the audio clip:

The wave of ads in a Walker recall election may not all be as positive as Courtney claims. Democratic, Republican, and third-party groups filled the airwaves with damaging, accusatory, and often incorrect ads during the Senate recalls, and there’s little to suggest a Walker recall would be any different.

As for the recall itself, Courtney predicted that anti-Walker organizers, a mix of grassroots groups and the state Democratic Party, would get the signatures they need to trigger an election. “Obviously, they’re going to start to recall the governor on November 15, and it’s my opinion they will get the signatures because the threshold is really low,” Courtney said. By law, recall organizers need more than 540,000 signatures, but those organizers say they plan to collect at least 700,000 to withstand legal challenges. Some, however, say they want to collect as many as a million signatures.

Courtney went on to urge the audience to reach out to friends, family, colleagues, and others in “your own spheres of influence” to convince them of the budget repair bill’s success. The GOP chairman’s defense of Walker’s policies, especially the budget repair bill, hewed closely to Walker’s own talking points, newly laid out on a just-launched website defending the governor’s record. “We have put Wisconsin on the right path,” Courtney said. “Hundreds of school districts across the state are saving money, they’re hiring more teachers, they’re lowering classroom sizes, and they actually have room for merit pay.”

Walker’s fundraising success in 2010 suggests he won’t have trouble filling his war chest for a potential recall race. He raised more than $10 million from individuals during his gubernatorial campaign. He also pulled in hundreds of thousands of dollars from the political action committees of Koch Industries, health insurer WellPoint, Walmart, and AT&T. The Republican Governors Association, a corporate-funded political juggernaut that helps elect GOP governors, spent $5 million on Walker’s behalf as well.

There is an effort underway to close Wisconsin’s recall fundraising loophole. On October 3, legislators in the Wisconsin state Assembly, the state legislature’s lower chamber, introduced a bill to close the loophole, but the bill hasn’t budged since being introduced almost a month ago.