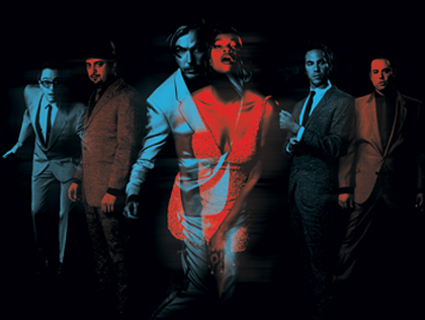 Nestled between the folk stylings of Justin Townes Earle and the bluegrass twang of the legendary Ralph Stanley at San Francisco’s Hardly Strictly Bluegrass Festival last month, soulsters Fitz and the Tantrums took to the Tower of Gold stage to transform the crowd into a hot, sweaty dance party.

Hailing from Los Angeles, the six-piece soul-pop band lays the Motown swagger on thick. But “we didn’t want to make our album Pickin’ Up the Pieces pastiche or revival, though some are quick to label us as that,” says singer Michael Fitzpatrick. “There are a lot of different influences pouring out, hip-hop, new wave, ABC, Talking Heads, and even with the Motown and Stax influences, it’s truly a hybrid of our music tastes and sensibilities.”

The fact that I can’t stop humming Average White Band’s “Pick Up the Pieces” while writing about them goes to show that good funk is all about the feel. “We’re high energy,” Fitz explains. “That’s where the tantrum comes in. We wanted it to sound like somebody just ratcheted the sound up to 11 and we’re careening off the tracks.”

Though they may want you to believe that, there’s nothing out of control or half-assed about it. Each studio track is a carefully crafted showcase of powerhouse vocals, twirled flutes, bombastic horns, and on-point percussion with plenty of snare filler for claps, howls, and vocal runs. The band is James Brown tight, minus the fines, and all are seasoned pros and sought-after studio musicians who have worked with the likes of Maroon 5, Madlib, Quantic, Dilated Peoples, Cee Lo, and Iggy Pop.

Pickin’ up the Pieces, their debut, gives the golden oldies of LA’s classic K-Earth 101 a swift kick in the pants. The album is full of car-radio singles like “Money Grabber,” the sing-along “Don’t Gotta Work It Out,” and “Pickin’ Up the Pieces of Love,” which will automatically get you head-bobbing and finger-snapping. “I grew up with a classical music and opera fascist for a father,” Fitzpatrick explains. “But I did have my car and then I could turn on the oldies station there. I instantly gravitated towards those songs—the melody, the backup harmonies you could sing along to it and become a part of the band.”

“Our intent from the very beginning has been to make the audience the seventh member of the show.”

He adds that this kind of dynamism, born from catchy verses and crystal clear composition, brings the audience closer to the band: “Our intent from the very beginning has been to make the audience the seventh member of the show,” Fitzpatrick says. “It just becomes this symbiotic relationship with the crowd.” Look no further than the big wave of standing patrons at Hardly Strictly when “Money Grabber” comes on live.

The album also features the one-two punch of Fitzpatrick’s and fellow singer Noelle Scaggs’ back-and-forth repoire. Swapping tales of love lost and philandering partners, the two have an electrifying stage presence that Fitz describes as a “will they or won’t they” relationship. “It’s a lot of ‘I love you, I hate you.’ You don’t know if we’re going to make out or fight, and it could go either way at the moment. Obviously the songs are about heartbreak and they just lend themselves to this male-female dynamic.”

But when I bring up Occupy Wall Street, the singer has a musical take: “‘Money Grabber’ was written as a bitter experience of being with somebody and finding they have ulterior motives,” he says. “But as soon as the song spread, it took on its own meaning in the post-Bernie Maddoff world. And with “Dear Mr. President,” I was trying to come up with that last magic track, and this was right when the economic crisis was happening, when the whole thing crashed. I watched my dad lose half of his retirement in one day—it’s a very real thing for everyone. We decided to write a love letter to our president, to say, ‘Do better.'”

When I ask Fitzpatrick if the band would consider playing an impromptu show the New York occupation, he says he’d definitely be down, although “I think we’d get shut down in about 3.2 seconds.”