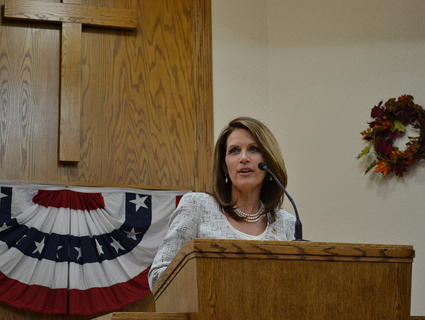 Michele Bachmann (remember her?) is flailing desperately in her bid to become the first sitting member of the House to win a presidential election since James A. Garfield. There’s a pretty big incentive for her to stay in the race at least through the holidays: She has a book coming out in November. But there’s also a pretty strong disincentive for her to stay in the race much longer than that—in February May her biggest career donor goes on trial in federal court for fraud, and there’s the potential for some pretty incriminating details to trickle out.

Over at The New Republic, Mariah Blake has an excellent piece on a Bachmann story that hasn’t gotten quite the attention it deserves. Partly that’s because it’s tougher to explain in one snappy phrase (i.e. “pray away the gay!”), and partly because it speaks to systematic problems that aren’t unique to the congresswoman. Following up on reporting by Karl Bremer at Ripple in Stillwater, Blake explains how Frank Vennes and his partner, convicted Ponzi schemer Tom Petters, made millions on phony investments and then poured hundreds of thousands of dollars into political campaigns in the 2000s. Vennes’ donations seemed to have a clear motive: receiving a presidential pardon for a prior felony conviction.

Many Minnesota politicians, Democrats and Republicans, received a lot of money from Ponzi schemers Tom Petters and Frank Vennes. But Bachmann was one of the few to take tangible actions in response. During her first Congressional campaign in 2006, Vennes and his associates donated $50,000 to Bachmann’s campaign and PAC. Bachmann, in turn, lobbied the White House to reconsider Vennes’ pardon application. Vennes and his wife then donated another $11,200. Blake writes:

According to a former Bush administration official who was privy to the negotiations, around this time both Bachmann and Pawlenty also began lobbying the White House on Vennes’s behalf (an allegation Pawlenty denies). This apparently helped set some gears in motion. In early June 2008, the White House asked the OPA to take a second look at Vennes’s application, after which it began vetting the case anew. On June 30, Vennes, his wife, and his lawyer dumped another $11,200 into Bachmann’s campaign coffers. According to the Bush administration official, Vennes’s pardon application was sent to the White House with a recommendation for approval, where it remained, presumably awaiting end-of-term signature by President Bush.

There’s no reason to think that Bachmann knew Vennes was raising money for a Ponzi scheme. The question is why she chose to take up his cause. House ethics rules state that, while members can alert agency officials if they have “personal knowledge” about such situations, as a general rule they “should not devote official resources to casework for individuals who live outside the district”—as Vennes did.

After Vennes was formally accused of fraud, Bachmann told the White House she’d had second thoughts about the whole thing. It’s a tribute to the absolutely crazy nature of her candidacy and her propensity for saying something entirely new and off-the-wall things every week that Bachmann has never really had to answer questions about why she lobbied for an (alleged!) Ponzi schemer. She may never have to—Vennes goes on trial in February May, by which point there’s a good chance the Minnesota congresswoman will be out of money and out of the race entirely.