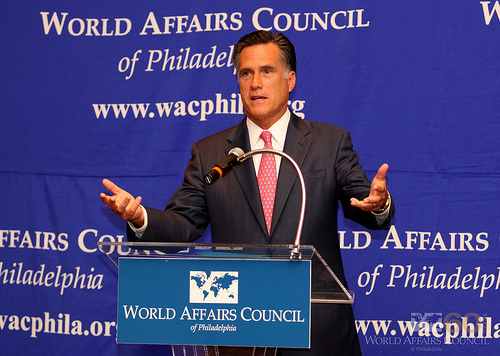 Perched awkwardly on chairs in the back of a Miami warehouse, Fox News’ Bret Baier and Mitt Romney met on Tuesday for a lengthy televised interview. It was a rare moment of exposure for a candidate happy to keep the media at arm’s length, but Baier didn’t go easy on the GOP presidential front-runner. He wasted no time highlighting the former Massachusetts governor’s wishy-washy record on an array of issues and asking Romney whether he believes voters can trust him given his flip-flopping.

Romney’s reply, boiled to its essence: Forget what I’ve said; just read my book. He was referring to No Apology: The Case for American Greatness, published in 2010, in which he outlined his vision for restoring the US’ stature as world superpower.

During the Fox interview, Romney deflected questions about his flip-flopping three times by pointing to No Apologies—which, as it turns out, had integrity issues of its own. (More on that later.)

Here are some excerpts from the Fox interview (emphasis mine):

Bret Baier: What is your reaction to [the New Hampshire Union Leader‘s] endorsement [of Newt Gingrich], and specifically that charge that you lack conviction?

Mitt Romney: And with regards to my own views, I’m happy to have people take a look at my book. I wrote that a couple of years ago, laid out my views for the country, and I believe my views are essential to get this country going again.

BB: Like the Union Leader, your critics charge that you make decisions based on political expediency, and not core conviction. You have been on both sides of some issues, and there’s videotape of you going back years speaking about different issues—climate change, abortion, immigration, gay rights. How can voters trust what they hear from you today is what you will believe if you win the White House?

MR: Well, Bret, your list is just not accurate. One, we’re going to have to be better informed about my views on issues. My view is, you can look at what I’ve written in my book, you can look at a person who has devoted his life to his family, to his faith, to his country, and I’m running for president because of the things I believe I think I can do to help this country.

BB: But I’m sure you’ve seen these ads using videotape of you in previous years speaking on various issues. And it seems like it’s in direct contrast to positions you take now.

MR: Well, I’m glad the Democratic ads are breaking through and you guys at Fox are seeing them—

BB: Jon Huntsman has a couple ads that do the exact same thing.

MR: There’s no question the people are going to take snippets and take things out of context and try and show that there are differences where in some cases there are not. But one place where I changed my mind: with regard to the government’s role in relating to abortion. I am pro life. I did not take that position years ago. And that’s the same change that occurred with Ronald Reagan, with George W. Bush, with some of the leaders of the pro life movement.

[Later, Baier asks Romney about the mandate signed into law by Romney that everyone in Massachusetts buy health insurance, and whether Romney believes Massachusetts’ model would work on a national level.]

BB: But, governor, you did say on camera and in other places that at times you thought it would be a model for the nation.

MR: No. The tape out there—continue to read the tape. The tape goes on to say, for each state to be able to look at it. I was asked time and again, in the last debates…look back at the 2008 campaign. On the stage, I was asked at the debate, ‘Is your Massachusetts plan something you would have the nation do as a federal plan?’ Each time said, ‘No, the answer is no.”

When you write a book, you have the ability to put down your entire view. And I put in that book as clearly as I possibly could that the plan we did in Massachusetts had many features that I thought should be adopted by the other states. I thought there were very good ideas in there. There could be a model for the entire states.

Baier’s right: Romney’s shifting positions on major issues are well-documented. He’s flip-flopped on humans’ role in causing climate change, foreclosure relief, privatizing social security, a flat tax, whether President Obama made the recession worse, gay rights, and on flip-flopping itself, among others.

And in No Apologies, between the hardcover and paperback editions, Romney edited a passage on the universal health-care plan he signed into law in Massachusetts. As PolitiFact noted, after trumpeting the success of Massachusetts’ health-insurance reform, Romney wrote in the No Apologies hardcover edition, “We can accomplish the same thing for everyone in the country, and it can be done without letting government take over health care.” But in the paperback, that line was changed to read, “And it was done without government taking over health care.” Romney didn’t write that Massachusetts’ plan should be national policy, but as PolitiFact concluded, “a line that advocated the Massachusetts model as a strong option for other states was replaced by a shorter, more generic sentence.”

Even Romney’s book, his fallback when his integrity comes under attack, has shifted over time. So much for that defense.