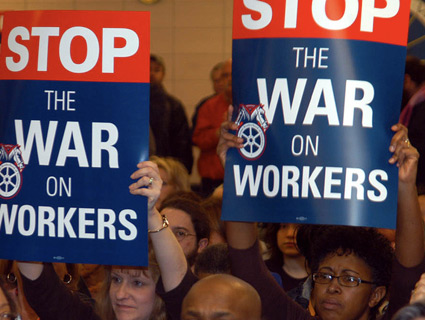 It is D-Day for Gov. John Kasich’s anti-union law. Ohioans go to the polls today in one of the most anticipated off-year elections to decide Issue 2, a referendum on whether to repeal Kasich’s law that curtails collective-bargaining rights for public-sector workers. Voters will also approve or reject Issue 3, a misguided constitutional amendment intended to exempt Ohioans from a federal health insurance mandate. Unions, businesses, trade groups, and out-of-state political outfits have spent more than $30 million to sway the vote on both measures. Polls show Issue 2 losing by double digits and Issue 3 passing by a modest margin.

Beyond those parochial controversies, a question looms: How will these fights impact the 2012 election? President Obama scored a crucial victory in Ohio in 2008, edging out Republican John McCain by 4 percentage points. But with Ohio’s economy stuck in the doldrums, one of Obama’s biggest challenges next year is clinching another win in a swing state where now only 44 percent approve of his performance. That number sinks to 34 percent among coveted independent voters. Would a defeat of the anti-union law known as SB 5 buoy Obama in Ohio? Would a win for Kasich and his allies undercut a key component of Obama’s base—the unions—and in effect defund the Democratic Party?

Issue 2 and, to a lesser extent, Issue 3 have voters fired up. That’s especially true among labor unions, which view Kasich’s law as a direct threat to their existence. This summer, We Are Ohio, the union-funded organization that led the “No on Issue 2” campaign, collected nearly 1.3 million signatures from all 88 counties in Ohio to put an SB 5 repeal vote on the ballot. The group signed up more than 17,000 volunteers and has operated 35 field offices throughout the state, according to spokeswoman Melissa Fazekas. (Building a Better Ohio, the flagship pro-SB 5 group, claims it enlisted “several thousand” volunteers and opened 16 volunteer call centers statewide.)

Because Issue 2 has mobilized labor unions in a massive way, it could provide a major boost for Obama and the Democrats in Ohio next year, says John Green, the director of the University of Akron’s Bliss Institute of Applied Politics. “Senate Bill 5/Issue 2 stimulated a tremendous amount of energy, and a lot of that energy is directly transferrable to next year’s [presidential] campaign and senate elections.” Even if Kasich’s law ultimately survives, Green adds, unions will still carry into 2012 an energized base and organization for getting out the vote next November.

An enthusiasm boost is exactly what Ohio Democrats need, after losing the governor’s race and a spate of legislative elections in 2010, says Larry Sabato, director of the University of Virginia’s Center for Politics. Last year’s elections demoralized Democrats around the country, and any encouragement taken from a Democrat’s win in a special election for an open House seat in upstate New York in May was wiped out when a Republican replaced disgraced Congressman Anthony Weiner in New York City. Sabato notes that a labor victory on Tuesday will give unions the booster shot they needed.

“Enthusiasm matters most in politics,” he explains. “We always underestimate enthusiasm because you can’t turn it into data, but it’s real in another sense. Labor organized the state well, got public opinion on its side, and that gives it a solid launching point in a presidential election year.”

That said, if pro-SB 5 outfits including Building a Better Ohio somehow pull off an upset win, Obama will face greater challenges in the toss-up state. Kasich’s SB 5 law not only curbs collective-bargaining rights for 350,000 public workers; it undercuts the political clout of organized labor. Its provisions would lead to smaller unions with fewer financial resources, and the measure would block automatic payroll deductions for a union’s political action committee. Post-SB 5 unions would be less able to assist Obama in what promises to be a tough campaign in Ohio.

If Issue 2 fails, Green says, Republicans could reintroduce parts of Kasich’s bill as an “SB 5 lite.” Such an effort would likely focus on SB 5’s noncontroversial pieces, not the bargaining ban or the provisions that weaken union power. But if GOPers continue their attack on unions, they’ll rile up workers, progressives, Democrats, and everyone else who believe Kasich and Co. have badly overreached. “If it fails and then the legislature decides to reenact parts of it,” Green says, “we’ll again see how powerful this issue is at mobilizing union people.”