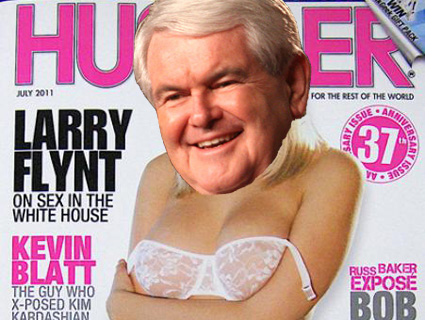 The Communications Decency Act of 1996 is not a subject that Newt Gingrich likes to talk about on the campaign trail. For the new GOP front-runner, the episode also marks a notable exception to his record as a social conservative: the time when Gingrich took on his own base to keep the web open for pornography. Here’s how it happened.

With a few exceptions, the web was something of a foreign concept to Congress in 1995. (Gingrich, the lower chamber’s biggest web booster, didn’t even use email.) But the internet was quickly earning a reputation, especially on the right, as a den of immorality, awash in smut and sexual predators. Congressional leaders decided they needed the Communications Decency Act, which was folded into a must-pass Telecommunications bill.

Sen. Jim Exon compiled an album of images he’d found on the web—including one of a man engaging in intercourse with a German shepherd—and invited his colleagues to take a look.

“Barbarian pornographers are at the gate and they are using the internet to gain access to the youth of America,” warned Sen. Jim Exon (D-Neb.).

To fend off the barbarians, Exon introduced an amendment to the Communications Decency Act criminalizing the transmission of “indecent” materials over the internet. In case any stone remained unturned, it went after internet service providers as well: Email or distribute nude photos—or even just type one of the “seven words you can’t say on television”—and you could face a $100,000 fine or up to two years in prison.

Exon’s measure passed the Senate with 86 votes. The appeal was clear: No elected official wanted to be seen as voting for smut. The Contract With America—Republicans’ promise to voters in advance of their landslide win in the 1994 elections—had even contained a provision vowing to crack down on child pornography.

That’s where Gingrich came in.

To the House speaker, the debate presented a clash between his desire to prepare America for the 21st century and his conservative values. Gingrich, by his own description, was a “conservative futurist.” He envisioned honeymoons in space and laptops in every classroom; the Exon amendment, by casting such a wide net, threatened that future. 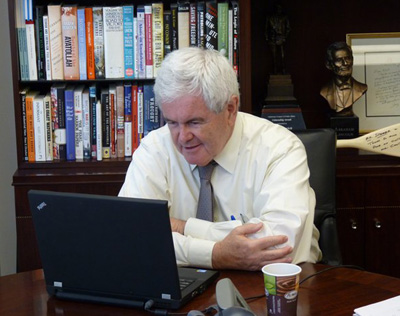 Newt’s preferred web-surfing policy: Don’t ask, don’t tell. Newt Gingrich/FacebookGingrich was right that Exon’s bill was extremely broad. As Sen. Patrick Leahy (D-Vt.) pointed out in a particularly inspired floor speech, the law could even have criminalized the online distribution of Gingrich’s first novel, 1945, in which a “pouting sex kitten”—who is also a Nazi—seduces a White House aide in order to extract classified information. It would also have prohibited most non-Will Smith forms of hip-hop.

“[The amendment] is clearly a violation of free speech and it’s a violation of the right of adults to communicate with each other,” Gingrich said at the time. “I don’t agree with it…” In an interview with British journalist David Frost, he elaborated on his position. “I think there you have a perfect right on a noncensorship basis to intervene decisively against somebody who would prey upon children. And that I would support very intensely. It’s very different than trying to censor willing adults.”

Although the Senate’s version was part of the law that eventually passed, it was overturned by the Supreme Court the next year in Reno v. ACLU. What remained was Gingrich’s language, a piece of legislation sufficiently ahead of its time that Jerry Berman, founder of the Center for Democracy and Technology, says it should be called the “Communications Democracy Act.”

It also wasn’t the last time that Gingrich stood up for the internet’s biggest business: In 2009, his organization, American Solutions for Winning the Future, briefly named adult-film titan Pink Visual the “entrepreneur of the year” and invited the company’s CEO to a reception at DC’s Capitol Hill Club. Gingrich’s spokesman said at the time that Pink Visual had been honored “inadvertently.”

The speaker may have been an ally in the fight against the Exon amendment, but that hardly makes him a free speech icon. Gingrich “talked out both sides of his mouth,” says Hustler magazine publisher Larry Flynt. The free-speech activist (who currently has a $1 million reward for dirt on Rick Perry’s sex life) took on Gingrich at length in his book Sex, Lies, & Politics and hasn’t changed his views in the ensuing decade. “I wouldn’t vote for him for dogcatcher.”