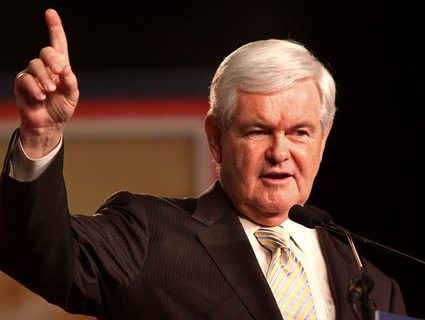 As I’m walking to Newt Gingrich’s meet-and-greet at a hunting ranch in Walterboro, South Carolina, a middle-aged woman explains to me why she’s going to vote for the former speaker of the House on Saturday. It’s quite simple, really: “Newt’s salt of the earth.” Salt of the earth is actually something Newt Gingrich has never been accused of being. He likes to name-drop existential writers and Enlightenment philosophers and conservative economists from the 1980s; he doesn’t hunt; he doesn’t farm; he doesn’t get his hands dirty, except to dig up dinosaur bones in Montana.

So how does Gingrich appeal to an interest group he shouldn’t, at least culturally, have anything in common with? By picking fights with their shared enemy. Before launching into his brief stump speech, Gingrich uses the occasion of speaking to sportsmen (many of them dressed in their finest camo threads) to blast “intellectual left-wing environmentalists” for believing that “humans are not part of the world.” As attendees munched on barbecue and coleslaw and sipped sweet tea, Gingrich told them who they should resent, and why:

I want to make one point that I think liberals don’t ever get. And I always sort of reference it when we’re talking about rivers and the low-country. People who hunt and fish are among our most passionate conservationists because they’re actually out in the woods and on the trails and in the streams and in the swamps. And they understand that if we don’t keep areas that are healthy, there is no hunting and fishing. And so the big difference is this: the intellectual, left-wing environmentalists have a theoretical model in which humans are not part of the world.

This is very different from what Theodore Roosevelt and others began at the turn of the last century, when they wanted a conservation that was multiple-use and they wanted natural areas, but they understood they wanted natural areas so that people could join them. We’ve had a tremendous decline for example in forestry. And the result is our trees are sicker today, we lose more trees to fire today, Because we have more beetle infestation, because environmentalists don’t understand nature. They have this idealized model that doesn’t reflect the world. It’s a little bit like the Disney cartoon model of Africa where the elephants and the zebras and the lions all hang out together. Now any of you who know about the real world know that if the lions and zebras hang out together after a while, there are fewer zebras and happier lions.

This gets a lot of laughs, but one thing is missing from Gingrich’s rant: science. In the real world, of course, the biggest threat facing American ecosystems and endangered species isn’t Agenda 21 or a lack of qualified forestry experts; it’s climate change. But for Gingrich, who once joined Nancy Pelosi to urge Americans to take action on climate change, that would be an impossible argument to make. Gingrich’s characterization of environmentalists favoring a world without people may also have a darker meaning. Many conservatives fear that under a UN program called Agenda 21, vast swaths of land, such as eastern Montana, will be cleared of humans entirely. Gingrich has himself mentioned Agenda 21 on the campaign trail.

More so than Romney, Santorum, or Paul, Gingrich sells himself to voters by putting the “bully” in bully pulpit. His stump speech consists largely of giving his audience the illusion that the problem with the current president is that he has substandard intelligence (Gingrich’s most reliable laugh line is the concession that he’d let President Obama use a teleprompter in their never-gonna-happen Lincoln-Douglas debates). In Easley on Wednesday, he explained that the administration’s decision to block the construction of the Keystone XL pipeline was “stupid” (a line he repeats in Walterboro). “It’s one thing to say that a White House doesn’t understand chess,” he says. “It’s another to say they can’t understand checkers. But if they can’t play tic-tac-toe…” Well, you get the picture.

That anger, and his ability to channel the same in others, explains why Gingrich’s performance at Monday’s debate—when he dismissed Fox News’ Juan Williams’ suggestion that he was playing to racial stereotypes by denigrating food stamps—has resonated so deeply. “I am so tired, personally, of racial prejudice,” says Tommie Derry of Walterboro, a Gingrich supporter. “The way blacks are handling it, if you weren’t racially prejudiced, it’d make you racially prejudiced” Gingrich’s retort to Williams went beyond a simple debating coup; it was cathartic. “When I hear the Juans of the world, I get upset.” Her son, Mark, doesn’t go quite so far, but when I ask him how long he’s been on Team Newt, he doesn’t even have to think about it: “Since Monday.”