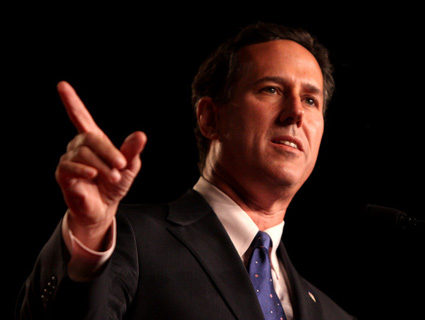 On Tuesday, after 13 debates, five different front-runners, and one unforgettable Gloria Allred press conference, the GOP presidential race will finally take its first, tentative steps toward clarity when upwards of 100,000 Iowans participate in the first-in-the-nation caucuses. A win on Tuesday isn’t exactly a ticket to the White House—no Republican caucus victor has gone on to win the presidency in the modern era—but a poor performance will almost certainly mark the end of the road for candidates like Rep. Michele Bachmann and former Sen. Rick Santorum.

Here’s how it works: As in any election, each voter is assigned to a precinct. A city like Waterloo would have multiple precincts; a flyspeck town in northwest Iowa might have just one (there are 1,774 in all). To participate, you show up at 7 p.m. and, after listening to speeches from fellow precinct members on behalf of their favored candidates, cast your ballot. Often, the speakers are respected community leaders whose words carry some weight; revered former Iowa State wrestling coach Jim Gibbons, for instance, told me he might speak on behalf of Santorum at his precinct. Democratic caucuses usually entail multiple ballots, but Republicans will vote just once.

So what should you watch for? Here’s a quick look at where the candidates stand, and how they’ve spent their final week before the big vote:

Rick Santorum‘s final pitch to Iowa voters on Monday centered, as you would expect, on social issues. In Polk City, a farming community north of Des Moines, he was joined by 13 of the 21 Duggars—stars of the TLC reality show 19 Kids and Counting, and celebrities among conservative home-schoolers. It was folks like the Duggars who pushed Mike Huckabee over the top in 2008. By the numbers: Number of Iowa counties visited, out of 99: 99; number of Pizza Ranch franchises visited: 33; number of sleeves on his sweater of choice: 0; number of members of his immediate family, out of 9, who do not belong to the National Rifle Association: 1; percentage of supporters who say they will definitely show up for their caucus: 76.

As my colleague Gavin Aronsen reports, Ron Paul’s path to victory depends heavily on an army of college activists who flew into the Hawkeye State for winter break. Over the last few weeks, GOP opponents have hit him hard for publishing a racist and anti-Semitic newsletter in the late ’80s and early ’90s, but he’s managed to climb toward the top of the polls and has saturated the airwaves with flashy ads touting his pro-life credentials and Chevy-truck-style consistency. By the numbers: Number of babies delivered, according to his campaign literature: ~4,000; number of volunteers his campaign paid to house at the YMCA camp in Boone: ~500; percent decrease in favorability ratings over the final week of the campaign, according to Public Polling Polling: 21.

After her triumph at the Ames Straw Poll in August, Michele Bachmann looked like a serious contender for the Republican nomination, but her campaign has since fallen apart. Bachmann’s top Iowa aide switched his support to Ron Paul late last week in a move that underscored just how dysfunctional her organization in the state was. She says she’s in the race for the long haul, but barring a miracle, she’s pretty much done. By the numbers: Percentage of Iowa Republicans who said they’d caucus for her on July 10: 25; percentage of Iowa Republicans who said the same on January 1: 7; salary paid to former top strategist Ed Rollins, who now says he never would have worked for her if had just Googled her: $90,000.

Rick Perry entered the race in August as a cocky, angry, anti-Obama candidate, but in the last week before the caucuses he’s resorted to taking shots—and cutting Jeopardy!-style radio ads—blasting Rick Santorum for helping secure funding for a teapot museum in North Carolina. He’s also more or less abandoned his original pitch as an economic miracle worker, and refocused his campaign around cracking down on gay and reproductive rights. Oh, and he still thinks gay sex should be illegal. By the numbers: Number of YouTube “dislikes” for his web ad, “Strong,” which lamented the end of Don’t Ask, Don’t Tell: 731,755; number of likes: 24,813; points fallen in the polls in Iowa since August 21: 41.

For a moment—a brief, eminently fascinating moment—Newt Gingrich looked like he might be the next Republican nominee. But after being swamped by negative ads from Ron Paul and a pro-Romney super-PAC, Gingrich has fallen back to earth hard. In Atlantic, Iowa, he was put on the defensive by his own supporters, who were concerned about his past support for global warming legislation, and his quasi-lobbying work for Freddie Mac (among other things). Gingrich is hoping outrage over a nonexistent EPA dust-regulation campaign will translate into support at the caucuses. By the numbers: Percentage points dropped from mid-December high-water mark: 20; number of days in between the launch of his campaign and the opening of a campaign office in Iowa: 183; date on which he told ABC’s Jake Tapper “I’m going to be the nominee”: January December 1.

And then there’s Mitt Romney, who stands to all but lock up the Republican nomination with a win tonight. He’d be in pretty good shape with a loss, too, provided he at least outperforms a couple of key rivals. After initially keeping his distance from Iowa, the former Massachusetts governor poured considerable resources into the state over the last month of the race and plans to spend Tuesday night in Des Moines—a sign he expects to do well. As one Romney aide told Politico’s Roger Simon, “Iowa is about eliminating Gingrich and Perry without us having to spend a lot of money to do so.” By the numbers: Number of different Republican rivals he has trailed in the polls in Iowa at some point or another: 5; amount, in millions, spent by his super-PAC on ads targeting Newt Gingrich: $3.5; number of staffers it takes to hold his chair in place; 1; number of chemicals it takes to hold his hair in place: 0; percentage of Iowa voters who said they’d vote for him on July 11: 18; percent who said they’d vote for him on January 1: 18.

How to watch: Check this space, and Twitter, for updates. Gavin Aronsen (@garonsen) and I (@timothypmurphy) will be reporting from Iowa all day. By 10 p.m., we should have some idea of how the night will turn out.