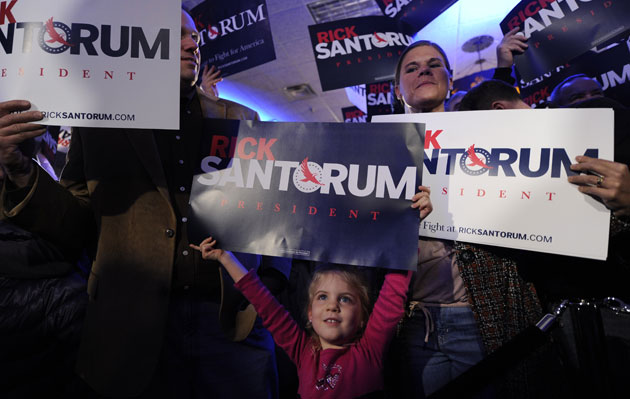 Supporters hold up placards during Santorum’s caucus night event in Johnston, Iowa. Zhang Jun/Xinhua/ZumaOkay, it’s time to take Rick Santorum seriously. Not because Iowa is particularly decisive—it’s not, as Mike Huckabee can attest—but because New Hampshire is. And, weirdly, Santorum ended last night in pretty good shape for New Hampshire. There are two reasons for this, both of which come down to the GOP’s massive distaste for Mitt Romney: 1) Santorum’s speech and sudden reframing as a relatable, warm-blooded embodiment of the American Dream; and 2) Newt Gingrich’s all-consuming, Voldemortesque pledge to destroy Romney for all eternity. (Well, if you read between the lines.)

Santorum? We Don’t Even Know ‘Um!
Last night, after enough of a delay that pundits took note, Santorum took the podium for his speech and sheepishly apologized for reading from his notes. He proceeded to positively kill it. He spoke earnestly and with real emotion about his wife and family, his grandfather who had worked in the Pennsylvania coal mines into his 70s, and the American working class. He spoke of his daughter, born disabled with a life expectancy of just a year, who, against those odds, was now three years old; he spoke of another child lost, and of his passionate belief in the dignity of human life. His tone was strong, though at times wavered with emotion. He fed off the audience, acknowledging a zinger about Romneycare with a grin. He shouted out the New York Times for recognizing his Chuck Truck. He was humble, impassioned, patriotic, and filled with conviction. If you didn’t know anything about Santorum before last night, you’d be impressed.

There are a lot of people who didn’t know much about Rick Santorum before last night. The Nation‘s Ari Melber pointed out that the Santorum surge had spread to Google, where he was in the top three searches and the only candidate in the top 20; JESS3’s Simon Owens pointed out that Santorum searches were spiking in New Hampshire and South Carolina. Santorum was likewise trending on Twitter (ahead of even Edith & Carolyn at the height of their popularity). CNN’s Sam Feist proudly tweeted that CNN had nabbed him for the first interview. Everywhere, people were treating him like a serious, viable candidate (or, as the New York Times‘ David Carr put it: “Cable news working to unscrew the horns on Santorum so they can cover him seriously going forward.”)

But could one night of victory, one ringing speech of promise, resonate with the people who matter: the voters? Exhibit A: “Although I find myself in agreement with Santorum in foreign policy, as I listen to his speech I feel like I am connecting with him for the first time.” Exhibit B: “I call it a victory speech because that’s the way Santorum made me feel about his speech.” Exhibit C: “He talked about values that form the foundation of conservative principles. I was moved and excited…I saw toughness, love, faith and resolve. I saw a man of faith…I can’t believe I’m going to write this: We may end up thanking Iowa.” Exhibit D, E, F, G, H, and M (for Malkin).

Reports on Santorum’s big night inevitably note the time and shoe leather he put into Iowa, solidifying the narrative that he won the race the old-fashioned way, by really caring about voters. Not like some candidates who think they can just buy them. Also, he wears sweater vests. Adorable!

Newt Gingrich Hates Mitt Romney With the Burning Fire of a Thousand Suns
And so, one day after the Iowa caucuses, we have the latest Not-Romney, ready to be torn to pieces by his opponents and the world. What’s different this time? One word: Newt.

Newt Gingrich’s speech last night was extraordinary in its bitterness, anger, and vengeful resolve. He seemed less interested in his own victory than in body-blocking the presidential prospects of Mitt Romney—clearly the only person he regarded as a rival (nay, enemy). After praising Santorum, he lit into Romney, hard, as the not-Reagan, not-qualified, not-conservative meanie who went on the attack and “drowned him in negativity.” His spokesman swore to “fight Romney on the airwaves, on the beaches, on Interstate 93, on WMUR, and in every county.” It’s the ultimate game of Survivor, and Team Newt wants Romney off the island.

Going into Iowa, the allegiances were unclear. But now, thanks to Newt’s decisive glom onto Santorum’s newfound star power, everyone else can act accordingly. Perry’s likely out (he announced Tuesday night that he was heading back to Texas “to determine whether there is a path forward for myself in this race”), which means his values-voting backers in South Carolina are up for grabs. How convenient! While Newt is torching Romney at every turn, Santorum can focus on his underrated ground game in New Hampshire, surfing the perfect wave of the underdog/front-runner.

I know, I know. We’re talking about Rick Santorum. The dude definitely has baggage—and now that the media isn’t tolerating and/or ignoring him, attention will be paid. But is a week long enough to take the bloom off the rose? (It took two for Newt.) New Hampshire voters may not be pro-social-issues like Iowans, but will they be anti enough to tank a surging Santorum? Romney’s outspent everyone, it’s true—but now that we know his $10 million in Iowa didn’t budge the needle from the last time around, perhaps we should be putting less stock in that going forward.

More to the point, will people care? The GOP is weary. They’ve watched a slate of meh candidates skip gaily across the news cycle, failing to meet expectations, getting built up and torn down, while the one they can’t quite fall in love with stands there hopefully with flowers and candy. If they have a shot at another Romeo, won’t they finally want to take it? Especially when they’ve got Newt-as-Iago whispering into their ears?

Mixed Shakespearean metaphors aside, it does feel like the game has changed. Santorum is rising, and—especially if Newt has his way—Romney is going down.