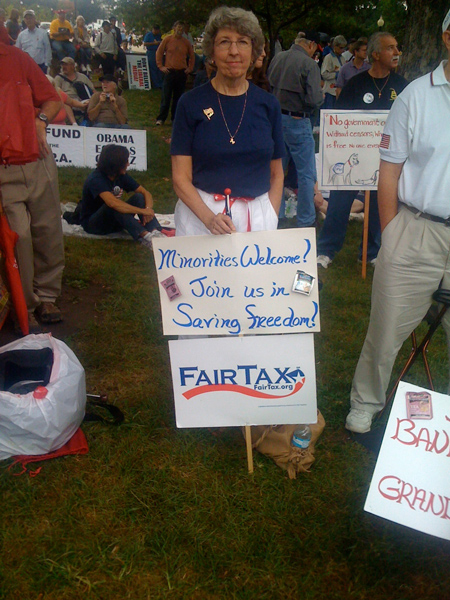 The tea party movement has been keeping a pretty low profile lately, but that doesn’t mean it has disappeared. Tea partiers are still fighting political battles at the local level and gearing up for the presidential election. Here’s a brief roundup of recent tea party news you may have missed:

Rewriting US history to white-out slavery: Tennessee tea party activists have asked the state legislature to introduce a bill that would force the state to rewrite school textbooks to excise references to the Founding Fathers that might tarnish the image tea partiers would like to have of them. They don’t want school kids to know the founders’ uglier side, things like, for example, some of the founders owned slaves, had sex with them, and fathered children with them. In a press conference in mid-January, according to the Memphis Commercial Appeal, the activists handed out materials that said:

Fayette County attorney Hal Rounds, the group’s lead spokesman during the news conference, said the group wants to address “an awful lot of made-up criticism about, for instance, the founders intruding on the Indians or having slaves or being hypocrites in one way or another.

“The thing we need to focus on about the founders is that, given the social structure of their time, they were revolutionaries who brought liberty into a world where it hadn’t existed, to everybody — not all equally instantly — and it was their progress that we need to look at,” said Rounds, whose website identifies him as a Vietnam War veteran of the Air Force and FedEx retiree who became a lawyer in 1995.

Keeping the birther movement alive: Tea Party Nation leader Judson Phillips may be bankrupt and thousands of dollars in debt to conservative billionaire and Las Vegas hotel magnate Sheldon Adelson, but that hasn’t stopped him from going to Florida this week on a Tea Party Express “get out the vote” tour before the GOP primary. Along with his speaking events on the campaign trail, Phillips is doing his part to defeat Obama by supporting a lawsuit filed in Georgia by birther queen Orly Taitz challenging Obama’s qualifications to be on the ballot there. Conceding that similar suits in other states have been dismissed, Phillips remains hopeful that they are the key to defeating Obama in November. “These are must win states for Obama. If he were excluded from one or more of these states, it would become almost impossible for Obama to win reelection,” writes Phillips.

Still Raising Big Money: For all the talk of the tea party movement being “grassroots,” they are certainly taking on some of the trappings of the establishment, namely by starting super-PACs. Two big tea party groups, Tea Party Express and FreedomWorks, have both started super PACs that can accept unlimited contributions to use in independent expenditure campaigns during this year’s election. FreedomWorks is hoping to raise $5 million to push its free-market agenda through “street-level politicking.”

Of course, whether these two organizations really qualify as the tea party movement is an open question. Tea Party Express was started by GOP political consultants in California who were already been attacking Obama in 2008 with outside expenditures, and FreedomWorks is a spin-off of the oil-rich Koch brothers’ Citizens for a Sound Economy, a corporate front group that helped the tobacco and other big industry fight regulation and taxes. They’re not purely grassroots organizations.