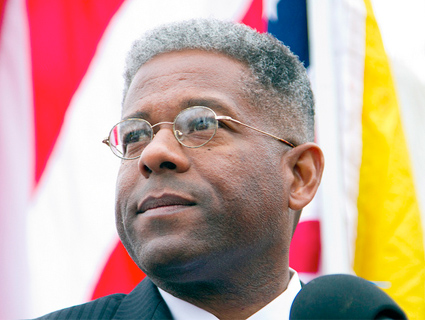 Rep. Allen West (R-Fla.), the firebrand tea party House freshman, told a crowd of Palm Beach Republicans on Saturday night that Barack Obama, Harry Reid, Nancy Pelosi, and Debbie Wasserman-Schultz should leave the country. But West may be the one sent packing soon: His own fellow Republicans in Florida, possibly fed up with his fiery rhetoric, are close to redistricting him out of a job.

Holding forth at the GOP’s Lincoln Day Dinner in Palm Beach’s tony Kravis Center, the ex-lieutenant colonel who resigned his Army commission under less than honorable circumstances, gave the crowd a militarist stemwinder to remember. “This is a battlefield that we must stand upon,” he said, referring to Florida’s status as a contested electoral state:

After a standing ovation, West added, “Yeah, I said ‘hell’…I will not allow President Obama to take the United States of America and destroy it.” Here’s the video:

With his latest full frontal charge, West seems to have misidentified the enemy. In Tallahassee, the state’s establishment Republicans are quietly working on a redistricting plan that would leave the tea party bomb-lobber without a constituency. When Floridians elected West to Congress in 2010, they also approved two ballot measures that ensured fair “compact” redrawing of political districts: Basically, the Republican-dominated Legislature would be able to redraw the political map, but they could no longer gerrymander districts that were 100 miles long and 1 mile wide. The state picked up two congressional seats in the latest census; in order to maximize benefit to the party, they’d have to sacrifice a few seats in Democratic strongholds—and that includes West’s South Florida district.

The new redistricting plan, which leaves West’s 22nd District much more Democratic, sailed through the Florida House and awaits a vote in the Senate. Will Weatherford, the Republican speaker of Florida’s House, defended the process. “The Republican-led Legislature right now is not going to create an incumbent protection program for redistricting,” he told the Tampa Bay Times. “The time to win seats is not during redistricting. This is the time to draw legally compliant maps.”

West’s defenders in the right-wing blogosphere are fervently talking conspiracy theory, and Weatherford is in the middle of it: He’s also a big supporter of Mitt Romney, the “moderate” Republican choice, and he appeared at the GOP presidential debate’s spin room in Jacksonville last week to defend Romney against the party’s more conservative insurgents. The blogs are now attacking the redistricting plan implicating West as a Romney plot to water down Republicanism. The Shark Tank‘s Javier Manjarres, a respected Florida conservative blogger, quoted a “very high ranking member of the Florida Legislature” as telling him, before the redrawing process started, that “Allen West is screwed.” Another blogger complained: “The GOP elites keep screwing over Conservatives. It really is time for Conservatives to rethink their allegiance to the GOP.” So hot is the temperature online that Politico dedicated an entire story Monday to aggregating the bloggers’ pro-West, anti-GOP frustration.

If Romney wins in Florida on Tuesday, and if he goes on to secure the presidential nomination, he may face a conservative backlash in Florida and beyond. As Townhall‘s John Ransom puts it: “Yeah, yeah, Obama is the Devil, but Mitt and company have been willing accomplices.”