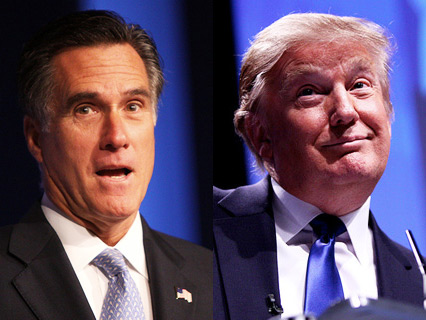 A day after Mitt Romney was slammed from all sides for declaring he’s not “concerned with the very poor” (because they enjoy such a swell safety net), why would he accept an endorsement from celebrity-birther, .001-percenter Donald Trump and appear at the magnate’s Las Vegas casino to do so?

The first words that come to mind are: too soon. Such a move will only reinforce the meta-narrative that Romney is far removed from the 99-percenters. It will also associate him with a fellow who was humiliated by Barack Obama last spring, when the president at the White House Correspondents’ Association Dinner eviscerated Trump with humor the same weekend he was secretly overseeing the raid that killed Osama bin Laden. Trump’s unfavorable rating last spring—before his birther crusade crashed and burned—was 47 percent.

But Romney may not have had a choice. This morning, several media outfits—Politico, the New York Times, and the Atlanta Journal-Constitution—were reporting that Trump was going to endorse Newt Gingrich. This suggests “the Donald” was talking to both camps to boost his leverage as he was negotiating a deal. (Quelle surprise!)

The Romney camp had to worry that a Trump endorsement of Gingrich would hurt the front-runner’s efforts to keep Gingrich from mounting a full-scale tea party rebellion against Romney. In the closing hours of the Florida primary, Gingrich was claiming to be the embodiment of the tea party wing of the GOP and trying to set up a civil war between the true-believers and the GOP establishment. Winning Trump’s seal (or bark) of approval would certainly have helped Gingrich in this endeavor and, undoubtedly, caused the commentariat to question whether Romney really could win over the party’s conservative base. A Trump nod would have boosted Gingrich’s latest ploy .

To prevent that, Romney needed to be hired (politically) by Trump. And it’s not difficult to imagine Trump laying down a demand: If I endorse you, you better damn well hold my hand in public. So what’s a rich guy gonna do? He will allow himself to be played by Trump, to be his sidekick, if only for the moment. This shows that Romney cannot escape the gravitational pull of GOP craziness. The longer Gingrich remains in the race, the more Romney will have to pander to the Obama-hating extremists who make up much of his party. It’s another sign that in a primary contest, it’s hard to win by betting against the house.