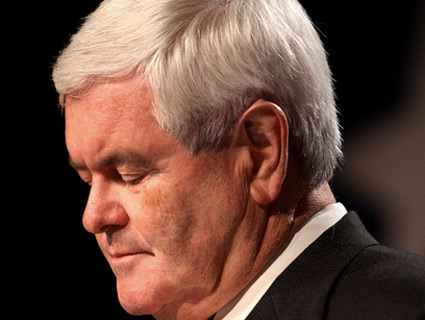 Thirty-four years ago, Newt Gingrich summed it up. In a speech to College Republicans—shortly before he would win his first election to Congress—the future speaker had a piece of fundamental advice for the young and impressionable GOPers: “I think one of the great problems we have in the Republican party is that we don’t encourage you to be nasty. We encourage you to be neat, obedient, and loyal, and faithful and all those Boy Scout words.”

Nasty—that was a critical component of Gingrich’s formula for political success. And through the 1980s and 1990s, as Gingrich wielded his nastiness to overturn the Democratic order in Congress and seize the people’s House for the GOP, he was hailed by Republicans. Now, following his 47 to 32 percent loss to Mitt Romney in the Florida presidential primary and Gingrich’s promise—make that, threat—to pursue this nasty nomination contest all the way to the convention in sweltering Tampa in August, the Republican Party has a monster-of-its-own-creation in its china shop. (Imagine a Tasmanian devil in Tiffany & Co.) Despite Romney’s 15-point comeback victory, it seems that the GOP will still be burdened and discombobulated by the Wrath of Gingrich. During his concession speech Tuesday night—which was light on the concession—Gingrich vowed to contest every primary and caucus, as his supporters held up signs that said, “46 STATES TO GO.”

It’s not uncommon for political losers to hang on longer than they should. (See Rick Perry.) So Gingrich’s vow to ignore the play-nice-and-get-out pleas of the Republican establishment and battle all the way to the summer is not surprising. But if he is serious about vengeance, he will have to cling on for longer than a week or two. February’s primaries—Nevada and Maine (February 4); Colorado, Minnesota, and Missouri (February 7); and Arizona and Michigan (February 28)—hold few opportunities for the goblin of Georgia. These states are Romney-friendly and not well-suited for Gingrich’s fire-breathing and not-so-coded rants against food stamps and Saul Alinsky. If he wants Romney’s blood, he will have to stay in the hunt until at least Super Tuesday, where he can try to work his dark magic on his home state of Georgia, Oklahoma, Tennessee, and Idaho. Alabama and Mississippi come a week later.

This means another five or six weeks at least of Gingrich’s not-so-creative destruction, with him hurling his patented nastiness at Romney—and Romney both firing back and, more important, trying to keep up with Gingrich’s extreme anti-Obamaism.

The latter may be more of  the problem for Romney than Gingrich’s direct slams on him. Candidates often pound at party comrades during hard-fought nomination contests, and the winner, even though dinged, usually ends up able to compete effectively in the general. (Barack Obama survived Hillary Clinton’s barbs.) But Gingrich is dragging Romney to the right in terms of, yes, nastiness. (During his victory speech in Tampa, Romney declared that Obama represents “the worst of what Europe has become”—of course, without explaining what that meant.)

The GOP primary electorate is in a foul mood. Many of these voters seem to want a candidate who feels their hatred for the president. (See Rick Santorum’s exchange with that lady who maintained Obama is a Muslim.) This whole primary campaign has been a game of revolving Obama-loathers. While Romney has tried to come across as not a hater—he’s disappointed in Obama; he doesn’t despise him—one by one, fire-breathing Obama-bashers who represent the dark and angry mood of their party’s base have risen to be the non-Romney of the GOP race, only to fall down due to their own limitations. And Gingrich is the last of these. (Ron Paul is essentially operating in an alternative universe; Rick Santorum is running on the fumes of Iowa.)

With his mean-spirited and extreme rhetoric, the former House speaker does embody the soul of his party at this point. Though Gingrich is burdened with a ton of baggage that obviously undermines his chances to win a general election—and many Republican voters do care about that—Romney still has to ensure that Gingrich does not run away with the hearts of GOP voters. Consequently, he has to keep the meanness/Obama-hatred gap that exists between him and the former Freddie Mac historian/consultant/strategic adviser from becoming too wide. Yet doing so makes Romney less acceptable to those fickle independent voters who yearn for candidates who can solve problems in Washington without partisan fighting. If Romney has to engage in such Newt-neutralization for weeks, if not months, he will further define himself in a manner likely to alienate independents and middle-of-the-road voters.

There’s an old-saying: Don’t get into a fight with a skunk; you’ll only come out smelling. Romney cannot remain in combat with Gingrich—even if he continues to win delegates—without being tainted by the stench of this skirmish.

Gingrich’s nastiness—now aimed at Romney—is an accurate reflection of the Republican Party. In recent years, Gingrich-style extremism has become its norm. Sarah Palin (who has been egging on Gingrich) claimed during the 2008 race that Obama had been “palling around” with terrorists. When the Democrats were poised to pass a health care reform bill in the House, GOP leaders of that body sponsored a Tea Party rally, where demonstrators chanted “Nazis, Nazis” in reference to the Dems. Donald Trump made GOP voters swoon with his birther talk. Gingrich himself claimed that Obama could only be understood as a fellow who holds a Kenyan, anti-colonialist view of the West. Death panels, a government takeover of the health care system, socialism—it’s been nasty for years in GOPland. Romney’s challenge is to win over these people, without fully endorsing the malice. (Thus, Obama=Europe.)

Now on the receiving end of vicious blasts, Gingrich has taken to whining that he’s the victim of lies and extreme attacks. After all his years of practicing gangster politics, he hardly warrants sympathy. (And many of Romney’s assaults on him have been accurate.) But he also has been trying mightily in recent days to depict himself as the personification of the conservative movement, arguing that an attack on him (by Romney, the Republican establishment, or the media) is an attack on the tea party. (This is a right-wing version of identity politics.) And he’s been saying that the conservative movement simply won’t stand for a “Massachusetts moderate”—or a “liberal” who supports abortion rights and gun control, as he dubbed Romney this week—as the Republican Party nominee.

It’s his last play—to try to ignite a civil war within the GOP. At the moment, with the smell of his Florida defeat still in the air, he seems rather serious about this endeavor. With his own record of flip-flops and his less-than-inspiring personal history, he’s certainly not the perfect leader for such a crusade. But if the dissatisfaction on the right is deep enough, perhaps he can be a sufficient vehicle.

Notwithstanding the loss in Florida—and with only 5 percent of the GOP delegates selected—Gingrich is still positioned to inconvenience, if not undermine, Romney. And he has choices. Will he try to rally conservative foot soldiers and lead a Pickett’s Charge against the front-runner, hoping to do better than Lt. General James Longstreet? Or will he go the way of a suicide bomber and become the doomsday device of the GOP?

With his Florida success, Romney is back on that path to the nomination. But Gingrich is a problem for the front-runner and the entire GOP establishment—and that’s because he’s following the scorched-earth playbook that he long ago developed for the party and that the party has embraced for years.