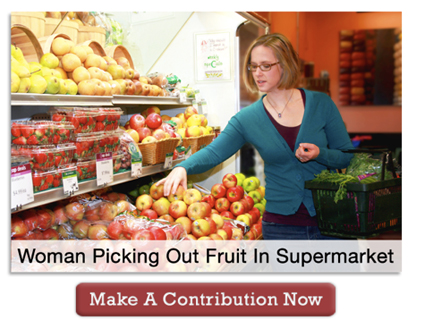 As a political reporter, I spend most of my waking hours deleting emails from various campaigns asking for money. I know that sounds really glamorous, but after opening the nth email with an authentic-sounding subject line (a smattering, from Buzzfeed) only to find a stock-photo-laden pitch, it starts to wear on you.

That is what makes this pitch, from Sen. Al Franken (D-Minn.), and featuring a stock photo of a woman picking fruit at a supermarket, stand out:

Hello, I’m Woman Picking Out Fruit In Supermarket. And I’m writing to you today on behalf of Al Franken—a Senator who stands up for real people (including those of us who make a living posing for stock photos).

You’ve seen us shaking hands in business suits, posing together on college campuses, and laughing while we eat salads. You’ve seen us on billboards, in magazines, and on pretty much every political website. We are the people in stock photos.

I know the people in stock photos don’t typically write emails, but Al isn’t your typical politician—he’s a progressive fighter who puts people first. Will you stand with us by making a small contribution to his grassroots campaign right now?

There’s a reason I’m standing with Al. You see, I’m not just Woman Picking Out Fruit In Supermarket. I am also an actual woman worried about the right-wing attacks on my access to health care.

Al’s a Senator I can count on to stand up for all women—whether they’re walking a golden retriever in the park, pointing at a chart in an important meeting, or simply staring into the camera.

Your contribution will help keep Al’s campaign strong so he can keep fighting for us—click here to give today!

I hope I can count on you for a contribution. After all, the rights to stock photos aren’t cheap. And neither is the actual grassroots organizing Al’s team does every day, fighting to keep progressive values — and the middle class — alive and well.

And whether you’re a Tattooed Guitar Player, a Guy Wearing Hard Hat, or an Elderly Couple Sitting At Kitchen Table, there’s no better way to show your support than by making a contribution today.

Thanks for standing with Al.

Woman Picking Out Fruit In Supermarket

P.S. As someone who eagerly reads every email I get from Al, I have to be honest: I don’t really understand why he’s under the impression that adding an “extra ask” in the P.S. of every message is helpful. But I asked my friends Scientist Looking At Line Graph and Doctor With Stethoscope Hanging Around Her Neck, and they both agreed it works. So: Would you click here to make a contribution of $5, $10, or $25 today?

Since halting his work as a satirist to run for Senate, Franken’s gone to great lengths to cultivate an image as a serious policy wonk. It’s good to see that career change hasn’t caused any lasting damage to his sense of humor.