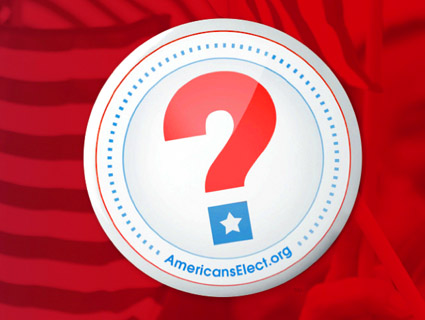 Nearly two years ago, former junk-bond financier Peter Ackerman founded Americans Elect in hopes of fielding an independent presidential candidate in 2012. The organization’s big idea was that a diverse field of contenders would compete in a series of online caucuses, bypassing the party system and “politics as usual.” The resulting “nonpartisan” ticket, consisting of a Democrat and a Republican, would seize the popular imagination and the rest would be history.

Yet by last week, not a single candidate had qualified for Americans Elect’s first online caucus, forcing the group to push it back to May 15. This week, after a midnight deadline passed on Tuesday morning and there were still no qualified candidates, the caucus was moved again, to May 22.

This isn’t Americans Elect’s first stumble. It got off to a rocky start when it switched from being a 527 group, which must disclose its donors, to a secretive 501(c)(4), a dark-money group that does not. Campaign finance watchdogs say the group is actually a political party and should be registered as such. In March, AE quietly changed its bylaws so that no single donor could cover more than 20 perecent of its total budget, meaning that future small donors would be reimbursing the group’s wealthy angels. Its website does not accept donations over $10,000. Ackerman, who has reportedly contributed $8 million of AE’s $40 million budget, says the new rules will ensure that big donors don’t unduly influence the process.

And then there’s the question of whether AE can effectively challenge the two-party system. “The Democratic and Republican parties have, over the years, been able to build huge barriers to entry for any other organization or individual who wants to compete in the election process,” says Darry Sragow, a Democratic strategist and member of Americans Elect’s board of advisers who spent four months discussing the group with prospective high-profile candidates last fall. Sragow says that every politician he spoke with agreed that the political process was broken and left their meeting with a “high level of comfort” with the group’s goal of chipping away at the two-party duopoly. “We briefed one sitting United States senator who said, ‘If I was running for reelection, I would vote against myself. The system’s gridlocked, and I think we ought to throw everybody out,'” Sragow recalls. “He literally said that.” Yet ultimately, every potential candidate was too “risk-adverse” to ditch their party and pursue an independent presidential bid.

As it stands, former Louisiana Gov. Buddy Roemer is the front-runner among the declared candidates on the Americans Elect’s website. About 4,900 people have cast preliminary “support clicks” for him, far short of the 1,000 clicks from 10 different states he needs to qualify for the caucus. Former Salt Lake City Mayor Rocky Anderson comes in second with about 3,000 supporters, but because Americans Elect’s rules deem him less qualified, he needs 50,000 clicks to qualify. (As spelled out here [PDF], former members of Congress, cabinet members, mayors of large cities, CEOs, union officials, and high-ranking military officers require less support to run in AE’s primary.)

Online voters also have the option of nominating their own candidates. Rep. Ron Paul (R-Texas) leads that category with more than 9,000 supporters, but he has expressed no interest in a third-party bid. The next runners-up are former Republican candidate Jon Huntsman, Sen. Bernie Sanders (I-Vt.), President Barack Obama, and New York Mayor Michael Bloomberg.

“We briefed one sitting United States senator who said, ‘If I was running for reelection, I would vote against myself.'”

The Americans Elect website cost a staggering $9 million to build, yet it appears not to be attracting the swarms of visitors it’s designed to handle. Both Roemer and Sragow told me that the considerable lengths AE has gone to in order to protect its voting process from hackers are likely turning away some would-be participants. To vote, users must verify their eligibility with their current address, date of birth, and the last four digits of their Social Security number.

Assuming it does field a candidate, Americans Elect has secured ballot access in 26 states and is awaiting word from 8 more, according to spokeswoman Ileana Wachtel. It maintains that its eventual nominee will be on the ballot in all 50 states by Election Day.

“I’m a reform candidate. They [Americans Elect] don’t seem to be [interested in] a reform candidate. All they’re focusing on is getting on the ballot,” opines Roemer, who’s running as a crusader against big money in politics. But he believes the group is making a good-faith effort to voice the concerns of citizens who feel disempowered. “I think that they are imperfect but are making a noble effort to improve the system, and I want to be a part of that attempt,” he says. He adds the caveat that should he get AE’s nomination, he would pay back any money it gives his campaign.

“I think Americans Elect is a major step forward toward the goal of creating a more competitive election process,” Sragow says, comparing it to the tea party and the reform-oriented No Labels. “Over time, it would certainly be reasonable to assume that these efforts will gain traction, they’ll become more significant, and ultimately we’ll see government addressing the problems people face in their day-to-day lives.”

Americans Elect’s online convention, where its final presidential ticket will be decided, is scheduled to begin on June 12.