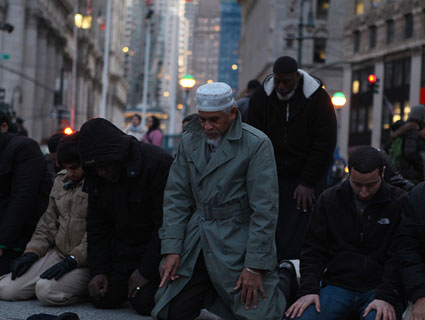 Muslim protesters kneel down to pray at an event challenging the NYPD's surveillance program.<a href="http://www.flickr.com/photos/samgracelewis/6814465813/in/photostream">Sam Lewis</a>/Flickr

Sayed Farhaj Hassan began basic training in the US Army the day before 9/11. Two years later, he deployed to Iraq. Then a few months ago, he learned that the New Jersey mosque he had attended for 16 years, Astaana-e-Zehra, had turned up in a New York Police Department document assessing the threat of Iran-sponsored terrorism to New York City.

“I felt violated,” says Hassan, who is still an Army reservist. “Everything I signed up to defend in the Army was being thrown away by the New York City Police Department.”

Hassan is a plaintiff in a lawsuit filed Wednesday alleging that the NYPD violated the constitutional rights of New Jersey’s Muslim community through a massive CIA-assisted surveillance program, which was first revealed by the Associated Press. Documents released by the AP show that beginning in 2002 the NYPD covertly monitored Muslim neighborhoods, mosques, and businesses. The case is the first to challenge the NYPD’s sweeping surveillance program.

The case was brought by California-based Muslim Advocates, a group led by Farhana Khera, a former aide to Sen. Russ Feingold (D-Wis.). The suit represents a growing conflict over the legality of post-9/11 security tactics that critics allege amount to racial profiling of Muslim Americans. And the NYPD’s sweeping program provides an appropriate test case of law enforcement authority in this arena. While New York City officials like Mayor Michael Bloomberg have said the program was legal and that the NYPD was “following leads” and not profiling on the basis of religion, the AP notes that there is “no indication that criminal leads prompted any of the [NYPD surveillance] reports.” The documents themselves contain maps showing the locations of mosques and dossiers on Muslim-owned businesses.

“For a number of years, there was a certainly a feeling that people were being singled out and targeted for scrutiny by law enforcement,” Khera says. “It created a lot of fear and concern in the community, but also a lot of tremendous anger and frustration. Americans who are simply going about their daily lives, attending school, running their businesses, attending their places of worship, and haven’t engaged in wrongdoing—and yet they’re being subjected to surveillance by the largest police department in the country.”

Shortly after the AP story broke, Muslim Advocates began reaching out to individuals in New Jersey whose businesses, mosques, or organizations had been named in the NYPD records. Aide from Hassan, the plaintiffs include two imams, a college student, and two business owners.

The NYPD documents show that the department scrutinized Muslim student organizations all over the region, including at local universities. “It was shocking to everyone, especially on the Rutgers campus,” says Moiz Mohammed, a Rutgers student who is a plaintiff in the suit. “After that point onwards, I was more conscious of my religious practices, I made sure no one was around when I was praying.”

The NYPD monitoring effort has sparked fears among New Jersey Muslims that they could be targeted in sting operations, which have become a staple of post-9/11 terrorism cases involving the FBI. “Now we’re concerned about, will someone come into the masjid and intentionally try and incite something? Will there be someone intentionally hired by law enforcement to try and bait someone into doing something they wouldn’t normally do?” says Imam Deen Shareef, another plaintiff, who heads the Council of Imams of New Jersey. Two mosques represented by the council were named in NYPD documents.

The limits on the powers of law enforcement post-9/11 are anything but clear. Technically, the NYPD’s authorities are governed by the so-called Handschu Guidelines, which arose from a 1971 court case involving activists who were spied on by the New York police. The guidelines specify that the NYPD is not allowed to monitor individuals without evidence of criminal wrongdoing. But subsequent legal fights over the rules have been resolved in the NYPD’s favor. Avoiding the murky Handschu rules is at least part of the reason why the lawsuit was filed in New Jersey, instead of New York.

The plaintiffs are hoping for a result that prevents the kind of blanket surveillance engaged in by the NYPD from happening again.

“What’s next? Where does it stop?” Hassan asks. “Where is the right to privacy? It doesn’t exist if you’re a Muslim anymore. This is what this tells us.”