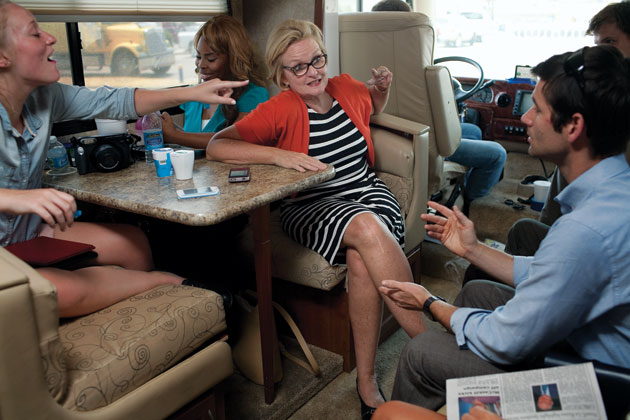 “ALL THESE GOOD MEN WANT TO DO,” the interviewer protested, “is run attack ads against you with money that is untraceable. Why do you have to make that ugly?” Laughter rippled through The Colbert Report‘s studio in early May, as Sen. Claire McCaskill (D-Mo.) struggled to keep a straight face. She got the joke all too well. Stephen Colbert is the man who popularized the absurdities of political money, with his secret “spooky PACs” and Americans for a Better Tomorrow, Tomorrow super-PAC. McCaskill is the senator who, more than almost any other politician, has borne the brunt of 2012’s dark-money onslaught. “I certainly expect attack ads and commercials, but what I don’t expect is for all this to be secret,” McCaskill said. “So we’re trying to fight back, Stephen.”

How could she be when secret money is bankrolling blistering attack ads blanketing her home state? But in her reelection bid, McCaskill isn’t just complaining about secretly funded ads—she’s made them her call to arms. Her debut ad blasted the out-of-state “special interests” clogging up the airwaves; a follow-up slammed “secret money” from “big oil and insurance companies.”

As of July 17, outside groups had bought $12.75 million worth of ads attacking McCaskill. (Groups supporting her had spent just $1.3 million.) Of that, $7.6 million came from groups that conceal their donors, according to a media-buying source in Missouri. McCaskill’s dark-money foes include the heaviest hitters in Republican politics: Karl Rove’s Crossroads GPS; David Koch’s Americans for Prosperity; and the 60 Plus Association, billed as the conservative counterweight to the AARP. “I’m getting all the name brands,” she told MSNBC’s Chris Matthews in April. “I’m at the top of a lot of folks’ lists.” 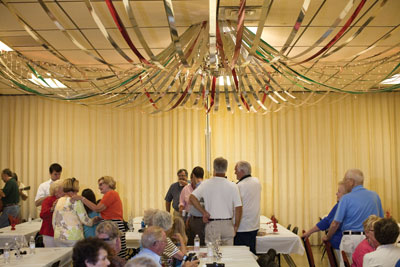 Indeed. Republicans see McCaskill’s seat as one of five prime targets in their effort to win back the Senate (to do so, they need to gain four seats). But this battleground was targeted with one of the earliest and biggest dark-money offensives of all: The attacks against McCaskill, a moderate Democrat representing a conservative-trending state, began 17 months before the election. Rove’s American Crossroads super-PAC ran a radio spot in June 2011 jabbing McCaskill for voting like a “big-spending liberal” and launched a website, TruthAboutClaire.com, devoted to attacking her. Crossroads GPS followed up that July with two ads slamming McCaskill for hiking taxes and jacking up gas prices; two more spots aired by year’s end.

Running through all the ads is a familiar theme: McCaskill is out of touch with Missourians. “The central issue in Missouri is you have a politician running for reelection who’s at odds with the majority of her constituents,” says Jonathan Collegio, a spokesman for the Crossroads groups. (McCaskill declined an interview request.)

It’s true that McCaskill’s approval rating has hovered around 40 percent since the fall of 2011, according to Public Policy Polling. In a July 29 Mason-Dixon poll, McCaskill trailed Rep. Todd Akin (R-Mo.), a tea party favorite, who clinched the GOP nomination on August 7; the Cook Political Report rates her race a toss-up.

Why not “fight fire with fire, instead of fighting fire by going ‘Oh my God, I’m on fire’?” Stephen Colbert asked McCaskill.

So, Colbert asked McCaskill in May, with her job in Congress on the line, why not chase after some spooky-PAC money of her own? Why not “fight fire with fire, instead of fighting fire by going ‘Oh my God, I’m on fire’?”

“I really don’t want a spooky PAC,” she insisted. “I want the voters to be able to look at who’s giving me money and make up their mind.”

Perhaps that’s for the best, since there’s little chance progressive outside groups and donors will come to McCaskill’s rescue. She’s largely supported President Obama’s agenda, but her relationship with liberal advocates has been rocky. In July 2009, during the Senate’s fight over cap-and-trade climate legislation, McCaskill claimed carbon standards would hurt Missouri families and businesses; MoveOn.org, the progressive political action committee, urged its members to call her office and tell her to “stop repeating Republican talking points about clean energy.” In 2011, she again drew harsh criticism from the left when she teamed up with Sen. Bob Corker (R-Tenn.) to introduce legislation to cap government spending. Daniel Mintz, MoveOn.org’s director of campaigns, told me the group’s money and organizing muscle will focus on “getting great progressives like Elizabeth Warren, Sherrod Brown, and Tammy Baldwin elected” in Massachusetts, Ohio, and Wisconsin. McCaskill’s name was pointedly left off the list.

While McCaskill can’t count on big outside money, she’s raking it in elsewhere. In July, she broke a Missouri fundraising record, banking $2.6 million in three months—87 percent from donors who gave less than $200. Fittingly for McCaskill, a surge of small donors may prove the best defense against the dark-money barrage.