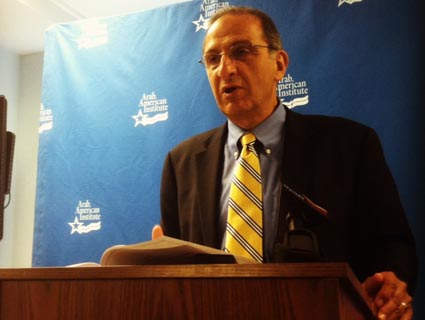 A majority of Republicans have unfavorable views of Muslim and Arab Americans and don’t trust them with responsibilities in government, according to a new poll from the Arab American Institute.

“The problem is one, partly borne I think of bigotry,” said Jim Zogby, the institute’s president, citing events like the controversy over the Islamic community center near Ground Zero, the anti-Shariah bans passed in conservative states, and the recent letter penned by Rep. Michele Bachmann (R-Minn.) and a handful of other House Republicans that accused certain Muslims serving in the federal government of ties to Islamic extremists. “The numbers tell us that when you have a decade-long campaign, it takes a toll.”

Although 60 percent of Republicans say they do not personally know any Arabs or Muslims, a plurality of Republicans polled by the institute expressed unfavorable views of Arab Americans and Muslim Americans (47 and 48 percent, respectively), while a majority expressed unfavorable views of Arabs and Muslims in general. Fifty percent of Republicans said that if a Muslim-American were to “obtain a position of influence in government” that their religion would “influence their decision making”; the reverse was true for Democrats, 50 percent of whom said religion wouldn’t influence a Muslim-American official’s decision-making. A slightly lower percentage of Republicans, 41 percent, said they think ethnicity would “influence” an Arab-American’s decision-making if he were to achieve a position of influence in government. Again, fifty-percent of Democrats say it would not.

There is one flaw I see with the question, however: Without results surveying similar opinions about other groups, it’s hard to know to what extent the responses reflect a commonsense observation (ethnicity and religion influence decision-making) or bias (whites and Christians can perform their duties without such influence, but Muslims and Arabs can’t). Asked about this by Mother Jones, Zogby said that next time they would seek to add a comparison to other groups in the poll, but that the numbers tracked closely with the favorable/unfavorable ratings expressed by each group.

“It’s not 9/11 that did it,” said Zogby. “The numbers after 9/11 were not as significant as they are today.” In 2003, for example, the same poll showed that 40 percent of Republicans held an unfavorable view of Muslims, while in 2010 (the year of the controversy over the Islamic community center near Ground Zero) unfavorable views of Muslims among Republicans rocketed to 85 percent. So the 57 percent unfavorable rating the poll found in 2012 is actually an improvement.

While the poll focused on views of Arabs and Muslims, it also surveyed general attitudes towards other religious groups. Presbyterians and Jews come out with the highest favorable ratings among both Democrats and Republicans, 72/83 and 72/75 respectively. Only a slight majority of Americans, 52 percent, hold favorable views of Mormons, and here we also see a partisan divide: Mormons get a 45/35 favorable/unfavorable rating from Democrats, and a 58/29 favorable unfavorable rating from Republicans. (If elected, GOP presidential candidate Mitt Romney would be the first Mormon president of the United States.)

The results of the survey shed light on the social trends underpinning certain recent events, including the recent controversy that erupted after over Bachmann and several other GOPers accused Secretary of State Hillary Clinton’s aide Huma Abedin and other Muslims in government of ties to Islamic extremists. Though the Republican leadership (absent Mitt Romney, who was asked about it and declined to comment) repudiated those accusations, the Arab American Institute’s poll numbers suggest that most Republicans actually share the suspicions underpinning Bachmann’s accusations.

“Arabs and Muslims have become, like abortion and gay marriage, part of the partisan divide in America,” Zogby says.