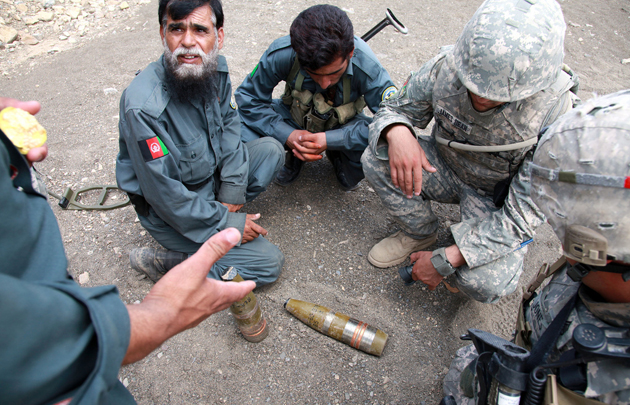 Imagine for a moment that almost once a week for the last six months somebody somewhere in this country had burst, well-armed, into a movie theater showing a superhero film and fired into the audience. That would get your attention, wouldn’t it? James Holmes times 21? It would dominate the news. We would certainly be consulting experts, trying to make sense of the pattern, groping for explanations. And what if the same thing had also happened almost once every two weeks in 2011? Imagine the shock, imagine the reaction here.

Well, the equivalent has happened in Afghanistan (minus, of course, the superhero movies). It even has a name: green-on-blue violence. In 2012—and twice last week—Afghan soldiers, policemen, or security guards, largely in units being trained or mentored by the US or its NATO allies, have turned their guns on those mentors, the people who are funding, supporting, and teaching them, and pulled the trigger.

It’s already happened at least 21 times in this half-year, resulting in 30 American and European deaths, a 50% jump from 2011, when similar acts occurred at least 21 times with 35 coalition deaths. (The “at least” is there because, in May, the Associated Press reported that, while US and NATO spokespeople were releasing the news of deaths from such acts, green-on-blue incidents that resulted in no fatalities, even if there were wounded, were sometimes not reported at all.)

Take July. There have already been at least four such attacks. The first, on July 1st, reportedly involved a member of the Afghan National Civil Order Police, a specially trained outfit, shooting down three British soldiers at a checkpoint in Helmand Province, deep in the Taliban heartland of the country. The shooter was captured. Two days later, a man in “an Afghan army uniform” turned his machine gun on American troops just outside a NATO base in Wardak Province, east of the Afghan capital Kabul, wounding five before fleeing. (In initial reports, the shooter in all such incidents is invariably described as a man “in an Army/police uniform” as if he might be a Taliban infiltrator, and he almost invariably turns out to be an actual Afghan policeman or soldier.)

Then, on July 22nd, a security guard gunned down three police trainers—two former US Customs and Border Protection agents and a former United Kingdom Revenue and Customs Officer (while another retired Border Protection agent and an Afghan interpreter were wounded). This happened at a police training facility near Herat in Afghanistan’s generally peaceful northwest near the Iranian border. The next day, a soldier on a military base in Faryab Province in the north of the country turned his gun on a group of American soldiers also evidently working as police trainers, wounding two of them before being killed by return fire.

Note that these July attacks were geographically diverse: one in the Taliban south, one east of the capital in an area that has seen a rise in Taliban attacks, and two in areas that aren’t normally considered insurgent hotbeds. Similar attacks have been going on for years, a number of them far more high profile, including the deaths of an American lieutenant colonel and major, each shot in the back of the head inside the heavily guarded Afghan Interior Ministry in Kabul; the killing of four French soldiers (and the wounding of 16) by an Afghan non-commissioned officer after an argument; the first killing of an American special forces operative by a US-trained Afghan commando during a joint night raid; an elaborate attack organized by two Afghan soldiers and a civilian teacher at a joint outpost that killed two Americans, wounded two more, and disabled an armored vehicle; and the 2011 shooting of nine trainers (eight American officers and a contractor) in a restricted section of Kabul International Airport by an Afghan air force pilot.

In 2007-2008, there were only four green-on-blue attacks, resulting in four deaths. When they started multiplying in 2010, the initial impulse of coalition spokespeople was to blame them on Taliban infiltrators (and the Taliban did take credit for most of them). Now, US or NATO spokespeople tend to dismiss such violence as individual pique or the result of some personal grievance against coalition forces rather than Taliban affiliation. While reaffirming the coalition mission of training a vast security force for the country, they prefer to present each case as if it were a local oddity with little relation to any of the others—”an isolated incident [that] has its own underlying circumstances and motives.” (Privately, the US military is undoubtedly far more worried.)

In fact, there is a striking pattern at work that should be front-page news here. Green-on-blue attacks have been countrywide, in areas of militant insurgency and not; they continue to escalate, and (as far as we can tell) are almost always committed by actual members of the Afghan military or police who have experienced the American project in their country in a particularly up-close and personal way.

In addition, these attacks are, again as far as anyone can tell, in no way coordinated. They are individual or small group acts, in some cases clearly after significant thought and calculation, in others just as clearly impulsive. Nonetheless, they do seem to represent a kind of collective vote, not by ballot obviously, nor—as in Lenin’s phrase about Russia’s deserting peasant soldiers in World War I—with their feet, but with guns.

The number of these events is, after all, startling, given that an Afghan who turns his weapon on well-armed American or European allies is likely to die. A small number of shooters have escaped and a few have been captured alive (including one recently sentenced to death in an Afghan court), but most are shot down. In a situation where foreign advisors and troops are now distinctly on guard and on edge—and in some cases are shadowed by armed compatriots (“guardian angels“) whose job it is to protect them from such events—these are essentially suicidal acts.

So it’s reasonable to assume that, for every Afghan who acts on such a violent impulse, there must be a far larger pool of fellow members of the security forces the coalition is building who have similar feelings, but don’t act on them (or simply vote with their feet, like the 24,590 soldiers who deserted in the first six months of 2011 alone). Unlike James Holmes’s rampage in Aurora, such acts, extreme as they may be, are not in the usual sense mad ones. And scattered and disparate as they may be, they have a distinctly unitary feel to them. They seem, that is, like a single repetitive act being committed, as if by plan and program, across the length and breadth of the country—or perhaps a primal Afghan scream of rejection of the American and NATO presence from an armed people who have known little but fighting, bloodshed, and destruction for more than three decades.

If the significance of green-on-blue violence hasn’t quite sunk in yet here, consider this: such acts in such numbers are historically unprecedented. No example comes to mind of a colonial power, neocolonial power, or modern superpower fighting a war with “native” allies whose forces repeatedly find the weapons they have supplied turned on them. There is nothing in our historical record faintly comparable—not in the eighteenth and nineteenth century Indian wars, the Philippine Insurrection at the turn of the last century, Korea in the early 1950s, Vietnam in the 1960s and early 1970s, or Iraq in this century. (In Vietnam, the only somewhat analogous set of events involved US soldiers, not their South Vietnamese counterparts, repeatedly turning their weapons on their own officers in acts that, like “green-on-blue” violence, got a label all their own: “fragging.”)

Perhaps the sole historical example that comes close might be the Indian Rebellion of 1857.’ That, however, was a full-scale revolt, not a series of unconnected, ever escalating individual acts.

In a situation where foreign advisors and troops are now distinctly on guard and on edge…these are essentially suicidal acts.

Whatever the singular bitterness or complaint behind any specific attack, a cumulative message clearly lurks in them that the US military and Washington would undoubtedly prefer not to hear, and that reporters, even when they are toting up the numbers, prefer not to consider too deeply. To do so would be to acknowledge the full-scale failure of the ongoing American mission in Afghanistan. After all, what could be more devastating 12 years after the invasion of that country than having such attacks come not from the enemies the US is officially fighting, but from the Afghans closest to us, the ones we have been training at a cost of nearly $50 billion to take over the country as US combat troops drawdown?

What we’re seeing in the most violent form imaginable is a sweeping message from our Afghan allies, the very security forces Washington plans to continue bolstering up long after the 2014 drawdown date for US “combat forces” passes. To the extent that bullets can be translated into words, that message, uncompromising and bloody-minded, would be something like: your mission’s failed, get out or die.

If the Aurora shootings got all the attention here last week, far more Americans are dying at the hands of Afghan allies than died in James Holmes’s hail of gunfire. And yet the message from the more deadly of those rampages is barely in the news and few here are paying attention.

In reality, the American mission in Afghanistan failed years ago. It’s as if we refused to notice, but the Afghans we were training did. Now, they are sending a message that couldn’t be blunter or grimmer from that endlessly war-torn land. Not to listen is, in fact, to condemn more Americans to death-by-ally.

Tom Engelhardt, co-founder of the American Empire Project and author of The United States of Fear as well as The End of Victory Culture, runs the Nation Institute’s TomDispatch.com. His latest book, co-authored with Nick Turse, is Terminator Planet: The First History of Drone Warfare, 2001-2050. To listen to Timothy MacBain’s latest Tomcast audio interview in which Engelhardt discusses the historically unprecedented nature of green-on-blue violence, click here or download it to your iPod here. Follow TomDispatch on Twitter @TomDispatch and join us on Facebook.