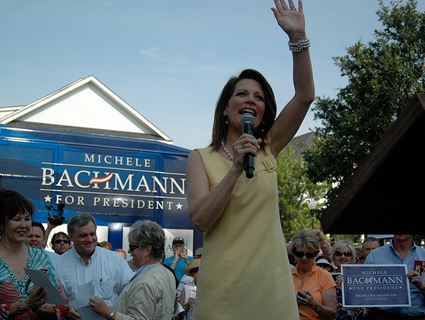 Since we reported last week on Georgia GOPers’ four-hour, closed-door briefing on a planned United Nations takeover of the Deep South, the event’s organizer, Sen. Chip Rogers (R) has dropped his bid for another term as majority leader and distanced himself from the contents of the presentation. On Monday a spokesman told the Huffington Post that Rogers “probably sat politely if he was there, that is his style.”

But the conspiracy in question—that liberals like President Barack Obama are using a mind-control technique called “Delphi” to push a one world government with the aim of foisting sustainable development on the world’s citizens, as outlined in a decades-old UN agreement called “Agenda 21“—actually has much deeper roots. How deep? As Bluestem Prairie blogger Sally Jo Sorensen points out, the Delphi siren was sounded in 2002 by Minnesota Rep. Michele Bachmann’s allies at the education watchdog, the Maple River Education Coalition. That year, when Bachmann was still speaking at group functions and pushing its policies at the state capitol, the MREC hawked a two-page instructional document titled, “Beware the Delphi Technique.” It warned:

The Delphi Technique was developed by the RAND Corporation, a liberal think tank, in the 1960s. It was developed originally as a way of using repeated surveying of a group of people to bring them to agreement or “consensus.”

The original survey technique has been adapted for use in controlling and manipulating meetings or study groups called to get public input for issues in education, police community relations, state control of child care, etc.

Delphi was framed as the vehicle by which central planners at the state and federal level would ultimately break down the walls of sovereignty and push a pantheistic global union. But all was not lost; there was an easy way out: 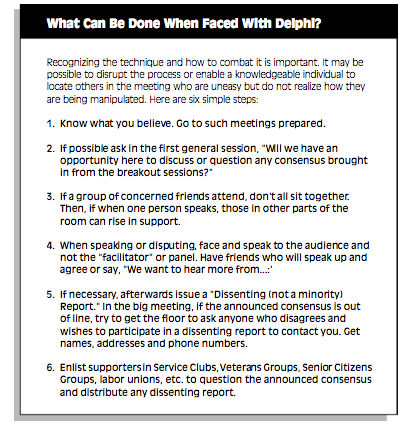 Bachmann, as far as I can tell, never discussed Delphi directly. But it was a pretty integral aspect of the MREC’s push against the Profile of Learning, the Minnesota curriculum standard that launched Bachmann’s career in public life. Beginning in 1998, she criss-crossed the state on behalf of the group and maintained close ties with the MREC during her time as a state Senator in St. Paul. In hearings as a state Senator Bachmann used her platform to push the Agenda 21 conspiracy in a fashion that would have fit in at the Georgia state capitol; she once questioned a panel of professors on whether they supported population controls or intended to ban humans from living in certain areas. She also fretted that the United Nations definition of sustainable development would lead to a moratorium on light bulb production.

In early November, Bachmann scored the narrowest re-election victory of her congressional career despite the fact that her district became more conservative after redistricting. She held off a challenge from Democrat Jim Graves by just one point—in a district that Mitt Romney won by 15. Raving against sustainable development helped launch Bachmann’s career, but if this month’s election results are any indication, her frequently conspiratorial warnings may also be what eventually brings it to an end.