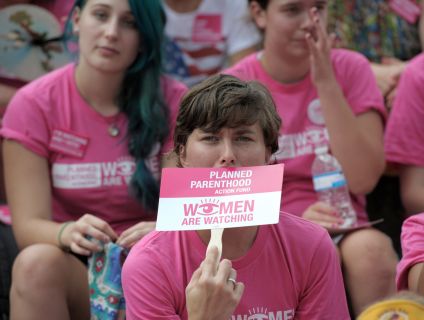 Democrats did well in Ohio on November 6, with President Obama claiming the state’s electoral college votes and Sherrod Brown pulling out a tight race for his Senate seat. But the state’s Republicans weren’t going to let defeat in the statewide races slow them down. Instead, they immediately returned to their pre-election agenda: targeting Planned Parenthood.

On Nov. 14, House Republicans voted in a lame-duck session to advance House Bill 298, which would likely strip public funding for Planned Parenthood in the state.

The Ohio House Health and Aging Committee voted to approve the bill on a party-line vote. The measure will reprioritize how state and federal family planning funds are administered, bumping Planned Parenthood providers to the bottom rung of eligibility. The bill states that priority for the funds should go to state, county, or local government entities. If “all eligible public entities have been fully funded,” then some of the money can go to private groups, but those are also ranked to put Planned Parenthood providers dead last. This would replace the current competitive grant process.

The committee’s chairman, Lynn Wachtmann, is among the Ohio House’s most anti-abortion lawmakers. He is the sponsor of the state’s “Heartbeat bill,” which would ban abortions if a doctor can detect a heartbeat—which can be as early as six weeks into a pregnancy. At the beginning of this term, Wachtmann pledged “push the pro-life agenda as far as we can.”

Wachtmann insists that the bill changing how family funding plans are awarded has nothing to do with abortion—and had some choice words for anyone who accused him of that. “There are Democrats who call us anti-woman—they are abhorrent, crazy people intent on killing every baby they can,” Wachtmann told the Dayton Daily News on Nov. 18.

Democratic lawmakers were somewhat surprised to see HB 298 resurface after the election. The House tried to do the pretty much the exact same thing back in March as part of a budget bill, but ended up scrapping the idea. This particular bill was last introduced in July 2011, but had been dormant since a hearing back in May. “I hoped that cool heads would prevail, and people would maybe take a step back and think about what they’re hearing from the people of Ohio,” Rep. Nickie Antonio, a member of the committee, told Mother Jones. “The people of Ohio are not clamoring for less availability of reproductive healthcare for women.”

Stephanie Kight, president and CEO of Planned Parenthood of Greater Ohio, said that the change would put $2 million in funding for the organization at risk. That’s only about 8 to 9 percent of the organization’s total funding, but it would specifically impact the organization’s Healthy Moms, Healthy Babies program, which provides home visits for young mothers to educate them about caring for newborns and toddlers. About 120 women in two Ohio counties use the program each year. It would also affect funding the organization gets through the Personal Responsibility Education Program (PREP) program, which provides sex education for young people ages 14-19 who are in the foster care and juvenile justice system, and put $1 million in Title X family planning funds that Planned Parenthood receives at risk, potentially affecting the work at the 32 clinics across the state.

Kight said that Planned Parenthood “would certainly try to find the money elsewhere” for those programs, but noted that the grant money is particularly important, because it has been a reliable, steady source of funding.

Proponents of the bill like Ohio Right to Life insist that they just want to prevent Planned Parenthood from hogging funds that could go to other health centers. But as the nonprofit Innovation Ohio pointed out in a recent blog post, only two of the 36 reproductive health and wellness grants and two of the six PREP grants awarded last year went to Planned Parenthood providers.

Kight said the latest effort fits in the broader attack on reproductive rights in the state. “The overall attitude in Ohio has been, ‘How can we make abortion more dangerous and difficult to get?’ rather than ‘Let’s reduce the number of abortions by improving access to education and health care,'” Kight said.

Lawmakers in Pennsylvania are also considering a bill much like Ohio’s. It is unclear whether Ohio’s bill will get a vote in the full House and Senate before the lame-duck session concludes in December. Even if it doesn’t pass in lame duck, the partisan makeup of the legislature did not change much in the November election, so it’s almost certain to come up again next year.

“They are out to kill Planned Parenthood,” said Democratic state Sen. Nina Turner, “and they don’t care how they do it.”