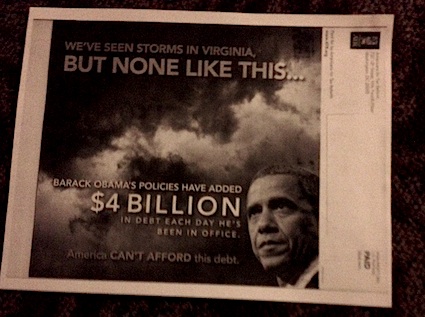 After being sequestered in his northern Virginia apartment for the duration of Hurricane Sandy, 32-year-old journalist Haroon Moghul woke up Tuesday morning to find something odd poking out underneath his doorframe. As Moghul wrote in online magazine Religion Dispatches, it was a photocopied flier of the president’s face superimposed against a turbulent, stormy backdrop. “We’ve seen storms in Virginia, but none like this…” it read, then proceeded to accuse the president of summoning financial disaster.

As the Houston Chronicle, and subsequently Buzzfeed reported Tuesday, the original mailing had been paid for by Americans for Tax Reform, conservative operative Grover Norquist’s “anti-tax” group. It’s unclear who redistributed the flier in the wake of Sandy. Moghul says that neither he nor his building’s front desk manager saw anyone handing them out, though both discovered them on the floor and under doors Tuesday morning. “It seems like they were on every floor,” Moghul says. One neighbor told Moghul that he saw the fliers on cars as early as Saturday.

Americans for Tax Reform denies that it had knowledge of or was involved in the effort to use the flier in the aftermath of Sandy; it sent Mother Jones a copy of an invoice showing that the original mailer was sent out well before the storm was brewing. But regardless of who was sharing the recycled ads, the imagery ATR used on the originals is coming back to haunt them now—it looks particularly tasteless in the wake of the epic hurricane disaster, not least because Norquist’s group has worked hard to block policies aimed at mitigating climate change.

After having fought against cap and trade in 2009, in December, Norquist co-penned a Politico op-ed explaining why his organization is working in a number of states to end renewable energy mandates, measures that require a percentage of the state’s energy to be fueled by resources like hydropower, wind, solar, or biofuels by a target date. Norquist argued that these standards were certain job-killers, citing a study from Suffolk University’s “free-market” Beacon Hill Institute that predicted North Carolina’s renewable energy legislation, for example, would result in thousands of jobs lost. But the Energy Information Administration has shown that a national renewable energy standard would have almost no effect on projected GDP.

Recently, ATR has ramped up its efforts in swing states. In September, the group sent out fliers in Florida tacked with a claim that the Obama administration paid a Chinese company $450 million to construct a wind farm in Texas—a statement Politifact has rated “Pants on Fire.” ATR has also attacked Missouri’s Senator Claire McCaskill* for her support of closing big oil tax loopholes. On Wednesday, ATR released its guide to Michigan ballot proposals and urged residents to vote against an initiative to boost the state’s renewable portfolio standard to 25 percent by 2025.

Last week, the group claimed the EPA was planning a “post-election assault on economy and jobs.” The number-one item on its list of big government evils? Greenhouse gas regulations.

While the person or group who distributed the photocopies of the mailer remains unknown, ATR’s dedication to fighting clean energy standards is very clear—and particularly in light of Sandy’s devastation, it may want to drop extreme weather imagery from its promotional tools. (American Apparel’s marketing department, for the record, probably should have considered that too, before it emailed potential shoppers a hurricane-themed discount for “in case you’re bored during the storm.“)

Correction: The original version of this article misidentified the state for which Claire McCaskill is Senator.