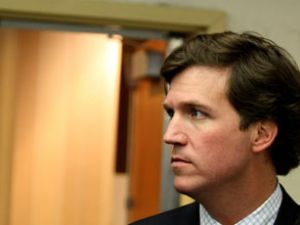 Secretary of Defense Leon Panetta announced Wednesday that the Pentagon plans to lift a 1994 prohibition on women serving in combat roles. The announcement prompted an ill-informed outcry from conservatives, who were perhaps unaware that American servicewomen are already in the line of fire, serving in combat though not doing so in what the Defense Department defines as “combat roles.”

Late Wednesday night, Daily Caller founder Tucker Carlson tweeted, “The administration boasts about sending women to the front lines on the same day Democrats push the Violence Against Women Act,” suggesting an equivalence between choosing to serve on the front lines and being targeted for domestic assault. Carlson followed up: “Feminism’s latest victory: the right to get your limbs blown off in war. Congratulations.”

Carlson is a political journalist, so he might be expected to know that there is a woman US Army veteran amputee named Tammy Duckworth currently serving in Congress. Duckworth, who represents Illinois’ 8th District, lost her legs after an attack brought down the helicopter she was piloting in Baghdad.

In the US military, a woman’s service is not recognized, professionally or financially, the same way as a man’s. Because women have not been eligible for “combat role” positions—even though they were shooting and being shot at—they were denied access to certain career opportunities. The plaintiffs in a lawsuit the American Civil Liberties Union filed against the Department of Defense over the exclusion of women from combat roles offer great examples of this discrimination. Two of the plaintiffs in that case have received Purple Hearts, and two have received combat medals. One of the plaintiffs, Air Force Major Mary Jennings Hegar, a helicopter pilot, was shot down in Afghanistan attempting to evacuate wounded US service members. She engaged in a firefight with enemy forces and was shot before escaping. Women are already “getting their limbs blown off in war.” Panetta’s announcement will ensure they are recognized for it.

The Daily Beast‘s David Frum, appearing on CNN, also raised a misguided objection to the new policy. Frum claimed that servicewomen will face sexual violence from America’s enemies and therefore shouldn’t be allowed to serve on the front lines:

The people we are likely to meet on the next battlefield are people who use rape and sexual abuse as actual tools of politics. In Iranian prisons, rape is a frequent practice. Women are raped before they are executed. In Iran, in Pakistan, in Afghanistan rape is a conscious tool of subjugation and it is something women will be exposed to. In the name of equal opportunity they will face unequal risk.

It’s true that women face the danger of sexual assault if captured. The same could be said of men. Frum’s objection seems somewhat selective; women in the US military are more likely to face sexual assault from their comrades in the service than they are to be killed by enemy fire. Perhaps that’s less sensational than the thought of scary foreigners violating American women, but it’s a more urgent threat.

Most men cannot meet the necessary mental and physical requirements for service in combat. Any woman who can meet those standards should not be denied the opportunity because of an arbitrary gender restriction. Moreover, removing the restriction is not about celebrating militarism. The military has long been a path for historically disfavored groups to claim the full benefits of citizenship. Justifying discrimination against blacks, gays and lesbians, or women becomes much more difficult when they’re giving their lives for their country.