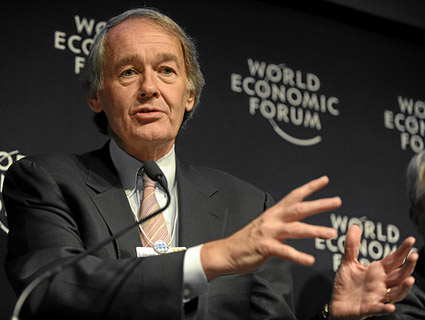 A group of young activists is pairing up with a billionaire philanthropist to try to make the Keystone XL pipeline, and climate change, a central issue in the Democratic primary in Massachusetts.

Tom Steyer, a former hedge fund manager and clean energy evangelist, has spent more than $37 million to pass and defend climate and energy initiatives in California. Now he’s forming a super-PAC to spend on the April 30 Democratic primary for the special election to fill Massachusetts’ empty Senate seat.

Steyer and young environmentalists are targeting Dem Rep. Steve Lynch for his support of the Keystone XL pipeline. Lynch voted for a House bill last year that called for the Obama administration to approve the controversial pipeline. Lynch’s opponent in the primary, Rep. Ed Markey, has the support of a number of environmental groups and opposes the pipeline.

Steyer joined with Craig S. Altemose of the Better Future Project and three other Massachusetts college students to write a open letter to Lynch on Monday demanding he change his position on the pipeline:

Because climate change is such a serious issue, and because it is on the ballot as never before, we are asking you, Congressman Lynch, today to do one of two things by high noon on Friday, March 22. Either act like a real Democrat and oppose Keystone’s dirty energy. Or, get a sworn, binding statement – with securities law enforcement – from TransCanada and the refiners that all of the Keystone-shipped oil will stay here.

If Lynch doesn’t change his tune, they wrote, Steyer will then “immediately launch an aggressive public education campaign” against Lynch. In an interview with Mother Jones, Chris Lehane, a spokesman for Steyer, declined to say how much they would spend on such a campaign, but said it would include paid media, get out the vote work, and field campaigns.

Steyer became involved in the Massachusetts race after Altemose and the other young activists reached out. ?Altemose said their effort is “less of an endorsement of Markey and more a repudiation of Lynch’s actions.” The campaign, he said, is designed to “make sure there’s political consequences for disregarding future generations.”

“For someone to believe they can represent Massachusetts and be supporting policies that take us backward to the dirty energy past is just mind boggling,” Altemose said.