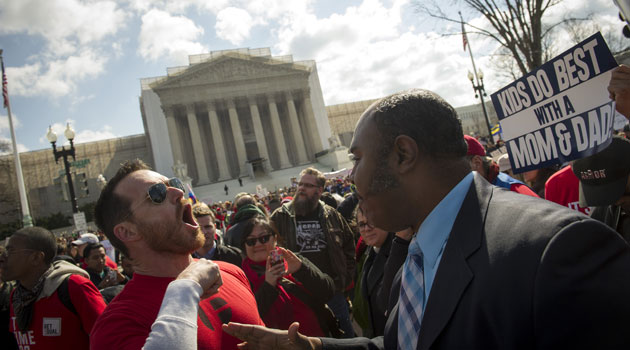 Two men argue over the topic of gay marriage in front of the Supreme Court of the United States, as the nation's highest court heard oral arguments on constitutionality California's Proposition 8, regarding same-sex marriage.Rod Lamkey Jr./Zuma

Former Solicitor General Paul Clement, who was chosen by House Republicans to defend the constitutionality of the Defense of Marriage Act before the Supreme Court, had previously argued that people can change their sexual orientation, that marriage is only for couples that can produce children, that gay and lesbian couples could be worse parents than heterosexuals, and that barring same-sex marriage “encourage[s] heterosexual relationships.”

But in a sign that the anti-same-sex marriage crowd may be losing faith in its own rhetoric, Clement didn’t deploy any of those arguments at the Supreme Court on Wednesday. Instead, he stuck to trying to convince the justices that the Defense of Marriage Act didn’t infringe on the states’ power. Clement insisted that defining marriage as between one man and one woman was acceptable because the federal government needs to characterize marriage for its own purposes. Clement never bothered trying to prove that excluding same-sex couples from marriage is a valid government interest in and of itself. Consequently, he never had to unleash his most controversial arguments. There was nothing in his case for DOMA that mirrored the apocalyptic conservative language of the last decade warning that same-sex marriage could lead to the downfall of Western civilization.

Clement had good reason to tone it down. A day earlier, former Reagan-era Justice Department official Charles J. Cooper, defending California’s ban on same-sex marriage, had not fared so well. When Cooper argued that California was justified in enacting the ban because of “society’s interest in responsible procreation,” Justice Elena Kagan asked if it would be constitutional to ban marriages between infertile couples. When Cooper argued that it’s possible that same-sex marriage harms children, Justice Anthony Kennedy pointed out that there were already more than 40,000 children being raised by same-sex couples in California. Asked by Kennedy and Kagan how same-sex marriage could have a negative effect on “traditional” marriages, Cooper couldn’t offer any examples.

Oral arguments may not sway the justices themselves, but they can affect how the public sees the case. And Cooper’s case against same-sex marriage looked terrible: not rooted in any evidence, and founded on moral disapproval of homosexuality or simple prejudice.

Clement had made many of Cooper’s arguments in legal briefs he filed months ago with the court in advance of the arguments. But on Wednesday, Clement acted as if the questionable assumptions about homosexuality in his brief didn’t exist. He never referred to the argument that sexual orientation is a choice, which the American Psychological Association says is wrong. (This mistaken notion has led to a harmful industry of charlatans who claim they can purge people of their unwanted same-sex attractions.) Clement didn’t claim that marriage is only for couples who can procreate—or he might have found himself in the same awkward position as Cooper, trying to explain why the government cannot also ban marriages between couples too old to have children. Clement also didn’t assert that being raised by same-sex parents might be bad for children. (The APA, citing social-science research, has stated, “the development, adjustment, and well-being of children with lesbian and gay parents do not differ markedly from that of children with heterosexual parents.”) Clement didn’t maintain that banning same-sex marriage was necessary to “encourage” heterosexual relationships.

The Democratic appointees on the court did repeatedly attempt to force Clement to defend the underlying anti-gay bias of the Defense of Marriage Act, which was passed in 1996. “Well, is what happened in 1996—and I’m going to quote from the House report here—is that ‘Congress decided to reflect and honor our collective moral judgment and to express moral disapproval of homosexuality’?” Kagan said. “Is that what happened in 1996?”

Clement replied that the court shouldn’t strike down the Defense of Marriage Act “just because a couple of legislators may have had an improper motive.” Clement was in a tight spot. He had to concede that “moral disapproval” was an “improper motive” for the law because of prior Supreme Court decisions finding that “moral disapproval” doesn’t justify a law that discriminates against a group of people. But would any supporters of the Defense of Marriage Act deny that their opposition to same-sex marriage was motivated by “moral disapproval” of homosexuality? Of course not. That’s the bottom line.

So Clement avoided looking like a homophobic crank while arguing that same-sex couples shouldn’t have the same rights as everyone else. Sticking to the federalism argument may have been a tactical decision to avoid alienating Justice Kennedy, who is sympathetic to gay and lesbian rights. Or it could be that the lawyer chosen by anti-gay advocates to make their case realizes that they don’t have much of one left.