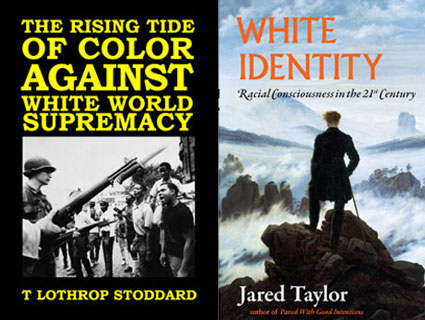 On Tuesday, the Hill published a story noting that the organizers of the upcoming Conservative Political Action Conference (CPAC), the preeminent national confab for politicians and activists of the right, are responding to the last November’s election by using the event to “showcase the movement’s ‘diversity.'” Mitt Romney, Paul Ryan, and Sarah Palin will be headlining, but 20 percent of the panelists this year will be African American, according to CPAC bean counters. And the CPACers proudly point to the prominent role of Latinos and women on various panels. Yet the CPAC organizers have neglected one important task as they attempt to appeal to minorities: staying away from white nationalists.

For the past week, the American Conservative Union, which founded and is the primary organizer of CPAC, has showcased on its website an article from its newsletter, the Conservative Battleline, headlined “Debating Liberal Tactics” and written by Robert Weissberg. The ACU identifies Weissberg as a professor from Cornell and the University of Illinois-Urbana-Champaign and the author of 11 books. What it doesn’t mention is that Weissberg has long been affiliated with a pseudo-think tank called the New Century Foundation. This foundation publishes a magazine called American Renaissance and hosts conferences under the same name, promoting the theory of “scientific racism” and providing a forum in which Klan members, neo-Nazis, and David Duke followers can mix it up with the intellectuals of the white-nationalist movement. The Southern Poverty Law Center describes the foundation’s founder and American Renaissance editor, Jared Taylor, as a “courtly” white supremacist, who once wrote in American Renaissance, “Blacks and whites are different. When blacks are left entirely to their own devices, Western civilization—any kind of civilization—disappears.”

Weissberg has been writing for Taylor’s magazine for years and has spoken at American Renaissance conferences. The Institute for Research and Education on Human Rights (IREHR), a nonprofit social-justice organization that tracks far-right groups, has been sounding the alarm about Weissberg this week and first called attention to his work on the ACU website. It has assembled a history of his racist work here. Among the highlights—or lowlights—is a speech Weissberg delivered at a 2012 American Renaissance conference on a “Politically Viable Alternative to White Nationalism,” in which he argued that white racism needed an image update. He suggested that white people retreat into “Whitopias” that carry zoning codes and other subtle requirements that would keep out the “undesirables,” according to IREHR.

IREHR dug up a video of Weissberg, who is Jewish, giving a speech in 2000 entitled “Jews and Blacks: Everything the Goyim Wanted to Know But Were Afraid to Ask,” in which he puzzled over Jewish support for civil rights—a problem he dubbed “an affliction”—and suggested that non-Jewish whites and Jews should team up to fight against the blacks and what he termed African Americans’ hatred of education and learning. Here’s that speech:

Following up on that theme, Weissberg recently published a book called Bad Students, Not Bad Schools, which blames black and Latino students for wrecking the American public school system with their genetically low IQs. (On Amazon, the book features a glowing review from fellow white nationalist John Derbyshire, and is “frequently bought” with a book on education by Bell Curve author Charles Murray.)

Such work, and Weissberg’s affiliation with American Renaissance, got him booted from the pages of National Review last year after IREHR raised the issue. Editor Rich Lowry explained at the time:

Unbeknownst to us, occasional Phi Beta Cons contributor Robert Weissberg (whose book was published a few years ago by Transaction) participated in an American Renaissance conference where he delivered a noxious talk about the future of white nationalism. He will no longer be posting here. Thanks to those who brought it to our attention.

An ACU spokesman hasn’t responded to a request for comment from Mother Jones.

Maybe it’s progress that Weissberg is only on the ACU website and not speaking at CPAC. Last year, the ACU gave a microphone to several white nationalists who headlined a panel titled, “The Failure of Multiculturalism: How the Pursuit of Diversity Is Weakening the American Identity.” Among the panelists was Derbyshire, who also has been kicked out of the National Review editorial lineup for his racist writings; Peter Brimelow, the founder of the nativist site VDARE, which publishes the work of many other anti-Semitic and white-supremacist writers; and Robert Vandervoot, who’s also affiliated with American Renaissance and the nativist group Pro-English.

Two board members of Young America’s Foundation, which cofounded and sponsors CPAC along with the ACU, run a political action committee that gave money to a white-nationalist group, as my colleague Nick Baumann documented earlier this year here. As Baumann noted, Ron Robinson, one of the YAF board members in question, is also on the ACU’s board.

The conservative movement will continue to have a tough time appealing to minorities if it keeps cavorting with these folks, no matter how many African Americans appear on their panel discussions.