Fossil fuel cheerleaders take note: Renewable energy ain’t going nowhere—and it may prove to be the better bet in the long run.

By 2030, renewables will account for 70 percent of new power supply worldwide, according to projections released today from Bloomberg New Energy Finance. Bloomberg analysts examined gas prices, carbon prices, the dwindling price of green energy technology, and overall energy demand (which, in the US at least, is on a massive decline), and found solar and wind beating fossil fuels like coal and natural gas by 2030.

The chart below shows annual installations of new power sources, in gigawatts; over time, more and more of the new energy supply being built each year comes from renewable sources (like wind turbines and solar panels), by 2030 representing $630 billion worth of investment, while new fossil fuel sources (like coal- or gas-burning power plants) become increasingly rare. 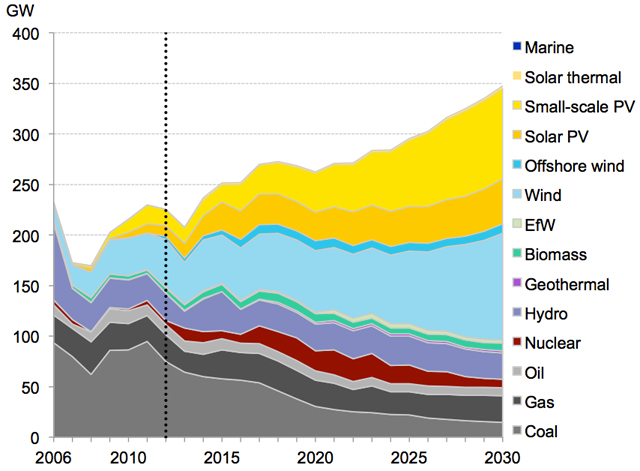 The effect of this projected growth, BNEF CEO Michael Liebreich told Climate Desk at a gathering of clean energy investors today in New York, is that damage to the climate from the electricity sector is likely to taper off even as worldwide electricity use grows. “I believe we’re in a phase of change where renewables are going to take the sting out of growth in energy demand,” he said.

But that doesn’t mean we’re out of the woods yet: Fossil fuels have such a historic grip on the power market that even this projected massive growth isn’t enough to tip the scales fully towards sustainability. By 2030, non-renewable sources will still account for half of the world’s total power supply, according to the analysis. The chart below shows the world’s total energy use, again in gigawatts; while total use grows, more comes from renewable sources: 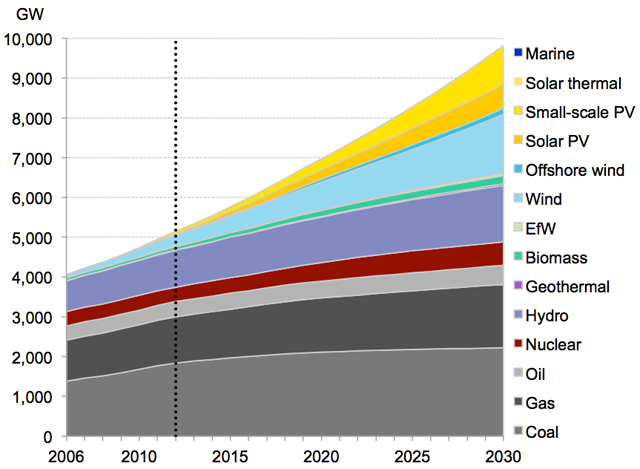 Liebreich cautioned that the accuracy of BNEF’s projection will hinge on China, which may have up to 50 percent more natural gas than the United States and seems to be on the brink of a fracking gold rush. The question, Liebreich said, is how renewables investors might react if China is able to exploit its gas resources cheaply. For now, he said the renewable renaissance is driven mainly by the bottom line: High returns and ever-cheaper technology make putting money into renewables good business. “If it’s attractive to the investors,” he said, “they invest.”