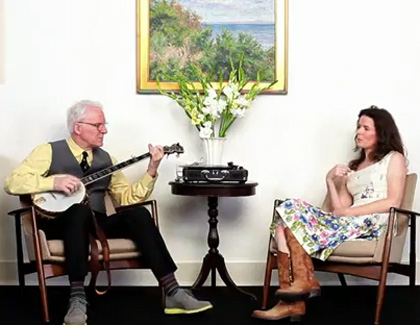 When Steve Martin played singer Edie Brickell a banjo tune he’d been working on, lyrics flooded into her mind as if she were recalling a preexisting song. She recorded the melody and sent it back to Martin, who began emailing her file after file of his banjo compositions, sometimes two a week, over which she’d quickly layer stories. “I’d just hear the tune and there were all these images and pictures,” says Brickell of Martin’s picking. “All you had to do was pull the lyrics out of the air.”

From the alchemy of Martin’s inventive five-string banjo strumming and Brickell’s breezy and timeless twang emerged Love Has Come For You, out Tuesday, an intimate and stripped down album that centers on family lore, small-town gossip, and scorned love.

“I’d just hear the tune and there were all these images and pictures,” Brickell says. “All you had to do was pull the lyrics out of the air.”

Actor and comedian Steve Martin likely needs no introduction—he’s starred in classic comedies like Roxane, Three Amigos, Parenthood, and Father of the Bride—but his musical accomplishments still might catch you by surprise. He’s played banjo since age 17, won Grammys in 2001 and 2009 for his instrumentals, and began touring with the bluegrass band the Steep Canyon Rangers in 2009. Edie Brickell shot to fame in the late 1980s as the frontwoman for the New Bohemians, with hits like the indignant “What I Am” and “Circle of Friends,” followed by a marriage to Paul Simon and successful solo career (though she never repeated such a genius album name as Shooting Rubberbands at the Stars).

Brickell, who says she and Martin met at a dinner party in 1992, told me a little more via email about Love Has Come For You:

About two years ago, as we were exiting a restaurant, he asked me if I had ever considered singing in a group without drums. Our conversation was interrupted by the bustle of everyone leaving and saying their goodbyes, but it got me thinking. I saw him at a birthday party months later and felt brave enough to tell him how much I loved his music and if he ever wanted to make up a song together, it was my favorite thing to do.

Excited to work on a country album for the first time, Brickell tapped into her family history:

My grandmother, Twomama, was one of 11 children and we were very close to her and her sisters when I was growing up. They were at our place all the time playing cards, laughing, cussing and telling funny stories from Paris, Texas, where they were raised, or gossiping about what the other sisters were up to! The strength and humor they possessed through hard times really touched me. They were true to themselves and to each other with a kind of raw honesty that was both comforting and disconcerting.

The album cover, a Martin Mull painting owned by Steve Martin, reflects this emphasis on the homegrown. “I just thought it was just offbeat enough,” Martin says. “Nobody, including the record company, said ‘well let’s look at some other ideas.’ Everybody liked it, and that’s really rare.” (Watch the video below for more on this painting).

Even after Brickell and Martin sent their demo to producer Peter Asher, included the voices of former Nickel Creek members Seth and Sara Watkins, guitar from Waddy Wachtel, and the elegant bass of Esperanza Spalding, the album retains a pared down feel. Martin’s banjo is central to each composition—a singer in its own right, it’s often the most interesting part of the tune. Brickell’s smooth vocals and lyrics are the work of an obvious poet, earnest recollections peppered with the unexpected, as in “Sun’s Gonna Shine”: “You got the power, you got the faith, you got the El Camino, you got the night, you got the day, I got the ole dark cloud.”

I sometimes wished there could be more energy and edge to the melodies. A short old-timey number, “Yes She Did,” which also features Martin singing, was one of the album’s strongest moments, with Brickell’s voice breaking into new levels of expression and control, as the banjo scurries along like a hound dog on the chase.

In other moments, Love Has Come For You presents a juxtaposition between old and new. Martin’s banjo conveys an emo angst with a pop thrust in the numbers “Fighter” and “King of Boys,” a clear departure from the vintage sensibility of the other songs. Brickell’s lyrics took me by surprise in this way, too; on the opening track, she sings: “When you go to Asheville / send me an email / tell me how you’re doin’ / how it’s treating you.”

For all the album’s emphasis on country living, barn dancin’, train calls, and family picnics with fried chicken, it’s rooted in the present with flickers of modern wit. Combined with the evocative banjo, that element makes this graceful collaboration really hum.