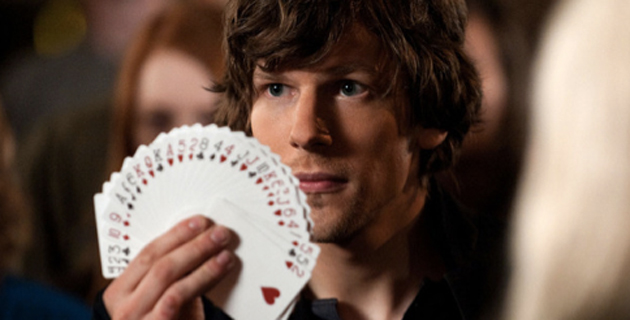 Jesse Eisenberg prepares for his roles the same way just about any other responsible actor would: He does his research.

In 2007’s The Hunting Party, Eisenberg played a TV news reporter and wannabe war correspondent. The film, also starring Richard Gere and Terrence Howard, is loosely based on an Esquire article from October 2000 that tells the true story of how three American and two European journalists accidentally set off an international incident after drunkenly deciding to hunt for a fugitive Serbian war criminal hiding out in Bosnia. To prepare for this role, Eisenberg hung out with members of the real-life “party,” which included author and war correspondent Sebastian Junger (whom Eisenberg calls a “total badass”).

In 2010’s The Social Network, Eisenberg played Facebook founder Mark Zuckerberg, a role that earned him his first Oscar nomination. To prepare, Eisenberg “read everything [he] possibly could” on Zuckerberg and activated a phony account on Facebook—a website he claims he had never seen before gearing up to play Zuckerberg.

His latest film, released on Friday, is action director Louis Leterrier’s Now You See Me (Summit Entertainment, 116 minutes).  Eisenberg plays J. Daniel Atlas, a cocky Vegas illusionist who steals from the wealthy and wicked and then literally showers the money onto his working-class audiences. Eisenberg teams up with Woody Harrelson, Isla Fisher, and Dave Franco as a band of Robin Hood-like criminals who routinely outsmart and mystify an FBI agent played by Mark Ruffalo and an Interpol officer played by Mélanie Laurent.

To prep for this “intense character,” as he put it, the 29-year-old actor became an amateur magician.

Any time his character executed an impressive trick—cards, handcuffs, disappear/reappear, etc.—Eisenberg says he wanted to know how he would pull that off in real life. He started by reading a lot about the history of magic and illusionists, but quickly realized that he needed to take a more hands-on approach. “I practiced every day, walked around with a deck of cards everyday, and just became proficient in some basic slight-of-hand moves,” Eisenberg tells Mother Jones. “My character would have been practicing for 25 years, 8 hours a day; that’s what these guys do—all of them. They all walk around with a deck of cards in their hand.”

“I kind of knew how they did a lot of it because I understand, like, 10 basic principles.”

Now You See Me‘s magic consultant David Kwong took Eisenberg to live performances of some of the industry’s heavy-hitters—Penn & Teller, David Blaine, and David Copperfield. “I kind of knew how they did a lot of [their tricks] because I understand, like, 10 basic principles,” Eisenberg says. He declined to reveal any trade secrets. “How [do] you make a big thing disappear? How do you make a motorcycle appear on a table when there’s no motorcycle?”

Now You See Me is a mixed-bag of a thriller, exhilarating and thoroughly enjoyable in chunks and perfunctory and sloppy in others. The film, for the most part, is good fun that won’t however draw the level of critical praise that Eisenberg has enjoyed in the past few years. At the very least, this role allowed him to live out some fantasies from his childhood. As a kid, he says, his mother worked as a birthday party clown but she would never perform at his birthday parties due to the “conflict of interest” and the potential embarrassment among his friends. So his mom “bartered” with a local magician to perform at his birthday parties instead.

“I was always frustrated by magic,” Eisenberg recalls, because he didn’t know how it worked. “So I liked being able to do this movie and finding out how things were done.”

Listen to the full roundtable interview I participated in with Eisenberg in Washington, DC (audio courtesy of WTOP film critic Jason Fraley):

And check out Now You See Me‘s theatrical trailer:

Now You See Me gets a wide release on Friday, May 31. The film is rated PG-13 for language, some action and sexual content. Click here for local showtimes and tickets.