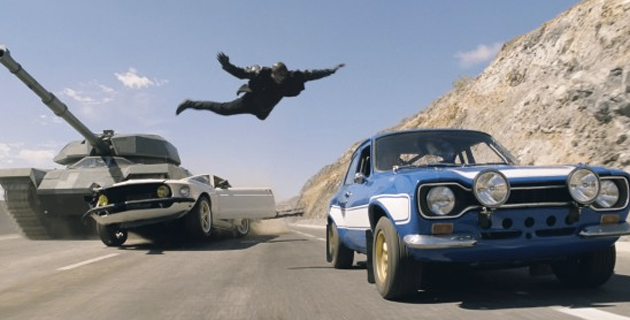 Hands down, Fast & Furious 6 is by far the best movie ever made to feature Ludacris and Tyrese trapped in a Jeep dangling inches off the ground from an imperiled cargo plane.

And there is so, so much more to cherish about the film.

The Fast & Furious franchise has become genuinely fascinating over the last couple of years. One of the most fascinating things about the series is the addition of Dwayne “The Rock” Johnson as the ultra-brawny Diplomatic Security Service agent Luke Hobbs, a character who seemingly cannot go ten minutes without torturing somebody for information. Another fascinating thing is that after a long stretch of churning out barely passable B-movies, the series somehow managed to produce critically acclaimed entertainment, starting with 2011’s Fast Five. (The sixth film has received similarly high marks.) Credit for the newfound critic-and-crowd-pleasing goes to Taiwanese-born American filmmaker Justin Lin, who initially demonstrated the full extent of his directorial talents with the stereotype-subverting independent film Better Luck Tomorrow in 2002.

But the single most fascinating thing about the series so far is the enormous tank in Fast & Furious 6. The tank is arguably the main character in the movie.

Not to give away too much of the, uh, plot, but the film involves the latest globetrotting adventure of Vin Diesel, Paul Walker, Michelle Rodriguez, The Rock, and their friends. The criminal/cop team go from country to country driving fast cars, having shoot-outs with international thieves, and flipping the middle finger to NATO. Eventually, the villains get their hands on a terrifying tank, resulting in a profoundly over-the-top chase sequence on a crowded highway where cars are pulverized, bodies fly through the air, and innocent civilians bolt for cover. The scene includes polished lines of loud, panicked dialogue such as, “SOMEBODY DO SOMETHING, I GOT A TANK ON MY ASS.“

It’s amazingly fun to watch, and perhaps the most audacious set piece the Fast & Furious crew has pulled off, yet. And courtesy of this short featurette titled “They Got A Tank!” we known the story behind this marvelous tank that tries to kill Tyrese and Vin Diesel. “That sequence was the hardest because we used real tanks, and we knew that if the tank hit something it’s not supposed to hit, it’s destroyed—there is no forgiveness,” says second unit director Spiro Razatos.

Government officials pretty much issued Justin Lin carte blanche to take over a major road and start blowing up everything in sight.

The marvelous Herculean vehicle is a custom-designed (souped-up, if you will) Chieftain battle tank that the Fast & Furious team tricked-out to drive 60 MPH—twice as fast as the original battle tank’s top speed. The American Hero who drove the tank is Lee Millham, a highly regarded and award-winning stunt performer who also worked on The Dark Knight Rises, Snow White and the Huntsman, and the upcoming World War Z.

This part of Fast & Furious 6 was shot on the Canary Islands, a Spanish archipelago, where local bureaucrats were more than just a bit enthusiastic about production. The way Lin tells it, government officials pretty much issued him carte blanche to take over a major road and start blowing up everything in sight—from bridges to staged oncoming traffic—in the name of good cinema. “To have the Tenerife and Gran Canaria governments say, ‘Hey, yeah, come over, we have this brand new highway you can wreck,’ it made all the difference,” Lin said. Canary Islands officials did not respond to requests for comment, and tank operator Lee Millham could not be reached for comment.

Now watch the full “They Got A Tank!” featurette, which shows the crew on-set reviewing the tank-scene choreography—with a little help from children’s toys:

Fast & Furious 6 gets a wide release on Friday, May 24. The film is rated PG-13 for extreme YOLO. Click here for local showtimes and tickets.