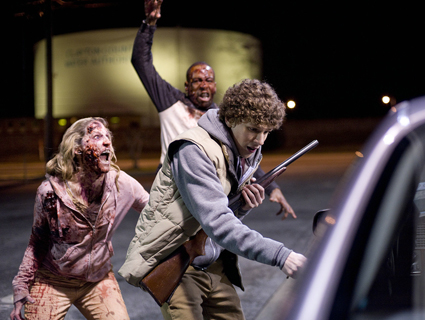 The 2009 action-comedy "Zombieland," starring Jesse Eisenberg (above) and Emma Stone, is one of the films that the NRA's magazine has endorsed as really awesome.Columbia Pictures

When conservatives try to list their favorite pop-culture items to make a political point, the results are often baffling. In 2005, Human Events released the list of “Most Harmful Books” written in the 19th and 20th centuries (Charles Darwin and John Stuart Mill are put in the same league as Hitler and Mao). The following year, National Review compiled a much-discussed “50 greatest conservative rock songs,” which for whatever bizarre reason included Aerosmith’s “Janie’s Got a Gun.” In 2012, the Telegraph declared their brazenly idiotic “top 10 conservative movies of the modern era.” And just over a week ago, the American Enterprise Institute posted the “21 greatest conservative rap songs of all time,” which prominently features Justin Bieber.

And now American Rifleman, the National Rifle Association’s shooting and firearms consumer magazine, has published its official list of the 10 “Coolest Gun Movies.” Writes American Rifleman blogger Paul Rackley, “Many of these movies also take us back to simpler times, when dreaming of saving the day got us through that oh-so boring class.” Here’s his list:

As you may recall, the NRA’s Wayne LaPierre held a high-profile press conference in response to December’s Newtown massacre in which he unleashed a tirade against the stylized violence of Hollywood, cable TV, and the video game industry, blaming their products for gun deaths in America. So it’s a little weird that the organization’s “127-year-old flagship publication” is so eager to glorify what their leadership has decried as the “filthiest form of pornography.” (The NRA did not respond to Mother Jones‘ request for comment on the matter.)

What’s also ironic is that Rackley, who recently blogged in tribute to police officers who had been gunned down in the line of duty, is praising a film for portraying a criminal’s brutal rise to power, which includes audaciously gunning down a police captain in public. “Who has not dreamed of having the power and respect of Michael Corleone?” Rackley opines. “That he built his empire through violence is only that much more alluring.” Furthermore, it’s a huge stretch to classify The Godfather as a “gun movie,” as it is a modern Shakespearean tragedy about family and power where the gunplay is practically incidental. Calling it a gun movie is like calling Top Gun a romantic comedy simply because it includes funny moments and a romantic subplot.

The inclusion of Zombieland, which feels more like an appeal to younger audiences than a serious entry in an all-time top 10 list, comes with this odd assertion: “Sure, the idea of a zombie apocalypse is pretty far-fetched, but it has introduced a new group of people to preparedness and firearms.” There is no evidence anywhere that this 2009 genre homage starring Jesse Eisenberg and Emma Stone did anything to introduce more people to gun culture or prepper tactics anymore than Steve Carell’s Seeking a Friend for the End of the World did. For Christ’s sake, it’s a comedy about Woody Harrelson fighting zombies.

All in all, this list is a mix of puzzling and obvious entries backed up with logic that flies in the face of everything the NRA claims to stand for. Should American Rifleman again decide to plug “cool” gun movies that jibe with NRA sensibilities, I have one suggestion: G.I. Joe: Retaliation, a 2013 action flick in which the bad guy is a Democratic, foreign-born imposter of a president who is only stopped when a courageous team of gun-toting insurgents—led by a politically incorrect Army veteran who hoards a large arsenal of assault weapons in his home—takes matters into their own hands.

Also: If you’re looking for a “cool gun movie” that is a) fun, and b) actually does push back on NRA propaganda, check out 2007’s Shoot ‘Em Up, starring Clive Owen and Monica Bellucci. It is possibly the only over-the-top, blood-drenched popcorn movie ever made to gleefully trumpet a pro-gun-control message. Here’s the trailer: